In September 1988, the face-lifted compact class range was shown at the Paris Motor Show, six months after the 1,000,000th car of the 201 series had been produced in Bremen. The main aspects of the facelift were styling alterations to the body and the redesign of the interior. The most noticeable distinctive feature of the face-lifted models were the side protection bars with integrated longitudinal sill trims, which had been introduced with the coupés of the 124 series in similar form. Fairing and rear apron were now drawn further down and provided with more voluminous bumpers, which allowed for a higher energy absorption thanks to new support elements and modified  impact absorbers. With the fairing borrowed from the 190 E 2.6, uplift at the front axle could be reduced further. Downstream at the rear had been optimized through a modified rear apron. An additional improvement was in the right exterior rear-view mirror, which from now on came as standard. The redesigned interior conveyed a comfortable and spacious impression, and was characterized by better knee and head room in the rear as well as revised seats.

At the same time, the new 190 E 2.5-16 was presented, replacing the 16-valve 2.3-liter version after four years. The 2.5-liter engine, developed from its predecessor by increasing the stroke, had 195 hp in the catalyst version, an increase of 25 hp over its predecessor. On its surface, nothing had changed on the sixteen-valve car, apart from the type label, the right rear-view mirror, and two new paint options. Besides the two colors available on the predecessor, the new metallic paint options “almandine red” and “astral silver” could be ordered.

The 190 E 2.5-16 was also the basis for the racing touring cars used in group A of the  German touring car championship (DTM). However, the existing engine did not meet the requirements of use in racing: It did not have the right relation between bore and stroke, was unsuitable for operation at high revs because of its long stroke, and offered no leeway for performance optimizing measures. It immediately suggested itself to build an entirely new engine with the same displacement. The FIA regulations, however, accepted a new engine in a homologized car only, if it finds its way into series production with a proportion of at least ten percent during its development.

This meant that with a group A car, of which 5,000 had to be built, at least 500 units had to be equipped with the new engine. Since, with the new 190 E 2.3-16, there already was an homologized base model, this was now possible.

As a result of the development, the 190 E 2.5-16 Evolution was presented at the Geneva Motor Show in March 1989. The new, high-revving 2.5-liter engine had 195 hp in its standard form, but was prepared for further tuning. In view of the planned racing applications, the suspension and brakes had been modified, and 16-inch wheels had been used. Body alterations included a prominent rear spoiler, an enlarged rear wing with a triangle wedge, as well as bigger wheel well cut-outs with significantly extended fenders. Within three months, 502 units painted in “blue- black metallic” were built and distributed to customers interested in motorsports via the sales organizations.

A year later, also at the Geneva Motor Show, a further development was shown, the 190 E 2.5-16 Evolution II. This engine had 235 hp and correspondingly improved performance. Suspension and brakes were largely unchanged, but 17-inch wheels were now used. The body was modified again to reduce wind resistance and increase down-force on the front and rear axle. The front and rear bumpers with integrated spoilers were newly designed, as were the fender extensions integrated into the body line and the distinct rear wing. Again, 502 units of the “Evo II” were produced within few months, painted in “blue-black metallic” like the predecessor.

From February 1989, all Diesel cars were provided with improved engines as a part of the "Diesel '89" initiative. Improved combustion led to 40 % less particle emission and thus fulfilled the strict American regulations even without a particulate filter working nearly smoke-free. This progress was made possible by a newly constructed precombustion chamber with oblique fuel injection, which ensured an efficient combustion process. Additionally, the injection pump of all naturally aspirated diesel engines had been provided with an altitude compensator to keep emissions low even when driving at high altitudes. A pleasant side-effect of this new diesel technology was the boost in power of 3 hp for the 190 D and 4 hp for the 190 D 2.5. Turbocharged diesel models had been equipped with a comparable technology, adapted to the requirements of engines with forced induction. The 190 D 2.5 Turbo offered 126 hp from then on. An elaborate emission control system reduced the emissions furthers through a combination of a oxidation catalyst developed specifically for diesel engines with a thoroughly adjusted exhaust gas recycling. This highly efficient system was available from October 1990 for naturally aspirated diesel cars, half a year later also for turbocharged models as an optional feature.

In March 1990, the 190 E 1.8 with a newly developed 1.8-l injection engine replaced the basic 190 after seven years. As the 200 and 200 T were also discontinued at the same time, this meant the end of an epoch for Mercedes-Benz: no cars with carburetors were on sale on the home market anymore. The new 1.8-liter engine was a short-stroke version of the old 2-liter developing 109 hp with a catalyst. The mechanically and electronically controlled injection system Bosch KE-Jetronic was kept.

In January 1991, all compact class models were improved again. All models except the 190 D and 190 E 1.8 were fitted with ABS as standard equipment as well as with a center console below the dashboard. A distinctive feature of the ’9 1 models were the rear view mirror casings painted in the car color. The 190 E, now called the 190 E 2.0, had 3 hp more and the 190 E 2.3 had 4 hp more due to an improved, exhaust system with less resistance. Both models now had a dual tailpipe like the six-cylinder type.

In March 1992, when the 201 series production came to an end, three special edition models on the basis of the types 190 E 1.8, 190 E 2.3 and 190 D 2.5 were presented, which were supposed to enrich the model program with three modern and youthful options and which met the established standard regarding technology and body. The “Avantgarde” models, designed by a team of international female Mercedes-Benz designers, surprised through exceptional design features, fresh and modern colors as well as fine materials as standard equipment. The 190 E 1.8 AVANTGARDE ROSSO came, as the name is suggesting, in a vigorous red pearl-color paint, the 190 E 2.3 AVANTGARDE AZZURRO in cool metallic blue, and the 190 D 2.5 AVANTGARDE VERDE in dark green shimmering pearl-color paint. All three “Avantgarde” models were produced in a onetime limited edition of altogether 4,600 units.

More than ten years after the launch production of the first generation compact-class came to an end at the Sindelfingen plant in February 1993. The 190 was still manufactured in Bremen until August, mainly for export. A total of 1,879,629 cars produced shows clearly how successful this new Mercedes-Benz model line was. Its successor was the 202 series C-Class, which went into serial production in February/May 1993. 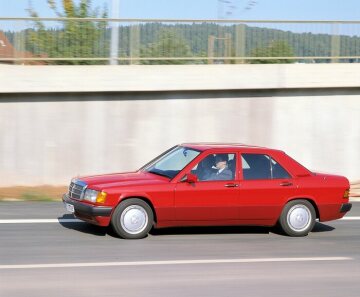 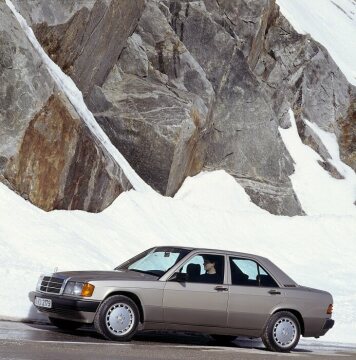 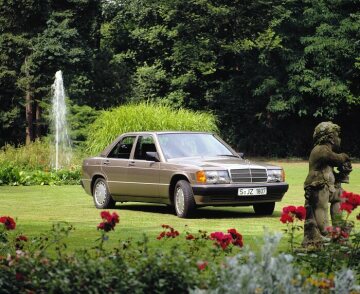 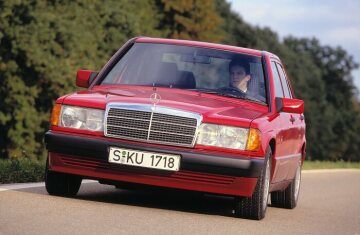 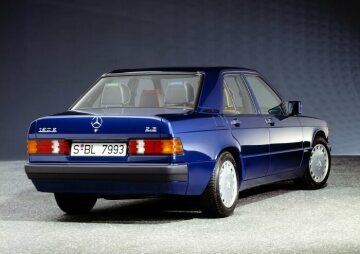 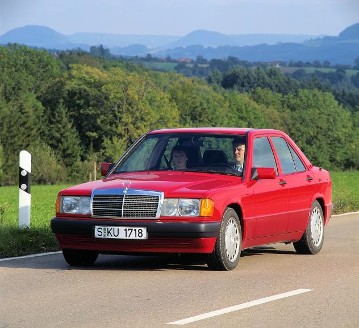 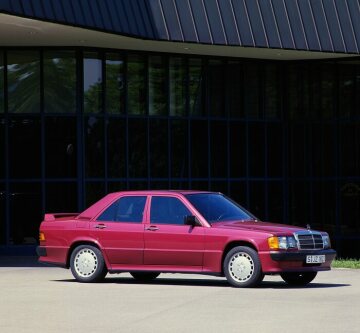 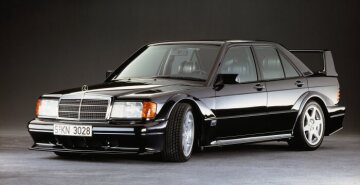