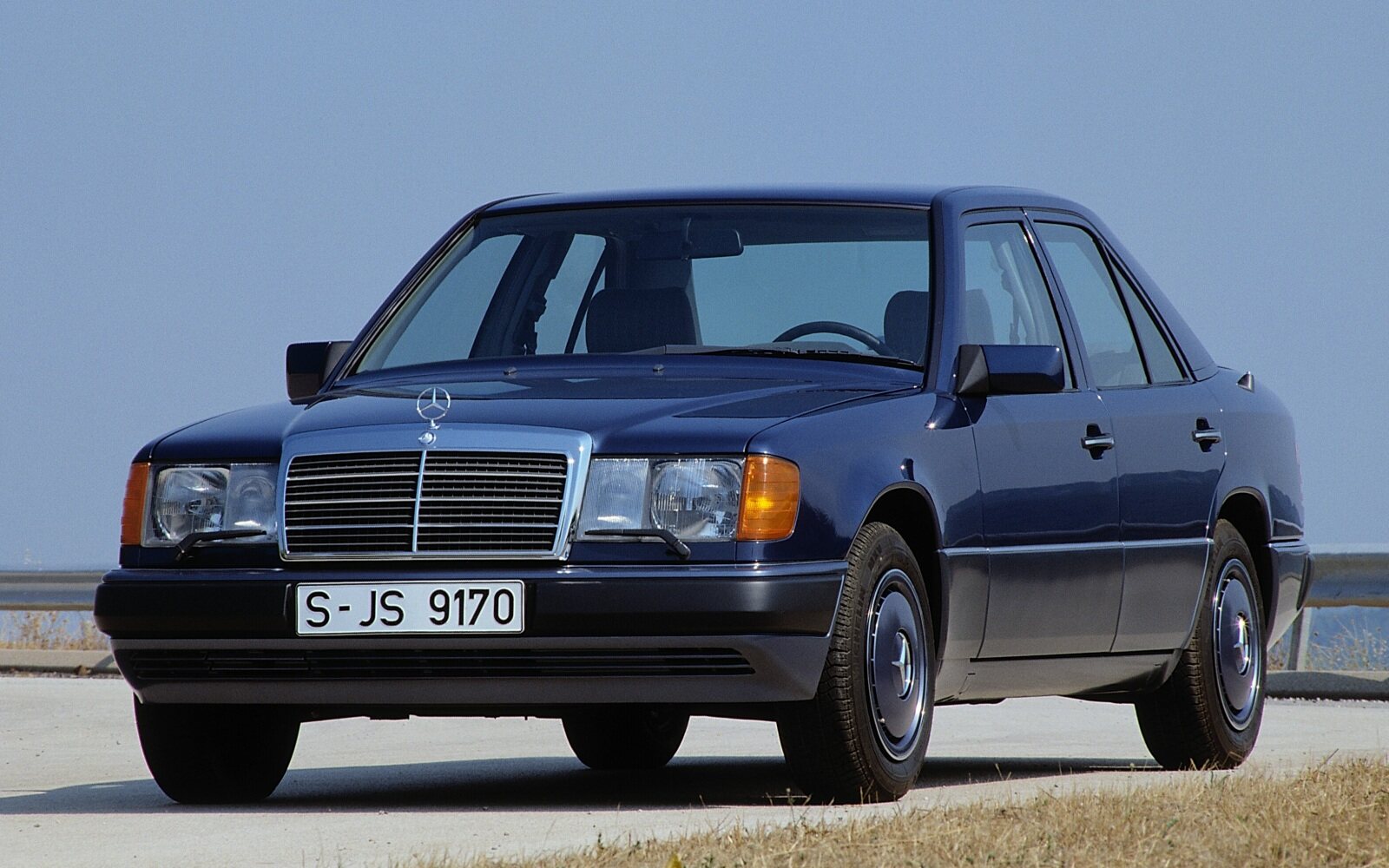 The IAA Motor Show in Frankfurt in September 1989 saw the unveiling of a completely revised model range in the medium class, the modifications consisting mainly of restyling to the body and a refit of the interiors. The most distinctive feature of the revised models was the side rub strips combined with integral side skirts, which had already been introduced in similar form two-and-a-half years earlier for the coupés. At the upper edges of the side skirts, narrow polished stainless steel trim strips were now additionally fitted and continued along the tops of the front and rear aprons, bringing back the long-absent (and much-missed) chrome finish in understated form. This effect was enhanced by chrome trim elements on the door handles and modified hub caps, on which the three-pointed star and a narrow trim ring on the circumference were also chrome-plated. Another new feature was the exterior mirror casings in the same colour as the vehicle. The interior was also given a makeover, with improved seats front and rear and various enhanced details.

As well as the above design and equipment enhancements, the revised 124 series model range unveiled at the IAA also included five completely new models. On show were a saloon, coupé and estate, now with a 220 hp 3.0-litre six-cylinder four-valve engine that was based on the proven two-valve engine and that had already made its debut six months previously in the 300 SL-24. Due to different installation conditions, it was not possible to give the 300 E-24, 300 CE-24 and 300 TE-24 the same catalytic converter cross-section that had been used in the SL. For this reason the rated output was 11 hp lower.

Alongside the new top-of-the-range models in the series, the fourth medium class body design to be presented in Frankfurt was a saloon with an extended wheelbase. After a gap of four years, the range now featured a long version again. The long body had been developed in close collaboration with the Binz company in Lorch, which also carried out the work on the bodyshell during series production. The wheelbase had been lengthened by 800 mm to 3600 mm and the overall length extended by the same amount. In contrast to their predecessors, the 250 D long and 260 E long models had six doors and a fully-fledged centre seat bench whose seat depth and backrest height were almost identical to those of the rear seat unit. Series production of the long-wheelbase saloons began in May 1990.

With the appearance of the 500 E at the Paris Motor Show in October 1990, a new top-of-the-range model in the 124 series was unveiled. Although at first glance similar to its sister models, the newcomer boasted a 326 hp 5.0-litre V8 four-valve engine based on the tried-and-tested 500 SL drive unit. And its performance was simply breathtaking. With four-speed automatic transmission fitted as standard and a top speed limited to 250 km/h, the 500 E managed 0-100 km/h in 5.9 seconds. The as-standard ASR acceleration skid control prevented the drive wheels from spinning even at full throttle. To improve emissions performance, the volume of the twin-pipe catalytic converter was increased from 3.9 to 5.8 litres. Secondary air injection and exhaust gas recirculation also helped. The 500 E was the first vehicle to use a new version of the V8 four valve unit, which differed from the version familiar from the SL thanks not just to a different fuel injection system but also due to its modified crankcase. In place of the mechanical-electronically controlled Bosch KE-Jetronic, the electronically controlled Bosch LH-Jetronic with air mass sensor was used for the first time. The changes to the engine block were more significant. It now had the same interior height as its little brother with a 4.2-litre capacity. As well as having a 16.5 mm lower installed height, the new standard-deck engine was also more economical to produce. Bore and stroke were retained unchanged, and the lower crankcase allowed for connecting rods with shorter shafts.

The characteristic features of the 500 E included subtly flared wings, fog lights integrated into the front apron and 16-inch alloy wheels with an eight-hole design and wide 225/55 ZR 16 tyres. The body was 23 mm lower than other models and to compensate for load-induced spring compression the rear axle was fitted with hydropneumatic level control as standard. Production of this exclusive model, which carried a price tag of almost 135,000 deutschmarks when it first appeared, involved close collaboration with Porsche. Bodyshell construction and final assembly were done at Porsche in Stuttgart-Zuffenhausen, while the Sindelfingen plant retained responsibility for the paintwork and delivery.

At the IAA Show in Frankfurt in September 1991, another medium class body variant was unveiled: the 300 CE-24 convertible. After a gap of exactly twenty years, a four-seat convertible was once again available.

A year later in September 1992, after the two millionth vehicle in the 124 series had rolled off the production line in June, a revised medium class model programme was presented. While the first facelift (in autumn 1989) focused on stylistic changes, this time the emphasis was on the engine and fittings. The petrol models featured a thoroughly revised engine range completely converted to four-valve technology. As part of the new M 111 engine series, two four-cylinder power plants with 2.0 and 2.2-litre capacity replaced the time-tested two-valve engine from the M 102 model family. The new engines were distinguished by increased output and higher torque over the entire engine speed range. At the same time, fuel consumption was down. Thanks to an increase in the volume of the catalytic converter, harmful emissions were also reduced. The successors to both of the two-valve six-cylinders and the 3.0-litre four-valve version were two new four-valve power plants with 2.8 and 3.2-litre capacity. These engines, like the old 3.0-litre four-valve unit, belonged to the M 104 series, but had a modified bore-to-stroke ratio. All four- and six-cylinder engines now had the same bore, which allowed for a more flexible and economical manufacturing process. The new 2.8-litre engine surpassed the proven two-valve engines of the M 103 model family in power and torque without consuming more fuel. In the 3.2-litre variant, which had already proved itself in the S-Class, the rated output was the same as that of the old 3.0-litre four-valve unit, but it was reached sooner, at 900 rpm. The maximum torque was significantly higher and was also reached at lower engine speeds. Despite the obvious improvements of the 3.2-litre power plant, the 3.0-litre version wasn't withdrawn entirely and remained in use for the 4MATIC models and the convertible.

At the same time as the medium class models were given a facelift, the new 400 E appeared, which had already been available for a year for export to the US and Japan and, once again, was created using the modular system. As the new top model among the volume cars, it featured the 4.2-litre V8 engine with four-valve design familiar from the S-Class and generated 278 hp. Performance didn't quite match the 500 E, but was still admirable. With four-speed automatic transmission fitted as standard, the 500 E managed 0-100 km/h in 6.8 seconds. Again, the top speed was electronically limited to 250 km/h. Externally, the only way to tell the 400 E apart from its cousins in the same class was to look at the model plate. Beneath its exterior, however, there were a number of differences. The body structure had been modified to accommodate the increased space required by the engine, and parts of the chassis and brake system were adopted from the SL models. With exhaust recirculation, secondary air injection and a large-capacity catalytic converter, the exhaust system was similar to that of the 500 E. Price-wise, the 400 E came into the 'special offer' category, at least when compared to the top-of-the range model. At its launch in October 1992, it was 50,000 deutschmarks cheaper than the 500 E. 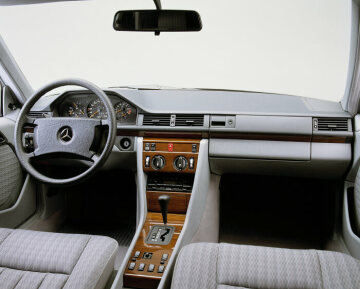 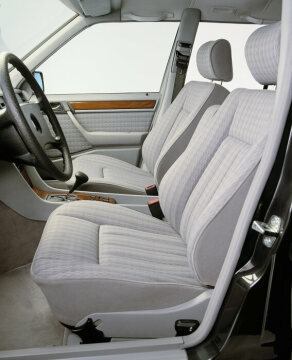 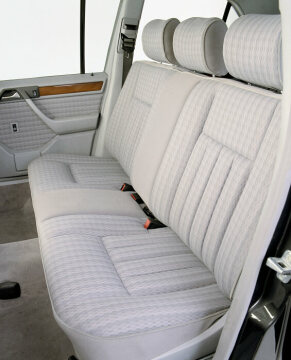 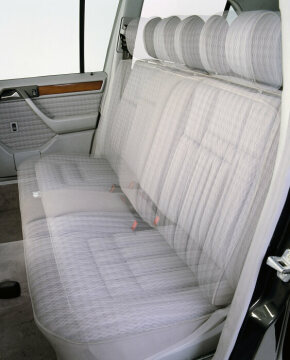 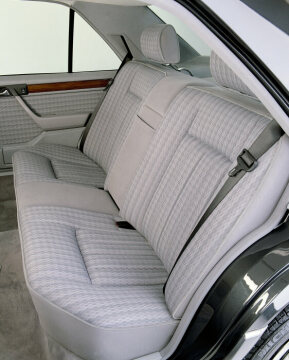 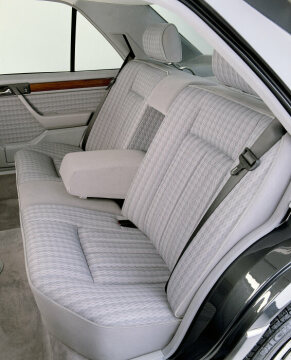 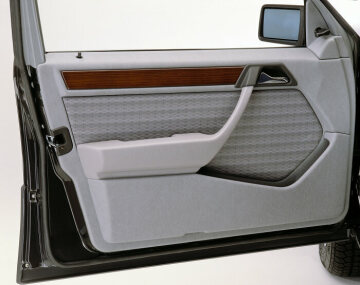 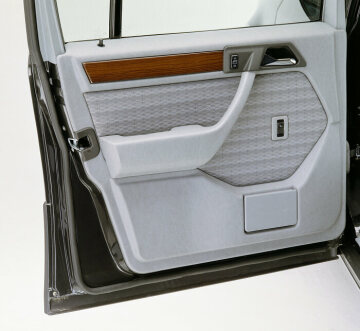 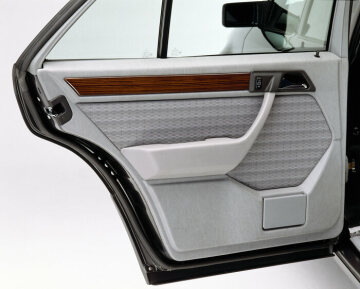 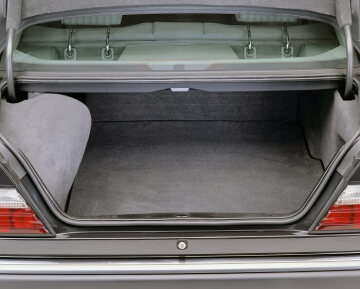 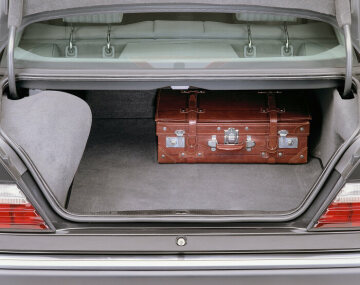 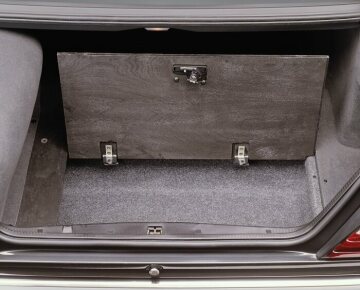 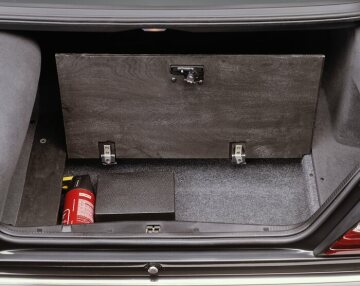 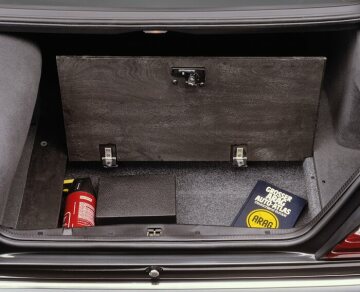 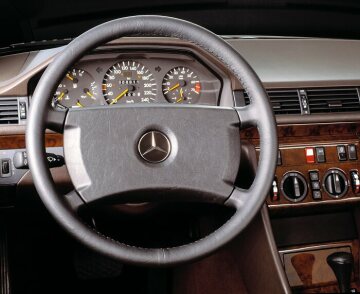 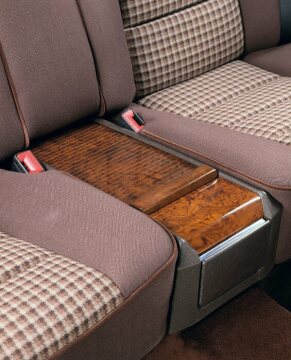 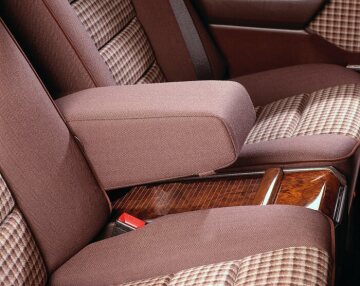 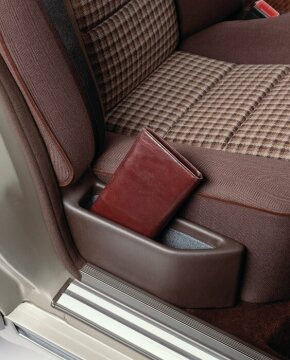 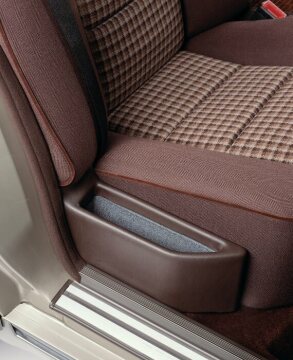