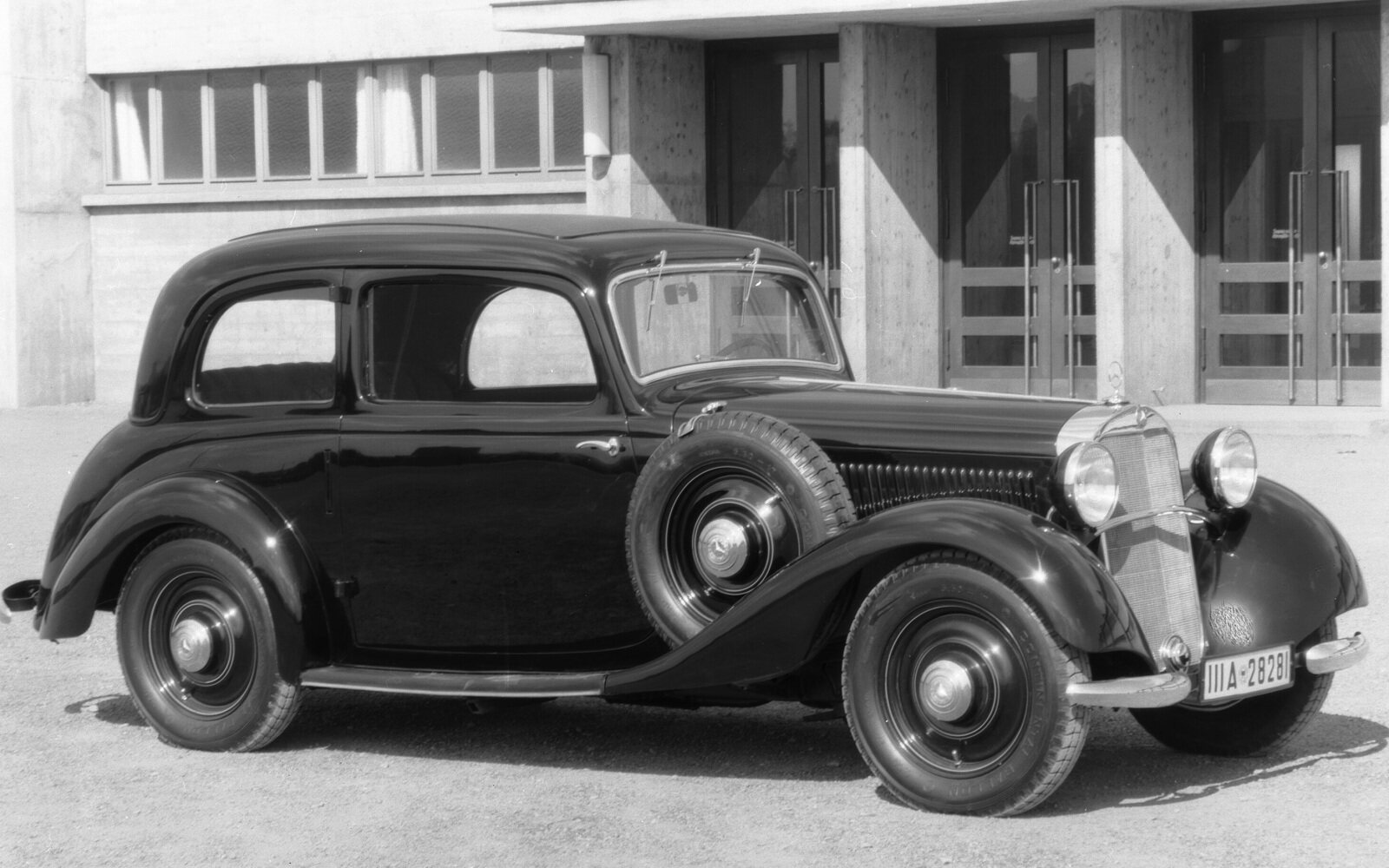 Just one and a half years after the launch of the Mercedes-Benz 170, whose swing-axle chassis proved both, innovative and successful, there followed the next stage in the renewal of the passenger car range. The International Motor and Motorcycle Show in Berlin in February 1933 was the venue for the launch of no fewer than three new models: the 200 (W 21), 290 (W 18) and 380 (W 22). The 200 (W 21) was nothing other than a more powerful and slightly more spacious version of the 170. A 5 mm wider bore gave the engine a displacement of two litres with a power output of 40 hp - 8 hp more than in the 170. The wheelbase on the 200 was 100 mm longer than that of its smaller brother. The technical concept in addition to the choice and design of bodies was more or less the same as for the 170. The 200 replaced the Stuttgart 200, which, with its rigid-axle chassis, was no longer up with the times. However, with its dainty looks the low-slung swing-axle car lacked the prestigious appearance of its predecessor.

In 1933, the choice of bodies was still modest. It consisted of the four-door saloon with built-on trunk, which was optionally available with a retractable roof ex factory, the Convertible C and a two-seater special roadster. With its relatively angular lines and squat radiator, the styling still came across as very stiff.

In time for its second model year, which began in February 1934, the 200 underwent a significant upgrade. The squat radiator made way for the stylistically more pleasing, subtly wedge-shaped variant that had for decades been the face of normal Mercedes-Benz passenger cars. The choice of bodies was extended. Alongside the Convertible A, the line-up was augmented by two four-seater tourers: a two-door version with third-party coachwork and a four-door version with a body made in Sindelfingen. Roadster and Convertible A came with a 2600 mm wheelbase, which was the same as for the 170 (W 15) and which was 100 mm shorter than in the four-seater variants. A price tag of RM 7 800 made the Convertible A the most expensive variant of the 200.

The addition of a longer version with a 3050 mm wheelbase proved to be a wise move. The same wheelbase provided the basis for generously sized saloons up until the advent of the 300 in 1951. The longer wheelbase was used for the four-seater Convertible B as well as three six-seater body variants: in addition to a pullman saloon and pullman landaulet, there was an open tourer which, initially available with third-party coachwork, could be ordered with a body made in Sindelfingen from June 1934 onwards. As the space inside the pullman saloon made it especially suitable for use as a taxi, this vehicle served as a basis for developing a special taxicab version.

In February 1935, a year after the launch of the long-wheelbase version, the sales prices of both chassis types and most body variants were lowered. In addition, the range of bodies was augmented by three new long-wheelbase variants. A four-/five-seater four-door saloon was aimed at addressing numerous customers' growing need for space. Potential clients of an avant-garde persuasion were the target group for a saloon with streamlined body featuring progressive styling allied to superior quality. The cost of this, however, was an extra RM 3 700. The price was even more elevated when it came to the equally new "Special Convertible A", which, at RM 11,500, became by far the most expensive variant of the W 21, it being possible to buy two four-/five‑seater saloons of the two‑litre swing-axle version for the same price.

February 1935 brought with it a significantly extended choice for those customers who, while wishing to drive a saloon, did not want to forego the advantages of a roof that could be opened. The standard-wheelbase saloon was optionally available not only with a retractable roof made in Sindelfingen, but alternatively with a sliding roof manufactured by Happich. The long-wheelbase saloon could be ordered at extra cost with a sliding roof from Happich or Webasto, while the pullman saloon was optionally available with a standard or special-version Webasto sliding roof.

Further modifications for the 1935 model year included larger dials in the instrument panel, a stiffer front end with metal bulkhead against body vibration and a reinforced frame. In April 1935, the option to order the saloon with a retractable roof made in Sindelfingen was discontinued. Instead, as an alternative to the Happich sliding roof, it was possible to order one made by Webasto.

For the 1936 model year, three new body variants were unveiled in February. The first was a standard-wheelbase two-door saloon that was significantly more modern in appearance than its four-door counterpart, which had been in production for two years. While being based stylistically on the similar variant of the 170 launched in February 1934, it was more harmonious to the eye than its small brother thanks to its longer wheelbase. If desired, it could be ordered with a sliding roof, this time from Golde. At the same time, the sliding roof optionally available for the long-wheelbase saloon was now from Golde.

Simultaneously with the two-door saloon, the sales programme was extended by a new version of the Convertible C. Its styling based on the two-door saloon, this variant, like the saloon, had the spare wheels mounted at the sides in the wings. There were also changes to the choice of bodies on the long wheelbase: the saloon with streamlined body was dropped, while a four-/five‑seater Convertible D was added. On all variants of the 200, the functional and rugged bumpers were replaced with a more understated, almost graceful variant identical to that on the 170 V.

In view of the spacious though heavy bodies that had been made possible since 1934 by the longer chassis, the 40 hp two‑litre engine in the W 21 could not really be expected to deliver stunning performance. This called for measures to raise the power output so as to meet growing customer demand.

The solution for the 200 was to increase the engine displacement. The desired increase in displacement to 2.3 litres could not be achieved simply by widening the cylinder bore. Although the bore was widened from 70 to 72.5 mm, it was additionally necessary to lengthen the stroke by 5 to 90 mm, something that necessitated a new crankshaft. The 2.3‑litre engine, with the design code M 143, produced 55 hp, 15 hp more than the M 21, and was fitted in the long chassis from May 1936. However, the model designation "200 with long chassis" was initially retained, the 55‑hp engine being included in the May 1936 price list as an optional extra costing an additional RM 175. Even today, this fact still causes a certain degree of confusion, since although both versions are identical in terms of chassis and body, they carry the design code W 21 or W 143, depending on which engine is installed.

It was September 1936 before clarity was restored, the 2.3‑litre version being given its due designation "230". The standard and long versions of the two-litre model continued to be available, albeit RM 500 cheaper, while the exclusive Convertible A with long-wheelbase chassis was reduced in price by as much as RM 2 500.

Manufacture of the long-version W 21 was finally phased out in July 1936, two months after the start of production of the W 143. The in-house price list of February 1937 included the "Model 200 with long chassis" as a discontinued model, while the standard-wheelbase version, which was no longer built after December 1936, was still listed as a normally available model.

The standard-wheelbase W 21 was produced only in Untertürkheim, where it reached a unit volume of 9,281 vehicles. The long version totalled 6 341 units, with 2 950 being produced in Untertürkheim and 3,391 in Mannheim.