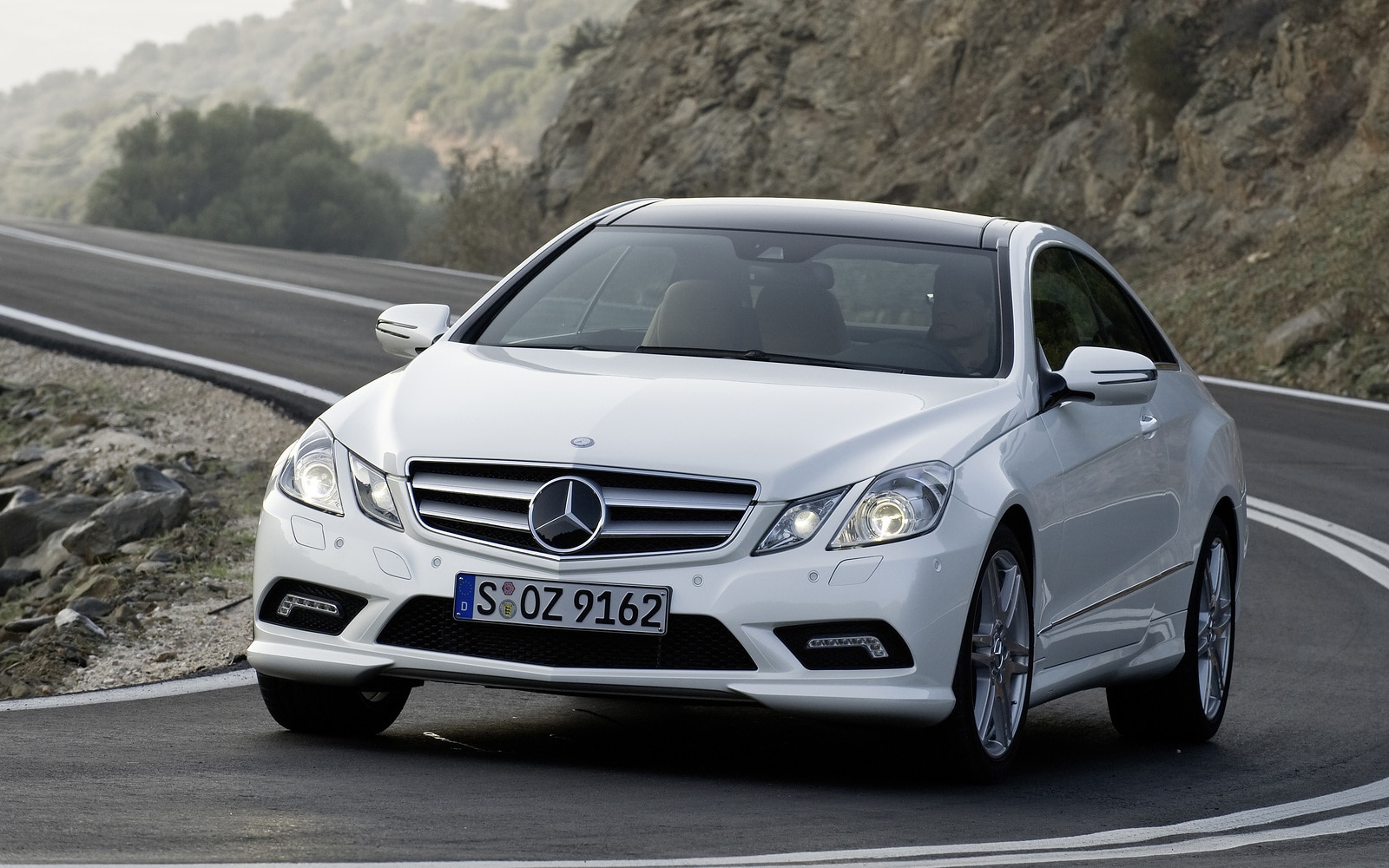 Only three months after the presentation of the new E-Class Saloon, the new E-Class Coupé was presented to the public for the first time at the Geneva Motor Show in March 2009. Like the four-door models, the sporty-luxurious two-door featured not only a striking design, but at the same time a wealth of technical innovations in the areas of the engine, suspension control, safety systems and infotainment.

The exterior appearance of the new E-Class Coupé reflected traditional style features such as the fully lowerable side windows and the typical sports radiator grille with large central star. At the same time, the front of the vehicle and the rear wings made reference to the lines of the Saloon, creating a recognisable family resemblance.

In the interior, whose essential design elements reflected the design idiom familiar from the Saloon, but interpreted in a sportier way, the significantly increased space was striking. The new Coupé, which was based on the E-Class instead of on the C-Class - as had been the case with its predecessor, the CLK - offered improved space in terms of length and width. Newly developed seats with electric adjustment were fitted as standard, and their easy-entry function made it possible to reach the individual rear seats with ease. Their backrests, in turn, could be folded down individually or together, thus increasing the load volume of the luggage compartment.

At market launch in May 2009, the new E-Class Coupé was available with five different drive units: two diesel and three petrol engines. The 2143 cc four-cylinder engine used in the E 250 CDI BlueEFFICIENCY Coupé came from the new OM 651 diesel engine generation and delivered 150 kW/204 hp and a maximum torque of 500 Nm. Its average combined fuel consumption, according to the applicable NEDC measurement standard, was a maximum of 5.6 l/100 km. The 3.0-litre V6 from the OM 642 series with common-rail direct injection and turbocharging remained the top-of-the-range engine among the compression-ignition models. In the E 350 CDI BlueEFFICIENCY Coupé, it was initially configured to 170 kW/231 hp and had a combined average consumption of 6.8 l/100 km in the NEDC.

The range of petrol engines started with the newly developed four-cylinder M 271 in the E 250 CGI BlueEFFICIENCY Coupé. The peak power of the 1.8 litre turbocharged direct-injection engine of 150 kW/204 hp, combined with a standard 5-speed automatic transmission, provided sports car-like performance with a modest fuel consumption of just over 7 l/100 km. The mid-range power segment was covered by the 3.5-litre V6 from the M 272 series in the E 350 CGI BlueEFFICIENCY Coupé. It featured spray-guided direct petrol injection of the latest design. The power output of the naturally aspirated engine of 215 kW/292 hp came with an average standard fuel consumption of just 8.5 l/100 km. As in the CLK-Class, the V8 with a displacement of just under 5.5 litres and 285 kW/388 hp used in the E 500 Coupé ensured particularly superior power delivery and maximum smooth-running.

On the chassis side, the new E-Class Coupé exploited the available dynamic handling potential in a safe and sporty-comfortable manner at all times. The AGILITY CONTROL suspension with automatic shock absorber system was fitted as standard. It automatically adapted to the prevailing driving conditions and ranged from sportily agile to comfort-oriented. An AGILITY CONTROL sports suspension was available as an option, which featured damping characteristics with a sporty focus and was complemented by a speed-sensitive sports steering system with a more direct ratio. Further refinement was offered by a Driving Dynamics Package, also available as special equipment, with electronically controlled, wheel-selective damping system and the two selectable driving modes "Comfort" and "Sport".

As is always the case with Mercedes-Benz, extensive safety and assistance systems were also used in the new E-Class Coupés to significantly increase the safety margin for all passengers and to take the strain off the driver in the best possible way. The Coupé benefited from the far-reaching new developments for the E-Class Saloon that had been launched just a short time  before. Standard equipment included the ATTENTION ASSIST drowsiness detection system and PRE-SAFE® preventive occupant protection. The Intelligent Light System, which optimised road illumination in all traffic situations with the aid of Adaptive Highbeam Assist and based on bi-xenon headlamps, was also available as special equipment for the E-Class Coupé. Also available as an option was the DISTRONIC PLUS assistance system, already familiar from the Mercedes-Benz S-Class, with adaptive cruise control, Brake Assist Plus and PRE-SAFE® Brake. It intervened - autonomously if necessary - in the driving situation in order to prevent or at least reduce the severity of a collision with an obstacle ahead.

The passive safety equipment of the E-Class Coupés set a new standard in the segment with seven airbags, seat belt tensioners, belt force limiters on all seats and crash-active head restraints on both front seats. Increased use of ultra-high-strength steel alloys and sophisticated deformation structures ensured that the body could withstand even high impact loads and thus offered the passengers the best possible protection. The Mercedes-Benz developers also focused on protecting other road users. For example, the new E-Class Coupés were equipped with an active bonnet whose rear end lifted by 50 mm in the event of an accident with the aid of a spring system, thus increasing the deformation space for pedestrians or cyclists.

The infotainment equipment represented the state of the art. At the centre of the operating concept already proven in the S-Class, with multifunction steering wheel, colour display in the instrument panel and Direct Select buttons, was the controller positioned on the transmission tunnel. This controlled, for example, all audio functions, telephone and navigation. Standard equipment included the Audio 20 system, consisting of a radio, CD/DVD player, eight speakers and Bluetooth interface. The COMAND APS multimedia system was available as an option, featuring hard-disc navigation, DVD changer, extensive music register and voice control. The acoustic experience was further intensified by a 500-watt sound system, a media interface and a tuner for digital radio reception.

Even at the time of the market launch of the new E-Class Coupé, the range of available engines, chassis variants, equipment lines, colours and wheel/tyre combinations offered extensive possibilities for individualisation. The optionally available AMG Sports Package with front apron, side sill panels and rear apron in AMG outfit set a decidedly sporty accent here. Also included were 18-inch AMG light-alloy wheels with 235/40 R 18 tyres at the front and 255/35 R 18 tyres at the rear, as well as the AGILITY CONTROL sports suspension. The interior trim in black ARTICO man-made leather and the AMG sports steering wheel in 3-spoke design created an appropriate interior ambience.

To mark the start of production, Mercedes-Benz launched a limited "Prime Edition" of the E-Class Coupé, which featured particularly exclusive equipment details. The scope included, among other things, the special palladium silver metallic paint finish, a panoramic glass roof and titanium grey, 18-inch AMG light-alloy wheels. Among other things, a two-tone designo interior in nappa leather gave the interior a special flair. The equipment package was available for the E 350 CGI, E 350 CDI and E 500 models.

March 2010 saw the first expansion of the available engine range. Parallel to the launch of the new E-Class Cabriolets, the E 220 CDI BlueEFFICIENCY and E 200 CGI BlueEFFICIENCY models now rounded off the lower end of the range. The OM 651 four-cylinder diesel with a displacement of just under 2.2 litres was specified at 125 kW/170 hp, and the 1.8-litre petrol direct-injection engine at 135 kW/184 hp. A good year later, in April 2011, the introduction of the E 300 BlueEFFICIENCY started, initiating the changeover from the previous V6 of the M 272 petrol-engine series to the newly developed M 276 for the two-door E-Class models. The six-cylinder now had a cylinder bank angle of 60° instead of 90°, as had been the case with its predecessor. In the E 300 BlueEFFICIENCY, which narrowed the gap between four-cylinder and six-cylinder engines, the new V6 direct-injection engine - with an identical displacement of 3498 cc - produced 185 kW/252 hp. In addition, the new seven-speed 7G-TRONIC PLUS automatic transmission was used, which from now on was also successively installed in the other E-Class Coupés as standard or as special equipment. The additional designation CGI, which referred to direct injection, was also dropped from the corresponding petrol engines from this time on.

In parallel to the 300 Coupé, the 350 version also benefited from the new engine. Here it produced 225 kW/306 hp, offering fuel consumption benefits in the region of 20% over the previous generation of engines. The diesel-powered top version E 350 CDI BlueEFFICIENCY also benefited from a performance upgrade at this time: Instead of 170 kW/231 hp as before, the 3.0-litre OM 642 V6 now delivered 195 kW/265 hp and yet still consumed around 10% less fuel, with a maximum of 6.2 litres per 100 km for the combined average in accordance with the applicable measuring standard.

The comprehensive activities to reduce consumption and thus also CO₂ levels similarly extended to the top-of-the-range E 500 model. In the run-up to the Frankfurt Motor Show 2011, both the Coupé and the Cabriolet were given the additional designation BlueEFFICIENCY for the first time and were also equipped with a direct-injection V8 from the M 278 series. The engine, which had been used for the first time the year before in the S-Class (model series 221) and the CL Coupé (model series 216), was characterised, among other things, by a reduced displacement of 4663 cc and the use of two exhaust gas turbochargers. This resulted in an increase in output to 300 kW/408 hp in both E-Class two-door models, combined with a further 20 percent reduction in fuel consumption compared to the previous engine, which had a displacement of just under 5.5 litres.

There was little movement in the gross list prices until the first far-reaching facelift of the two-door E-Class in March 2013: the range started at 41,441.75 euros for the petrol-powered E 200 BlueEFFICIENCY Coupé; only the E 500 BlueEFFICIENCY, which had been fundamentally updated on the drive side, was invoiced at almost 7% more and cost 70.061,25 euros

In terms of the number of units produced up to the model update, the E 250 CGI BlueEFFICIENCY Coupé (offered from April 2011 under the designation E 250 BlueEFFICIENCY Coupé) proved to be by far the most popular model. Almost 29,800 units of the two-door model, powered by a four-cylinder direct-injection petrol engine, had been built by April 2013. By contrast, hardly more than 450 vehicles of the E 300 BlueEFFICIENCY Coupé, which was added to the range in 2011, came off the production lines in the same period. In total, the production output for the aforementioned period amounted to over 141,300 E-Class Coupés. 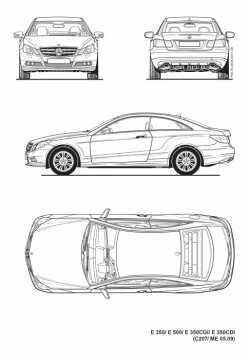 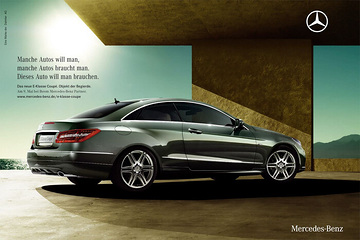 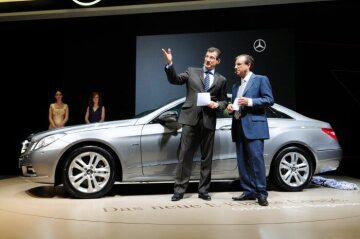 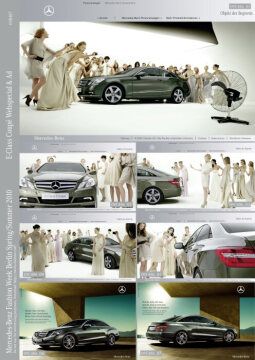 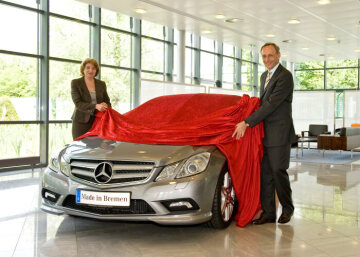 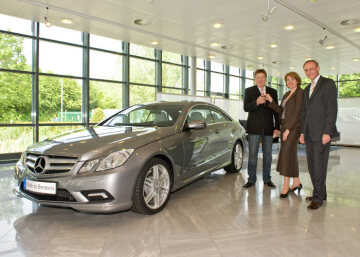 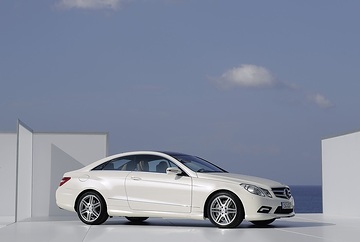 00146273
MercedesSport for elegance and sportiness