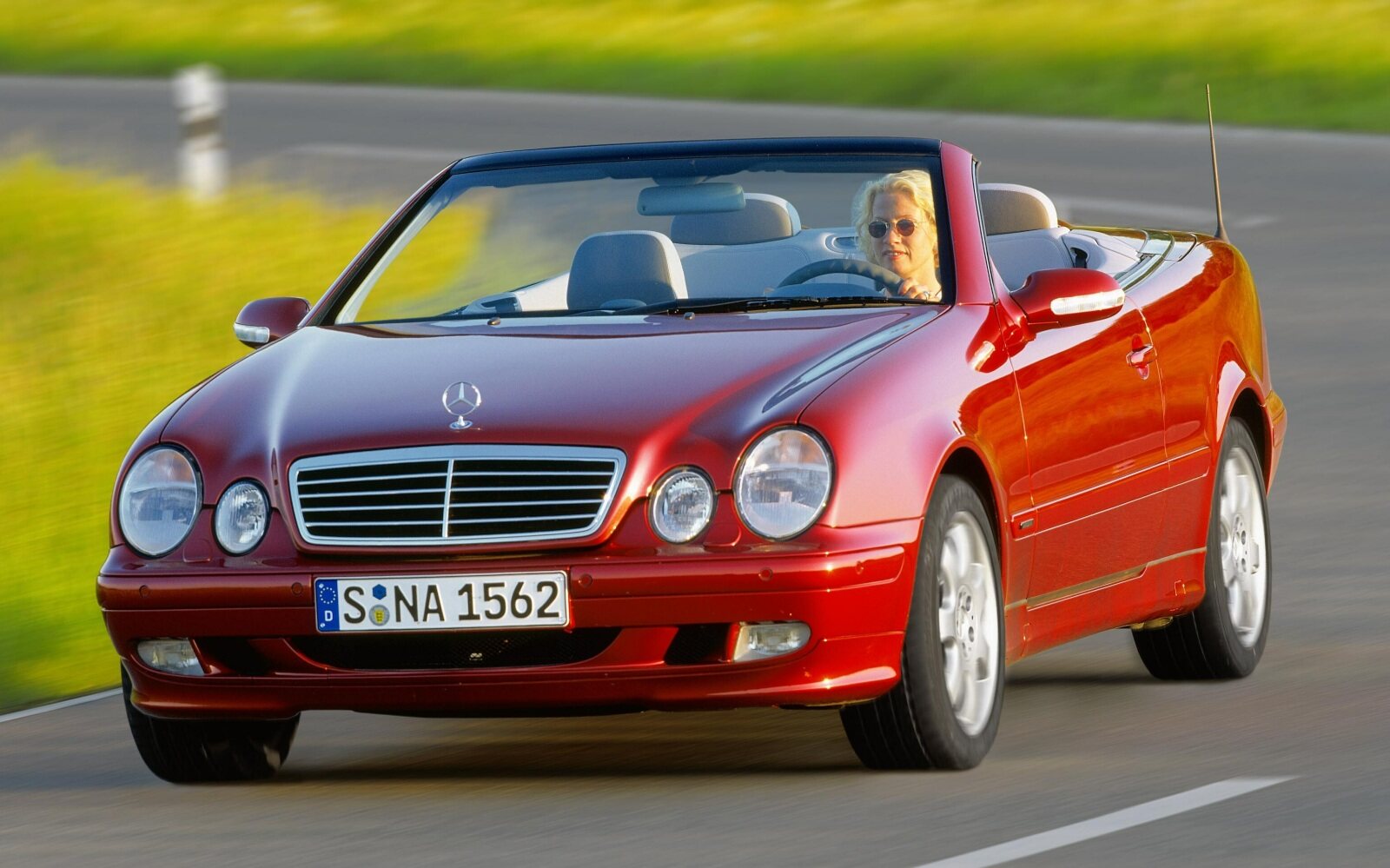 In August 1999 the successful Mercedes‑Benz CLK coupés and convertibles began the 2000 model year with an even greater range of standard equipment and with new and innovative technology. The facelift yielded the state-of-the-art 4.3‑litre V8 engine, for example. As of mid-August 1999 it was also available for the CLK Convertible (A 208 model series) and emphasised the sporty-elegant character of the fascinating open-air car with particular clarity. The engine outputted 205 kW (279 hp) and accelerated the open-top four-seater from 0 to 100 km/h in 7.4 seconds. Between 3000 and 4400 rpm the engine provided a maximum torque of 400 newton metres, allowing the CLK 430 Convertible to unfold its full tractive power already at low engine speeds, and made fast interim sprints possible. Despite these dynamics the new model variant consumed only 12.2 litres of premium petrol per 100 kilometres (NEDC overall consumption).

The standard equipment of the V8 Convertible included, among other items, a five-speed automatic transmission, automatic climate control, wide-base tyres of size 225/45 WR 17 on 17-inch light-alloy rims, memory switch for the power front seats and exterior mirrors as well as an electrically variable steering column. Powerful vented disc brakes 330 millimetres in diameter at the front axle and 300 millimetres at the rear axle as well as a modified suspension rounded off the technical equipment.

For the production start of the new CLK 430 Convertible the design, technology and equipment of the entire CLK model series were significantly upgraded. The Coupé and Convertible received the same technical innovations that had also offered greater driving safety and ride comfort in the E-Class of model year 2000. Altogether the designers and engineers upgraded around 800 components of the CLK (model series C ) - more than 200 of these modifications being directly visible.

The expanded standard equipment included newly designed bumper aprons in the front and rear, side skirts and rub strips in vehicle colour, exterior mirror housings with integrated indicator repeaters, vertical and horizontal electric adjustment of the front seats, seat belts in front with automatic comfort-fit feature, a central display in the instrument cluster, a multifunction steering wheel for operating the audio units and telephone, exit lamps in the doors, the 'Audio 10' RDS car radio, the ESP®  Electronic Stability Program, cruise control and SPEEDTRONIC. And now the Convertible too received remote door unlocking of the boot lid. This upgrade of the standard equipment continued Mercedes‑Benz's persistent value-for-money strategy with the CLK as well. The benefit to the customer came to about DM 2500.

For CLK models two individual design and equipment lines continued to be available. The previous 'Sport' line was replaced by the more exclusive 'Avantgarde' line, distinguished by 16‑inch light-alloy rims with a seven-spoke design, door handles in vehicle colour, blue-tinted glass, bird's-eye maple wood trim and grey-coloured dials in the instrument cluster, among other features. For the interior equipment, three colour combinations were available with this model variant.

The list of optional extras also included innovative new developments from the E-Class and S-Class. At its head stood the COMAND operating and display system, combining car radio, navigation system and CD player. Instructions from the electronic traffic pilot appeared in the form of a map on a colour display in the centre console and as icons on the central display in the instrument cluster.

The model refinement also added the CLK 55 AMG Convertible as a new vehicle type to the model line. As already in the corresponding CLK Coupé, the powerful Mercedes-AMG V8 engine with 5.5-litres displacement, 255 kW (347 hp) of power and a torque of 510 newton metres ensured tremendous driving pleasure. The open-top four-seater accelerated from 0 to 100 km/h in 6.2 seconds; top speed was electronically limited to 250 km/h. The suspension, adapted as on the Coupé to the impressive power and performance data, ensured high driving safety and dynamics as did the resilient braking system.

In June 2000 the four-cylinder models of the CLK with modified engines and standard six-speed manual transmissions arrived at the branches and sales partners of the Mercedes‑Benz brand. The V6/V8 models CLK 320 and CLK 430 remained unchanged.

The CLK 200 KOMPRESSOR introduced a new 2.0‑litre engine mechanical supercharger, already familiar from the SLK and the new C-Class. The engine generated 120 kW (163 hp) and was distinguished by exemplary elasticity thanks to a powerful torque of 230 newton metres from 2500 rpm. The new entry-level version of the CLK Convertible accelerated from 0 to 100 km/h in 9.9 seconds; top speed was electronically limited to 218 km/h.

Even better driving performance was afforded by the CLK 230 KOMPRESSOR with its modified 2.3‑l itre engine that generated 145 kW (197 hp) and from 2500 rpm a maximum torque of 280 newton metres. For the acceleration from 0 to 100 km/h the convertible needed 8.6 seconds. Top speed was 230 km/h.

The two four-cylinder engines were further developed with an eye to future emission and noise limits and had over 150 of their components optimised. They included the cylinder heads, now distinguished by flow-optimised intake and exhaust ports with oval cross-sections for better cylinder charging. The same purpose was served by a new, more compact combustion chamber design, which additionally reduced heat loss and thereby improved the response characteristics of the catalytic converter.

The camshafts of the four-cylinder engines were fitted with special Hall sensors, which determined the position of the piston in the first cylinder for better actuation of the corresponding injection valves during a cold start. The result was significantly improved starting characteristics of the cold engine. Also new was the electric radiator fan that supplied the engine with cooling air and could be controlled in the interest of low fuel consumption and low noise emission. The air flow components and the intake manifold were modified for acoustic comfort, while a cover over the intake manifold additionally lowered noise emissions.

The exhaust system of the CLK 200 KOMPRESSOR and of the CLK 230 KOMPRESSOR consisted of a double-walled exhaust manifold with air-gap insulation and an efficient catalytic converter underneath the vehicle floor. The special design of the manifold reduced heat loss between the engine and the catalytic converter after cold-starting, so that the emission control system could begin converting pollutants faster. The higher precious-metal content in the catalytic converter layer and the catalytic converter capacity increased to 3.2 litres were other preconditions for complying with the strict EU 4 limits. All components of the engine and the exhaust system, whose proper functioning is required for the low exhaust emission levels, were electronically monitored by means of a so-called 'on-board diagnosis'. 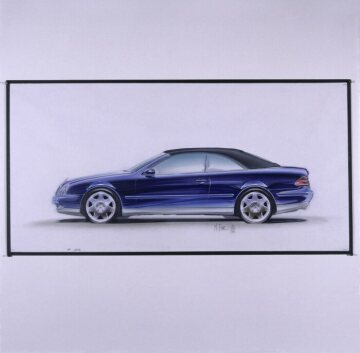