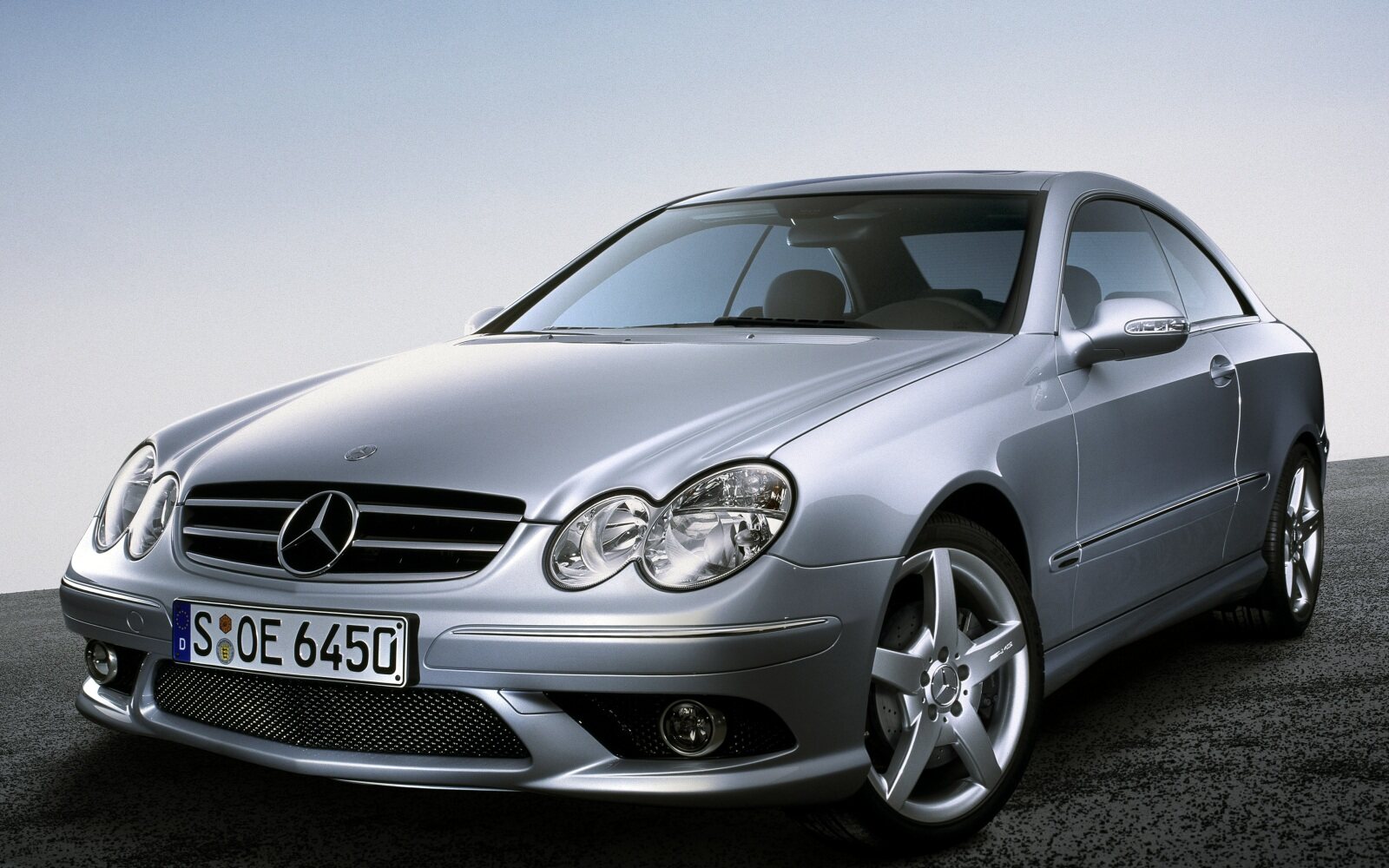 In spring 2002 Mercedes‑Benz continued its long-standing coupé tradition with a stylistically fascinating and technically sophisticated automobile. The new CLK-Class of the 209 model series was presented at the Geneva Motor Show.

The new CLK Coupé represented an independent model series in the passenger car range from Mercedes‑Benz and underscored this role through a design newly developed down to the last detail: Distinctive stylistic elements like the continuous band of frameless, fully retractable side windows, the louvre-radiator grille typical of the brand with centrally located Mercedes star, the re-interpreted twin-headlamp face and the boldly designed convertible roof shaped the confident character of this 4.64-metre-long CLK-Class.

A newly developed suspension, powerful engines and technically sophisticated, top-of-the-line optional extras from Mercedes‑Benz afforded a driving experience unique in this vehicle category. Seven engines, three transmission variants, two design and equipment lines as well as numerous colour combinations were available for selection. Six of altogether seven engines with a performance range of 120 kW (163 hp) to 270 kW (367 hp) were either new or further developments distinguished by an added power of up to 20 kW (27 hp) and by up to 15 per cent greater torque. At the same time, the fuel consumption of the CLK models was on the average 6 per cent less compared with the predecessor.

In the new CGI engine, Mercedes-Benz supplemented the TWINPULSE system with trend-setting petrol direct injection, which lowered fuel consumption to just 7.9 litres per 100 kilometres (NEDC overall consumption). That was around 16 per cent less than in the predecessor. The CLK 200 KOMPRESSOR consumed 8.6 litres per 100 kilometres and was about 8.5 per cent more economical than previously.

A newcomer to this coupé class was the powerful CLK 270 CDI diesel model, under whose bonnet the state-of-the-art five-cylinder diesel engine operated with common-rail injection. It generated 125 kW (170 hp) and with a fuel consumption of only 6.7 litres per 100 kilometres it qualified as among the most economical engines of its category.

At the top of the new CLK line were two V8 models with the driving performance of typical sports cars: the CLK 500 (225 kW/306 hp) and the CLK 55 AMG, whose further developed engine yielded an impressive top output of 270 kW (367 hp). Thanks to these powerful engines, the new CLK Coupé accelerated from 0 to 100 km/h in only 6.0 and 5.2 seconds, respectively.

The body of the CLK 55 AMG top model was lower by 25 millimetres, and the sports suspension provided a firmer spring-damper setting, reinforced stabiliser bars and modified springs. Four vented disc brakes with two-piston floating brake callipers at the front axle as well as the fixed brake callipers adopted from the SL 600 at the rear axle guaranteed optimal deceleration. AMG light-alloy rims and 17-inch tyres boosted the sporty appearance and contributed to the good roadholding of the coupé. On the front axle were mounted 7.5-inch-wide wheels with tyres of size 225/45 ZR 17; at the rear 8.5-inch-wide wheels with tyres of size 245/40 ZR 17 afforded perfect traction and a sporty look. The AMG Bodystyling package consisted of a front apron with integrated front fog lamps, dynamically shaped side sills and a special rear apron. The CLK 55 AMG was distinguished by another special technical feature for a sporty driving experience: a five-speed automatic transmission with steering-wheel operation and SPEEDSHIFT. As in the top sports car SL 55 AMG, the driver could also change gear ranges à la Formula 1 by means of two buttons located on the back of the two upper steering-wheel spokes.

Mercedes‑Benz further contributed to experience-oriented, dynamic driving with the four, six and eight-cylinder models of the CLK-Class through a newly developed technology that detected the given type of driver and consequently adapted the drive characteristics of the engine. When a sporty-minded driver sat behind the wheel, the electronics made the two-door car respond spontaneously to motions of the accelerator in line with the driver's personal expectations - the throttle valve opened wider than usual given the same pedal travel. If, on the other hand, the computer identified a more comfort-minded driver, it changed the control characteristic of the electronics so that the engine harmoniously adjusted to this driving behaviour: given the same pedal travel, the throttle valve opened more slowly and the coupé accelerated more gently.

In the body design, Mercedes-Benz engineers achieved further progress especially regarding safety and aerodynamics. They improved the torsional stiffness of the body by 40 per cent and practically doubled the share of high-strength steel alloys, which guaranteed maximum strength at low weight. The drag coefficient of the new CLK Coupé was only 0.28 and marked a new best performance in this vehicle category. In addition, significantly reduced negative lift at the front and rear axles served as the precondition for maximum driving safety and driving stability. Exchangeable front and rear modules with integrated impact protection absorbed the energy in collisions with an impact velocity of up to about 15 km/h, so that the underlying support structures remained undamaged. Also noteworthy here: threaded connections allowed low-cost replacement of the front and rear modules; straightening, welding and painting were no longer necessary.

Mercedes‑Benz engineers invested a lot of work into newly or further developing the axles, steering and brakes in order to exceed the high standards of the predecessor yet further: in lieu of the previous double wishbone design came a state-of-the-art triple-link front axle with McPherson suspension struts, allowing significant progress especially regarding wheel control, comfort and steering precision. The previous recirculating ball steering was replaced by power-assisted rack-and-pinion steering, whose more direct response characteristics better suited the dynamic character of the new coupé.

Standard in the coupé were the latest occupant protection systems: adaptive airbags for the driver and front passenger, side airbags and window airbags as well as belt tensioners and belt-force limiters at all seats. For the first time, the front passenger's weight was also considered for deployment of the two-stage passenger airbag appropriate to the given situation. In this way the CLK-Class came to embody a practical safety concept while also passing the strictest crash tests.

Stretched to 4.64 metres, the CLK Coupé was 71 millimetres longer, 18 millimetres wider and 42 millimetres higher than its predecessor. The wheelbase grew to 2715 millimetres, an increase of by 25 millimetres. These larger dimensions afforded the occupants even more space and comfort. In terms of space between seats, headroom, knee room, elbow room and shoulder width, the interior had increased in size.

Soft shapes, high-quality materials, attractive colours and a design with much love of detail created an atmosphere in the interior of the Coupé that made you feel well at once. The instrument panel, centre console, door trim and seats were new developments that also emphasised the independent character of the CLK-Class. Individualised seating comfort was afforded by the optional multicontour seat, fitted along the longitudinal and transverse contours with four individually inflatable air cushions that could be exactly adjusted to the driver's physique. For example, besides the continuously variable lumbar and lateral support, the thigh support could be adjusted separately. These innovations belonged to the standard equipment of the sport seats in the CLK 55 AMG. The controls were within easy reach; cockpit instruments in the classical round design provided clear information on vehicle speed, engine speed and the time of day; fine details like the chrome rings on the instruments or the large trim elements of fine wood and structured aluminium in the centre console underscored the high value appeal of the interior. Automatically operating systems relieved the driver and offered the utmost convenience.

In the rear the standard asymmetrically split backrests and seat cushions could be folded forward either individually or together, allowing the CLK passengers to vary the loading capacity of the coupé as they pleased. Folding the rear seats forward created a practically level cargo area in the rear. The luggage compartment had a capacity of 435 litres (VDA measuring method), a 15-litre increase compared with its predecessor.

Even more comprehensive than its predecessor's, the standard equipment of the CLK-Class embodied an added value of more than EUR 2800. Besides window airbags, automatic belt extenders, power windows in the rear, Headlamp Assist, rain sensor, mixed tyres and adjustable steering column, the equipment also included efficient automatic climate control operating on the basis of current sensor data on the inside and outside temperatures as well as on the air humidity. Optionally available was the even more comfortable THERMOTRONIC with additional sun and pollutant sensors, rear blower and activated charcoal filter. It was standard on the V8 CLK 500 and CLK 55 AMG models.

In addition, for the first time top-of-the-line, trend-setting high-tech systems from Mercedes-Benz entered the CLK-Class: DISTRONIC adaptive cruise control, KEYLESS GO access and drive authorisation, bi-xenon headlamps and LINGUATRONIC voice control for telephone and car radio. The combination of mobile telecommunications with efficient computer systems made new services possible: in the event of an accident, the automatic TELEAID emergency call system sent an SOS signal that alarmed the rescue services and led them to the site of the accident. In the event of a breakdown, the TELEDIAGNOSIS telematics service established contact with the Customer Assistance Center (CAC) of Mercedes‑Benz at a push of the screwdriver icon on the handset of the car telephone, and simultaneously sent all required vehicle information as well as the exact location data of the car to the centre. The Service MB-Info allowed general questions to be directed to the customer advisor of the Customer Assistance Center with the aid of the TELEAID technology or advice to be obtained from the experts regarding any issue about the car.

For the customisation of the CLK Coupé Mercedes‑Benz had developed the ELEGANCE and AVANTGARDE lines, which varied in the accent set through special design and equipment features.

In mid-2004 Mercedes‑Benz again significantly upgraded the successful CLK-Class with respect to technology, look and equipment: for example, the Coupé now had DIRECT CONTROL technology, distinguished by modified axle bearings, more direct steering and shorter shift travel, and allowed even more dynamic handling with no change to the high level of ride comfort. The optional steering-wheel shift buttons for automatic transmission models, new audio equipment with European-wide navigation and bi-xenon headlamps with cornering light function also increased driving pleasure and provided greater safety. Thanks to the worldwide unique 7G‑TRONIC seven-speed automatic transmission - standard on the CLK 500 top model - the fuel consumption of the CLK 500 decreased by up to 0.6 litres per 100 kilometres. In the interior newly designed controls provided even greater value appeal.

The standard six-speed manual transmission was also overhauled: DIRECT CONTROL technology with shorter shift travel allowed fast and precise gear changes. For the first time, the CLK-Class was available with run-flat tyres, which Mercedes‑Benz combined with an automatic tyre pressure loss warning system. This system was based on the technology of the ESP® Electronic Stability Program and displayed a warning in case of sudden pressure loss in one of the tyres. Thanks to self-supporting tyre side walls, the driver could then continue the journey for up to 50 kilometres at a maximum speed of 80 km/h.

The model refinement also gave the CLK 55 AMG an even more efficient braking system as well as a new sport exhaust system with two distinctive dual tailpipes. A more intensive driving experience was moreover guaranteed by the modifications to the suspension and power transmission: the firmer spring/damper tuning and the 7 per cent more direct steering provided even better roadholding and significantly greater dynamics. 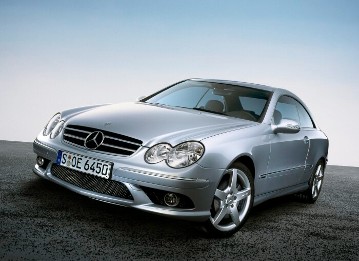