In June 1999 Mercedes‑Benz presented the facelifted version of the W 210 series E‑Class saloon. By then the Stuttgart automaker had already sold around a million 210 series vehicles in a four-year production period, making this E‑Class generation the world's most successful car in the upper executive market segment. In July 1999 the top-selling model was presented with a refined design and further perfected engineering. The innovations included new CDI diesel engines, a new six-speed manual transmission, windowbags as standard and state-of-the-art electronic assistance systems. In the course of the facelift more than 1800 components were modified or improved. Whilst the scope of standard equipment was greatly expanded, the price of the vehicles only increased by an average of 2.9 percent. Depending on the model this meant a saving of up to 2800 marks for the customer.

The refined design of the E-Class stayed true to the characteristic four-eyed face which set design trends in 1995. However, the designers sharpened the appearance and gave the E‑Class a more dynamic face. Details included a front section that was lowered by approximately two centimetres with a redesigned bonnet, a new radiator grille and a bumper covering that was now seamlessly integrated into the body. What's more, modified wings on the front allowed flatter and deeper fitting of the headlamps. The designers also adapted the exterior mirror casing and the tail lights to the fresh design.

In 1999 the facelifted E‑Class acquired two new CDI engines boasting a torque increase of up to 42 percent compared with the predecessor models. The five- and six-cylinder engines had common-rail direct injection, chargecooling and a turbocharger with variable turbine geometry. In the E 270 CDI the new five-cylinder engine delivered 125 kW (170 hp) and developed maximum torque of 370 newton metres from 1600 rpm. The new E 320 CDI with six cylinders offered even higher tractive power. The 145 kW (197 hp) direct injection diesel engine delivered maximum torque of 470 newton metres from 1800 rpm and this stayed constant up to 2600 rpm. This meant that the 3.2‑litre engine exceeded the torque of the previous six-cylinder diesel engine in the E‑Class by more than 42 percent whilst setting a new benchmark among comparable passenger car engines. In the European Driving Cycle the six-cylinder engine was satisfied with just 7.8 litres of diesel per 100 kilometres (NEDC combined fuel economy, saloon).

The two economical four-cylinder CDI engines that Mercedes‑Benz introduced in the E‑Class in July 1998 also featured the new variable turbocharger. This increased the engine output by up to 14 percent: the E 200 CDI now delivered 85 kW (115 hp) and the E 220 CDI had an output of 105 kW (143 hp). At the same time the torque of each of the four-cylinder engines increased by 15 newton metres. The range of engines continued to include the established petrol engines with four, six and eight cylinders. Alongside the E 280 and E 320 the eight-cylinder E 430 (saloon, estate) was now optionally available with innovative 4MATIC all-wheel drive. In 1999 a total of ten engines with a performance spectrum ranging from 85 kW (115 hp) to 260 kW (354 hp) was available for the W 210 series.

Mercedes-Benz had developed a new six-speed manual transmission that came as standard for the diesel and petrol models with displacement of up to 2.8 litres. The sixth gear was designed as an overdrive and greatly reduced the engine speed level when driving on motorways. This enabled drivers to save up to 0.5 litres of fuel per 100 kilometres depending on the driving style, route and engine type. Thanks to sophisticated multiple-cone synchronisation for the 1st to 4th gears the new transmission was characterised by very smooth gear changing. The gearshift force was reduced by more than 25 percent as against the previous five-speed transmission. The five-speed automatic transmission was fitted with electronically monitored Touchshift as standard, which greatly enhanced the operating comfort.

In the facelifted E‑Class Mercedes-Benz consistently continued the successful design and equipment line concept originally adopted from the W 202 C-Class. However, the CLASSIC, ELEGANCE and AVANTGARDE variants were now distinguished by an even more individual design, reinforcing their independent character. All lines were based on greatly expanded standard equipment with innovative safety features such as the electronic stability programme ESP®, windowbags and also the multifunctional steering wheel adopted from the S-Class, which greatly facilitated operation of the car radio and car phone.

The new operating and display concept for the E‑Class also included a clearly arranged central display in the instrument cluster. Not only did it inform the driver about the functions of the standard stereo car radio, car phone and other systems, it also enabled individual settings to be programmed with buttons on the steering wheel. Further innovations adopted by the engineers from the S-Class were available as options. These included actively ventilated comfort seats for driver and passenger, the dynamic navigation system (DynAPS) and the modern cockpit management and data system COMAND with integrated stereo radio, audio cassette player, TV receiver and navigation system.

In 1999 the scope and intensity of the facelift underlined the importance of the E‑Class for the Mercedes‑Benz model range: by then the 210 series accounted for 23.6 percent of all passenger cars built by Mercedes‑Benz. In its market segment the E‑Class achieved a market share of 25 percent in Western Europe and more than 30 percent in Germany.

In September 1999 Mercedes-Benz presented the E 55 AMG as a top version of the facelifted 210 series at the International Motor Show in Frankfurt. Whilst the sports saloon continued to be powered by the M 113 E 55 5.4‑litre engine presented in 1997, considerable changes had been made to the equipment and design. Striking new exterior features included the restyled front apron with integrated front fog lamps, side skirts painted in the exterior colour and a rear apron specially designed for the E 55 AMG.

The standard equipment, which was based on the AVANTGARDE equipment line, included automatic climate control, electrically adjustable sports seats for driver and front passenger with memory function and multicontour backrest, seat heating, metallic paintwork and parametric steering. For the first time the new electronic tyre pressure monitoring system was available as an option for the E 55 AMG, as were bi-colour leather appointments for the interior. Between 1997 and 2001 a total of around 12,000 vehicles of this model were built.

With output of 260 kW (354 hp) the 5.4‑litre V8 engine delivered enough power for top performance otherwise reserved for thoroughbred sports cars. The sporty saloon accelerated from 0 to 100 km/h in 5.7 seconds and reached an electronically limited maximum speed of 250 km/h. The suspension had an even firmer setup than the sporty E 430.

From mid-2000 a new two‑litre compressor engine provided an even more dynamic driving experience in the Mercedes‑Benz E‑Class. The E 200's four-cylinder engine with a mechanical turbocharger, which was also fitted in the new C-Class and CLK, delivered 120 kW (163 hp) and replaced the previous two‑litre engine with 100 kW (136 hp). The new compressor engine developed maximum torque of 230 newton metres from a speed of 2500 rpm, exceeding the figure achieved by the naturally aspirated engine by around 21 percent. The time that the saloon took to accelerate from 0 to 100 km/h was therefore reduced by 1.1 seconds to 9.7 seconds, whilst the top speed increased to 222 km/h (previously 209 km/h). As the cutting-edge four-cylinder engine had constant maximum torque over a wide speed range of 2500 to 4800 rpm, the E 200 compressor also boasted excellent in-gear performance figures: in fifth gear it accelerated from 60 to 120 km/h in just 19.6 seconds. Despite the higher power output the E‑Class with a compressor engine consumed up to 0.2 litres less fuel per 100 kilometres than its predecessor. From 1999 to 2000 an E 200 Kompressor with a more powerful engine (141 kW/192 hp) had already been sold as an export model.

In 2000 the E 240 also acquired a new engine: the M 112 E 26 engine replaced the previous M 112 E 24 2.4‑litre engine. At the same time the displacement increased to 2597 cubic centimetres and the V6 engine developed approximately seven percent more torque despite the same power output of 125 kW (170 hp). 240 newton metres were now available at 4500 rpm. This meant that the E 240 had much greater acceleration power and better in-gear acceleration when overtaking. The new E 240 saloon sprinted from 0 to 100 km/h in 9.3 seconds, the top speed increased by five kilometres to 229 km/h, and at 11.3 litres per 100 kilometres (NEDC combined fuel economy) the fuel consumption only increased slightly as against the previous E 240. The exhaust emissions of the E 240 were below the limit values specified in the EU4 standard.

When in March 2002 the W 210 E-Class was superseded by the W 211 successor model, sales averaging more than 200,000 vehicles per year had established it as the world's best-selling luxury saloon. The E‑Class had an average share of 24 percent in this market segment - and in some countries even more than 40 percent. Between 1995 and 2002 Mercedes‑Benz built 1,374,409 E‑Class 210 saloons. With a share of almost 20 percent the E 320 was the most popular E‑Class model variant, followed by the E 220 CDI with around 16 percent as the best-selling model variant in Europe. 55 percent of buyers chose the ELEGANCE equipment line, and around 25 and 20 percent respectively opted for the AVANTGARDE and CLASSIC lines.

Do you want to set this media object as main picture?
A99F2142 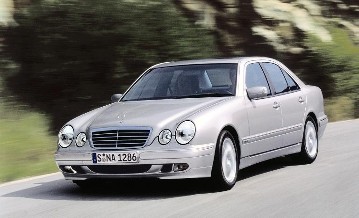 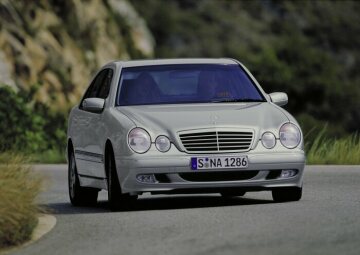 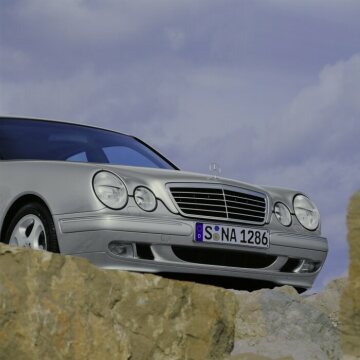 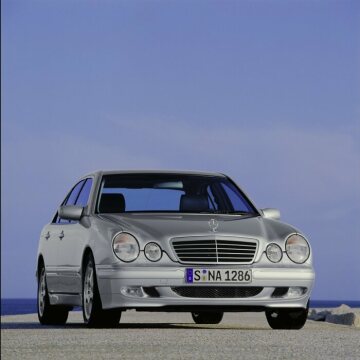 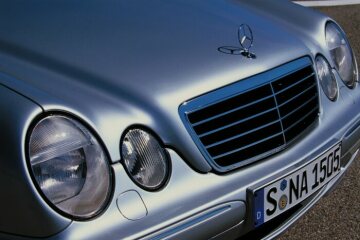 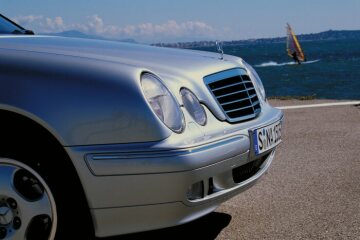 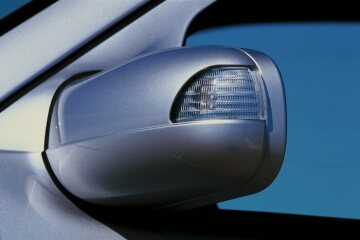 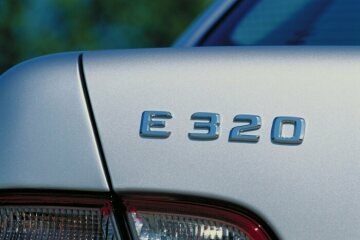