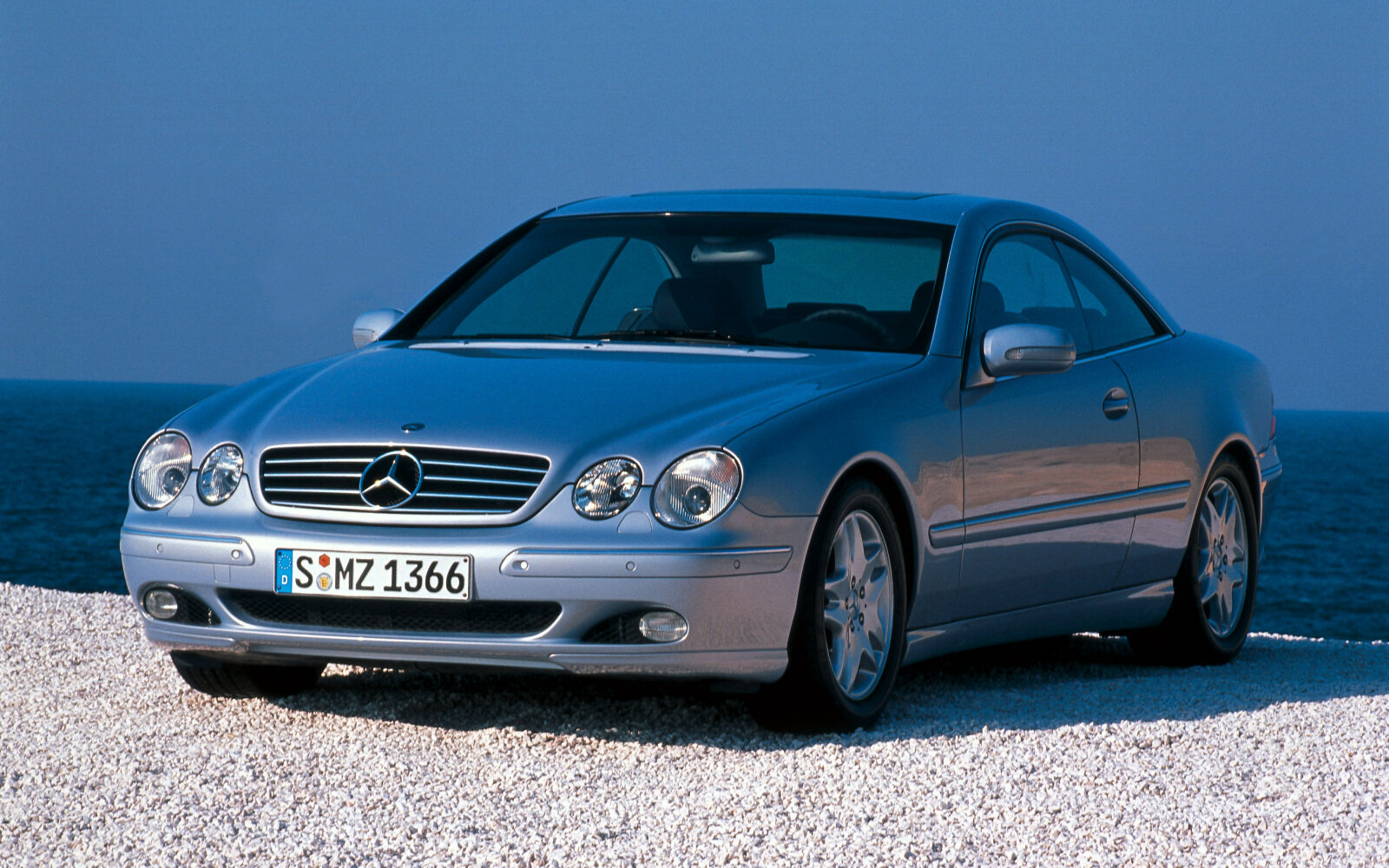 In March 1999, Mercedes‑Benz launched the Series C 215 CL-Class at the Geneva Automobile Salon. Sale of the innovative coupé in the European Mercedes‑Benz sales organisation and in Japan began in August 1999. Initially, Mercedes‑Benz brought out the top-of-the-line model in the form of the 225 kW (306 hp) CL 500, which was available from October 1999. The CL 600 top model with a newly developed, especially smooth-running 12-cylinder engine followed in spring 2000. The powerplant delivered 270 kW (367 hp) with a torque of 530 Newton-metres. Mercedes‑Benz unveiled the CL 55 AMG as a sporty and exclusive version of the CL-Class, powered by a 5.5-litre V8 engine with 265 kW (360 hp).

The large coupé sported a typical Mercedes front end with expressive twin headlamps as a re-interpretation of the familiar "four eyes face". The elongated silhouette was characterised by a long, squat bonnet, the dynamic curvature of the roof line and the distinctive rear end. Full-length side windows and the absence of B-pillars gave the basic body an airy look. The styling underscored the dynamism of the two-door car, lending it a unique character exuding both sportiness and elegance.

The Series C 215 CL-Class was in the tradition of the large coupés from Mercedes‑Benz. The engineers followed the same development philosophy that had been characteristic of the S-Class, combining agility and elegance in design idiom with the latest technology. The coupé thus came as standard with innovations that no other car in the world featured. One of the highlights was the novel Active Body Control (ABC) suspension system, which allowed a hitherto unparalleled optimum in sportiness and comfort. By means of sensor signals and special hydraulic cylinders on the axles, ABC almost totally compensated for rolling and pitch motions of the body when starting off, cornering and braking.

The standard equipment of the new large coupé included a comprehensive safety package with front airbags, sidebags and windowbags. Also on board were the ESP® Electronic Stability Program, acceleration skid control (ASR), anti-lock braking (ABS), Brake Assist (BAS), novel bi-xenon headlamps with washers and PARKTRONIC. The top position of the coupé in the Mercedes‑Benz line of models was further underscored by standard features such as the multifunction steering wheel, adjustable steering column, five-speed automatic transmission with touch shift and SPEEDTRONIC, automatic climate control with activated charcoal filter, electrically adjustable leather seats with memory function, MB Audio 30 radio, leather on the instrument panel and doors and stylish wood trim. The special exclusivity of the top CL 600 model was also emphasised by the COMAND operating and display system, telephone, Bose sound system, upholstery in exclusive nappa leather as well as pillar panelling and a headliner in soft Alcantara.

The large coupé boasted exemplary aerodynamics (Cd=0.28) and consistently lightweight design, combining various lightweight materials such as aluminium, magnesium, steel and plastic, this yielding a weight saving of up to 340 kilograms compared with the predecessor model of the C 140 series. The wheelbase of the C 215 model series was 2,885 millimetres, the body being 4,993 millimetres long, 1,857 millimetres wide and 1,398 millimetres high.

For the first time, Mercedes-Benz launched a large coupé from AMG in the 215 model series. An especially sporty variant, the CL 55 AMG enjoyed an exceptional status among luxury coupés, accelerating from 0 to 100 km/h in 6 seconds, with the top speed electronically limited to 250 km/h. The CL 55 AMG was optionally available without speed limitation. Its looks were even more in tune with the sporty character of the vehicle: optionally available was subtly integrated, yet still expressive AMG styling, which included revised front and rear aprons as well as new side skirts. The also optionally available 19-inch AMG light-alloy rims with an exclusive five-spoke design were not just eye-catching, but also optimised the vehicle's handling while improving the ventilation of the brake discs. The entire braking system was from the CL 600 12-cylinder coupé. The standard equipment on the Mercedes‑Benz CL 55 AMG also included the AMG instrument cluster with 320 km/h scale, AMG exhaust system and sporty transmission tuning.

As far as the suspension was concerned, the Mercedes-AMG engineers intentionally avoided any technical modifications, for the Active Body Control (ABC) on the standard-production model had been a milestone in vehicle dynamics and ride comfort. Every CL-Class model cornered with a greatly reduced tilt, providing a significantly higher level of safety during high-speed evasive manoeuvres compared to cars with conventional suspension technology.

In summer 2000, the Mercedes-Benz CL 55 AMG "F1 Limited Edition" was unveiled. This model was the world's first homologated automobile to feature an especially efficient ceramic braking system. For the high-performance coupé, Mercedes‑Benz engineers had developed internally ventilated brake discs of fibre-reinforced ceramic. The special model was based on the CL 55 AMG Formula 1 safety car.

The ceramic brake discs were pressed into shape under high pressure at the Daimler plant in Esslingen-Mettingen near Stuttgart from carbon fibre, coal powder and resin before being baked at 1000 degrees Celsius. Having cooled, the brake discs underwent brief machining before being treated with liquid silicon. The carbon matrix absorbed the silicon like a sponge and reacted with the ceramic.

Under emergency braking from top speed, the ceramic brakes produced a braking power of approximately 1471 kW (2000 hp). The advantages of the totally novel technology in a series-production vehicle lay also in the significantly lower weight of the brake discs. Thus, each disc weighed about 60 per cent less than the steel version. The noticeable reduction in unsprung mass meant greater vehicle dynamics and driving pleasure. The ceramic brakes once again demonstrated Mercedes‑Benz's worldwide leadership in the development of trend-setting technologies in automotive engineering.

In spring 2001, Mercedes-Benz introduced natural-stone interior trim in the CL-Class. The Stuttgart brand was the world's first automotive manufacturer to use such components. Available as part of the customised designo line for CL-Class coupés, they optionally adorned the centre console, door panel lining, steering wheel rim and gearshift lever.

The parts were made from high-grade south Norwegian larvikite stone. The selected type of stone known as "Labrador Blue Pearl" was an extremely hard plutonic rock composed mainly of feldspar. These minerals reflected incident light, making some crystals appear light blue while creating a pearl-like shimmer on the surface.

One of the greatest challenges in production was to avoid bending the natural stone and thus spanning it across curved surfaces. Mercedes‑Benz's solution, protected by four patents, involved breaking up the grain structure of the stone. This also allowed extremely small radii when shaping the trim.

First, a 0.6 to 0.8 millimetre thin stone section was prepared with a diamond saw. These plates were fixed in place with an adhesive layer before their structure was broken up between two rotating rollers. The resulting film could be laid around tight edges, while the typical features of the stone remained intact - including the crystalline structure crucial for optical effect.

Mercedes-Benz unveiled the CL 63 AMG as the new top-of-the-line model of the 215 series at the International Motor Show (IAA) in Frankfurt/Main in autumn 2001. The coupé was powered by a newly developed V12 engine with impressive output and torque: from its displacement of 6,258 litres, the powerplant delivered 326 kW (444 hp) with a maximum torque of 620 Newton-metres. Such engine data resulted in top-drawer performance, the CL 63 AMG accelerating from rest to 100 km/h in 5.5 seconds - 0.2 seconds faster than the new high-performance S 63 AMG saloon.

In addition to peaking at 620 Newton-metres at 4400 rpm, especially the torque curve of the new AMG 12-cylinder engine was impressive: between 2,500 and 5,800 rpm, over 530 Newton-metres, or 85 per cent of the peak torque, was permanently available. The ample power on offer allowed acceleration on a par with that of a pedigree sports car as well as effortlessly superior, relaxed cruising in top gear. The AMG 12-cylinder engine was newly developed on the basis of the powerful and refined 5.8-litre V12 powerplant in the CL 600.

The number 63 in the model designation of the new top-of-the-line coupé reminded brand aficionados of the legendary Mercedes‑Benz 300 SEL 6.3.

In August 2002, Mercedes-Benz launched the new generation of the 215 model series. 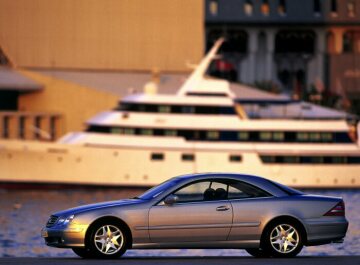 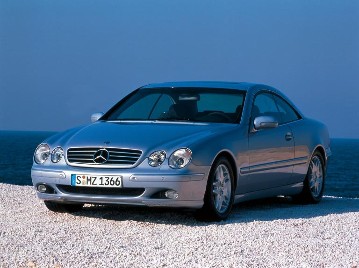 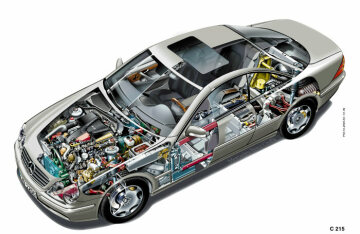 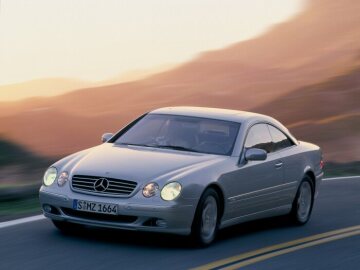 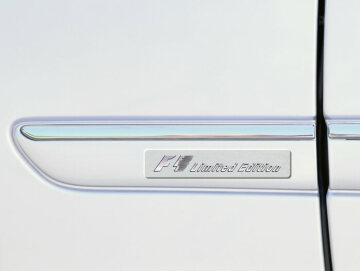 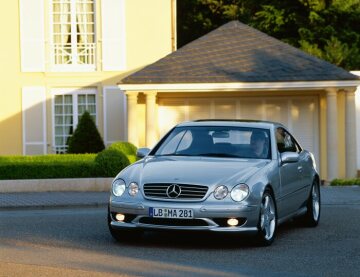 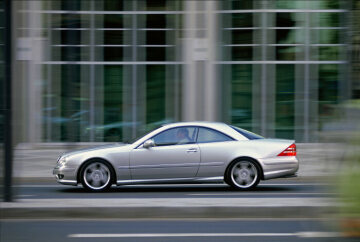 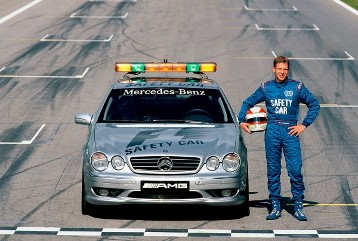 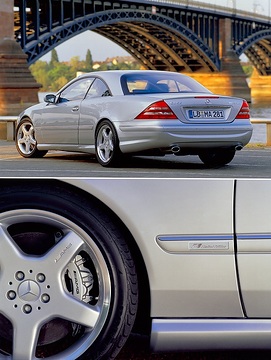