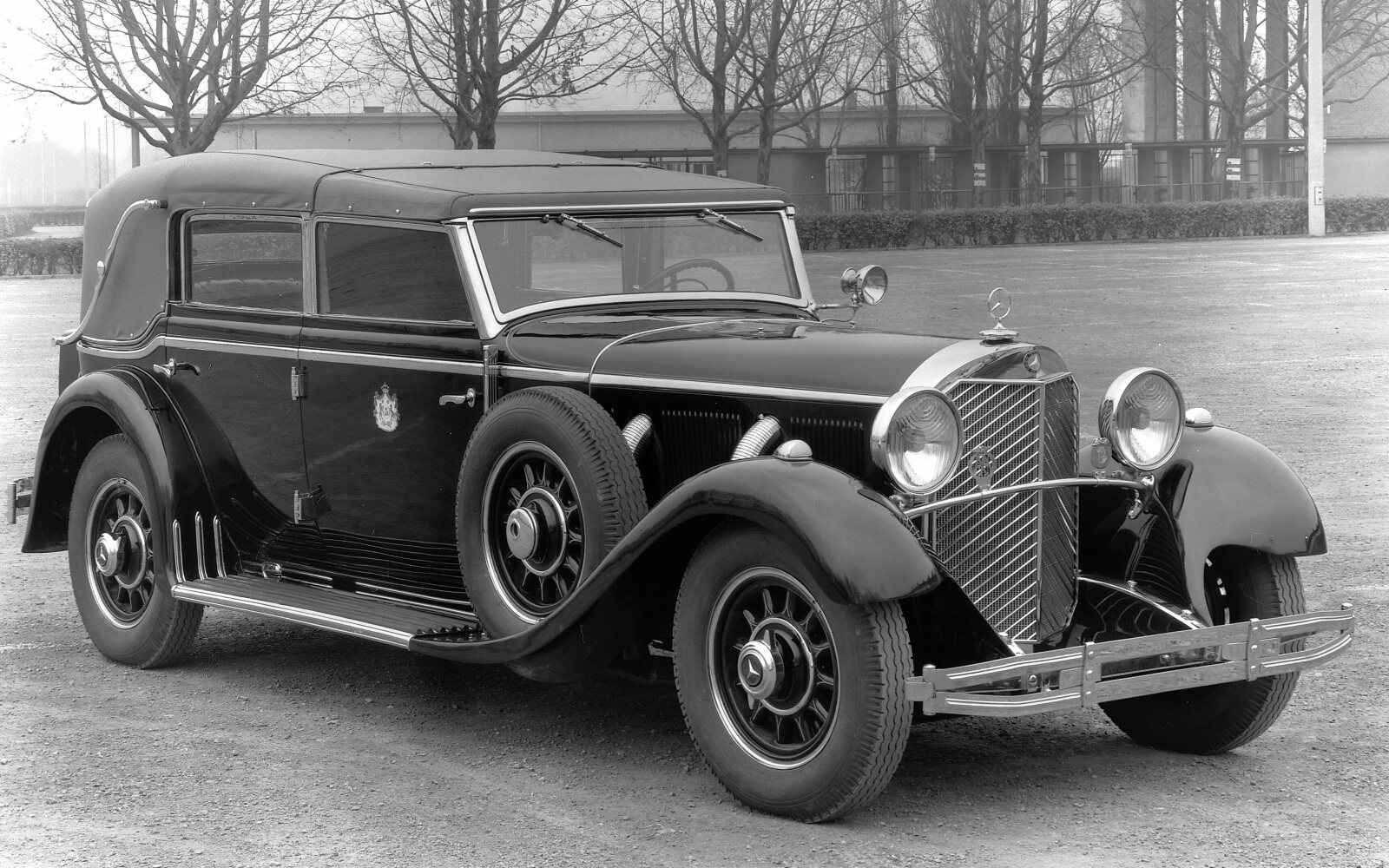 The first "Grand Mercedes" was produced in Stuttgart-Untertürkheim in September 1930 at the end of a two-year development period. When the vehicle was unveiled in October at the Paris Motor Show, it was made clear to everyone that Daimler-Benz was back in business in the high-end segment of international automotive engineering. The Mercedes-Benz "Grand Mercedes" or "Super Mercedes Straight Eight", as it was known in English, was initially available with and without a supercharger. The 7.7-litre eight-cylinder in-line engine had a power output of 150 hp in naturally aspirated mode, with this figure rising to 200 hp when the Roots supercharger cut in at wide-open throttle. Despite being free to choose, only 13 out of a total of 117 customers ordered their "Grand Mercedes" without the supercharger. The price saving was RM 3,000, while a pullman saloon cost a total of RM 41,000. Like the "S"‑series models, the "Grand Mercedes" was equipped with dual ignition. Of the two spark plugs per cylinder, one was supplied by high-voltage magneto ignition and the other by battery ignition.

The vehicle came with a three-speed transmission with manually selectable overdrive, which gave the driver a choice of six gears in total. The "Grand Mercedes" had an H-section rigid axle at the front and a banjo-type rigid axle at the rear. Both were attached to the U‑section ladder-type frame by means of semi-elliptic springs. In this respect, the vehicle did not differ from its greatest German competitor, the Maybach Zeppelin. Mercedes-Benz's top-of-the-line model was supplied with either wood-spoked wheels (known also as artillery wheels) or wire spoke wheels with Rudge hubs.

In spite of its technically conservative design, the "Grand Mercedes" quickly gained recognition and acceptance in many countries, the Japanese imperial family alone ordering six examples of the "Grand Mercedes" between 1932 and 1935. The new top-of-the-line model from Mercedes-Benz also enjoyed growing popularity among industrialists and high financiers. The vehicles were individually custom-built by bespoke coachbuilders. While the range of vehicles with bodies built in Sindelfingen was initially confined to the pullman saloon, the chassis-only version was additionally available for the mounting of third-party coachwork. While the convertibles B, C, D and F as well as a seven‑seater open tourer were added to the choice of bodies in September 1932, according to the price list they were available only in the supercharged version. From February 1936, the pullman saloon and chassis-only version, too, were available only with a supercharger.

In the course of the production span, the body design underwent a transformation from rather box-shaped bodies with upright windscreens to more appealing examples of coachwork with flowing lines and raked front screens. A visual signature feature was the wedge-shaped pointed radiator, which afforded both vehicle and owner an impressive aura. The high ride comfort and quality standard of this superlative automobile made a significant contribution to the global acceptance of the Mercedes-Benz brand.

Another special feature of the "Grand Mercedes" was that it was one of the first motor vehicles to be made available ex factory in an armour-plated version. At least one of the exemplars supplied to Japan's Emperor Hirohito was armour-plated and, since its return in 1971, has been on show in the Mercedes-Benz Museum - next to a Convertible F of the same model that was used by Kaiser Wilhelm II up until his death. The side window, rear screen and glass partition in the "Hirohito automobile" are made of up to four layers of glass with a thickness of up to 22 mm. The roof and doors are armoured with steel plates. Delivered in January 1935, this exemplar was preceded in August 1932 by a "Grand Mercedes" in a special protection version. Three further armour-plated vehicles were to follow.

The "Grand Mercedes", which carried the internal design code W 07, was produced in Untertürkheim. Unless third-party coachbuilders were commissioned, the bodies came from Sindelfingen - with one exception, which was built by the Mannheim plant in March 1936. A total of 117 units were produced, 42 of them in 1931 alone. After that, between four and 13 units were built each year. The most common body variant was the pullman saloon with 42 units, followed by the open tourer with 26 units. Nineteen "Grand Mercedes" were delivered in chassis-only form, and 18 as Convertible D. The other vehicles were shared between convertible variants F, C and B.

The last unit of the W 07 was produced in October 1938. At the same time, there began series production of the successor model, which, unveiled in February 1938, carried the same magical name and was given the in-house design code W 150. Official announcements from those years always referred to the W 07 as the Mercedes-Benz "Grand Mercedes" or Model 770 "Grand Mercedes". The designation 770 K, as sometimes found today in the literature, was never used for either the W 07 or its successor, the W 150.