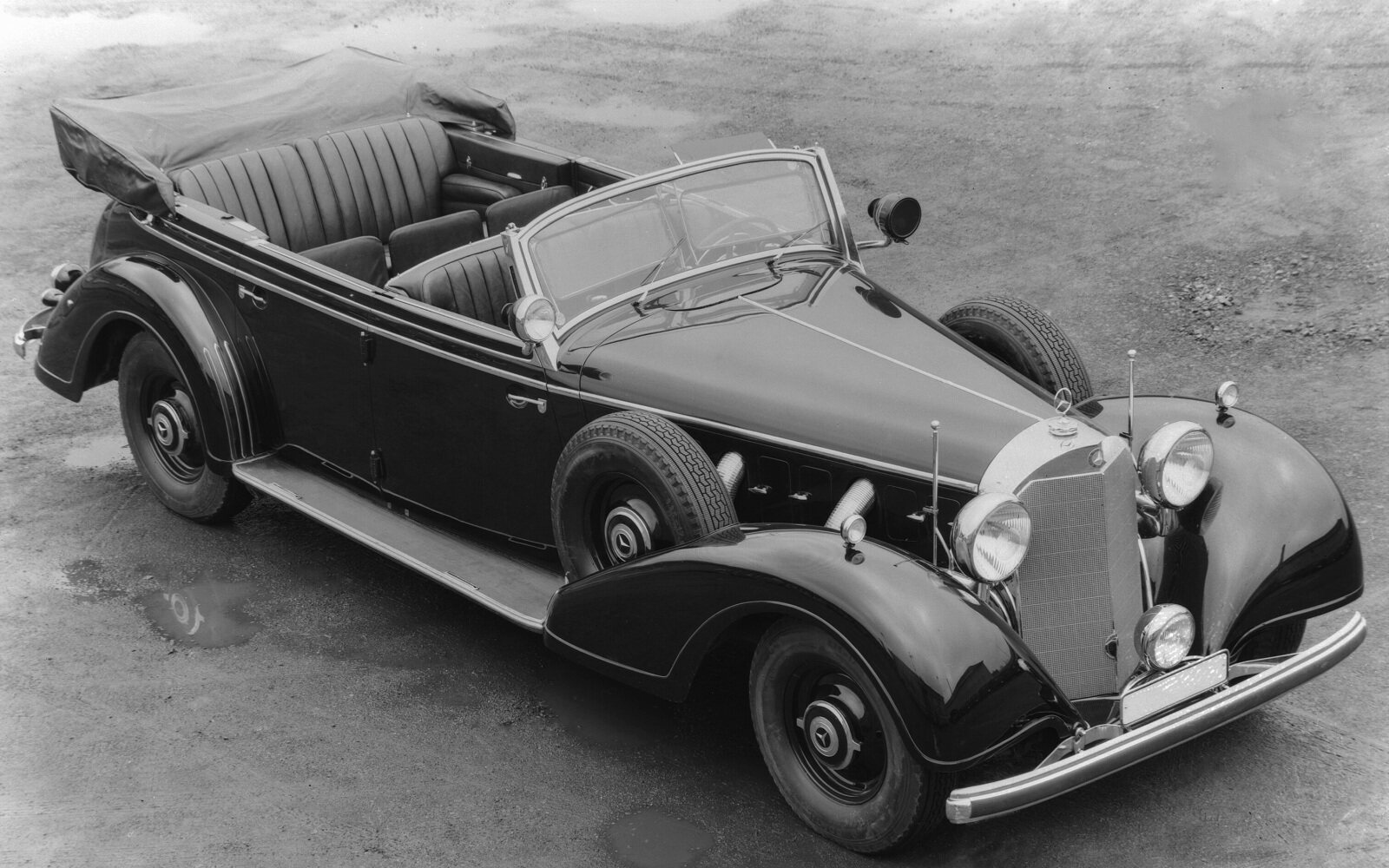 Wide acceptance of the "Grand Mercedes" in government circles, together with the no longer up-to-date technical design of the top-of-the-line model, resulted in the board of management of Daimler-Benz AG deciding to develop a successor to the Model 770.

The new "Grand Mercedes" was the surprise of the Daimler-Benz stand at the 1938 International Motor and Motorcycle Show. Unlike its predecessor, the W 07 with its decidedly conservative chassis and suspension, the W 150 boasted every state-of-the-art advance that had been made in the field of automotive engineering. Under the direction of Max Sailer, chief designer Max Wagner, who had moved from Benz & Cie. to Untertürkheim together with Dr Hans Nibel, developed the new "Grand Mercedes" while availing himself of the experience he had gained when designing the Silver Arrows W 125 and W 154.

The frame, which was a box section frame of thin-walled oval tubes, provided high stiffness in combination with low weight. The front wheels were independently suspended from two trapezoidal links, each a one-piece forging, with a coil spring in the middle. The rear axle was a de Dion axle - referred to within the company as a parallel-wheel axle - with coil springs. With such a progressive chassis and suspension, the new "Grand Mercedes" offered excellent ride comfort together with outstanding handling.

In contrast to its predecessor, the W 07, the W 150 was available exclusively with the supercharged engine. The engine design of the predecessor was basically retained. Thanks to higher compression and increased engine speed, the power output from the large in-line eight-cylinder powerplant climbed from 200 hp to 230 hp. Power transfer to the rear axle was by means of a five-speed transmission.

The "Grand Mercedes" was officially available as a pullman saloon, Convertible D or F and open tourer. Of each of these body variants, a few specially armour-plated units were built. A further ten armour-plated four-door saloons were produced for the government between June 1943 and July 1944. The gross vehicle weight of the standard vehicles was 4200 kg, with this rising to 5420 kg for the armour-plated versions, in which case the top speed was reduced from 170 km/h to 80 km/h for reasons of tyre endurance.

All W 150 bodies were custom-built at the Sindelfingen plant by the "special vehicle production facility", which was separate from the series production line. Under the direction of Hermann Ahrens, these bodies were manufactured in accordance with the specific wishes of the individual customers. Many bodies bore the signature of Friedrich Geiger, who, after the war, became the first person to head the newly created Styling department.

A total of 88 units of the W 150 were produced, half of them in 1939 alone. With just one vehicle being built in each of 1940 and 1941, production rose again in 1942/43 to 29 vehicles, almost all of them in the armour-plated version. The last three chassis units were manufactured at the Untertürkheim plant in June 1943. However, the last vehicle to be finished was not delivered until July 1944, presumably because, under wartime conditions, production and assembly of the armour-plated body were subject to certain restrictions.

The open tourer, with 46 units, was the most popular body variant of the W 150, followed by the pullman saloon with 18 units and the armour-plated four-door saloon with 10 units. Convertibles F and D were produced in seven and five units, respectively, with one Convertible B and one chassis also being built.

Like its predecessor, the W 150, too, was always referred to as the Mercedes-Benz "Grand Mercedes" or Model 770 "Grand Mercedes". The designation 770 K is of more recent date and not authentic.