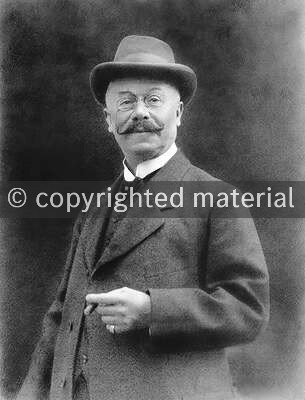 At the beginning of the twentieth century, Emil Jellinek was the best, yet also the most difficult customer of Daimler-Motoren-Gesellschaft.

Jellinek was an extremely successful businessman and insurance agent in Vienna, whose business activities were so profitable that he was able to set up an office in Nice. In addition to this, Jellinek was interested early on in the advances made in motoring. In 1897 he traveled to Cannstatt to order his first Daimler. When the car - a 6 hp belt-driven car with a two-cylinder engine - was delivered in October 1897, Jellinek was greatly disappointed: the car, with its top speed of 24 km/h, was far too slow for him. Jellinek demanded 40 km/h and ordered two more cars: both supplied in September 1898, the two Daimler "Phoenix" cars with front-mounted 8 hp engines were the world's first road vehicles with four-cylinder engines.

Shortly, Jellinek increasingly used his position as a businessman to advertise and sell Daimler automobiles, in particular in society's highest circles. In 1899, DMG had already supplied Jellinek with ten cars, and in 1900, with as many as 29.

Jellinek demanded ever faster and more powerful cars from DMG and entered these in race meetings - the most important of these being the Nice week - where he would race under a pseudonym. He would use the first name of his daughter from his first marriage, born in 1889. Jellinek's pseudonym "Mercédès" was commonly heard in motoring circles. In April 1900, when Jellinek and DMG made an agreement about the sale of cars and engines, the name was also included as a product designation. Above all, it was decided that a new engine would be developed which would "bear the name Daimler-Mercedes". A good fourteen days later, Jellinek ordered 36 vehicles with a total price of 550,000 marks - truly a huge order in view of the circumstances of the time. Several weeks later, he placed a renewed order for 36 vehicles, all with 8 hp engines.

The first vehicle to be fitted with the new engine, a 35 hp racing car, was supplied to Jellinek on December 22, 1900. This first "Mercedes", developed by Wilhelm Maybach, the chief engineer at DMG, caused a stir at the start of the century. With its low center of gravity, its pressed steel frame, its light and high powered engine and its honeycomb radiator, it brought in numerous innovations, and is regarded today as the first modern automobile.

The Nice week in March 1901, at which the Mercedes entered were unparalleled in practically every discipline, helped Jellinek and the Mercedes to extraordinary publicity. In March and August 1901, the 12/16 hp and 8/11 hp models appeared. Due to Jellinek's orders, the production capacity of the Daimler plant in Cannstatt was more than fully utilized.

On June 23rd, 1902, the name "Mercédès" was announced as a trademark, and was legally registered on September 26th. In June 1903, Emil Jellinek obtained permission to call himself Jellinek-Mercedes from then on. " This is probably the first time that a father has taken his daughter's name," commented Jellinek.

In 1909 he withdrew from the automobile business.