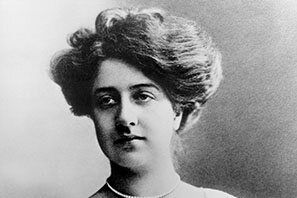 She was the third child from businessman Emil Jellinek's (April 6th, 1853 - January 21st, 1918) first marriage to Rachel Goggman (April 29th, 1854 - September 18th, 1893). Her siblings were called Adolphe and Fernand. Initially, the family lived in Oran, then in Vienna and Baden near Vienna and they spent the winter in Nice.

On February 20th, 1909 Mercédès married the Viennese Baron Karl Schlosser in Nice. From this marriage was born a daughter, Elfriede (born in 1912) and a son, Hans-Peter (born in 1916), both of whom remained childless.

In 1923, Mercédès parted from her family, and married Viennese sculptor Baron Rudolf Weigl. She was widowed shortly after this, and on February 23rd, 1929, she died aged only 39 years in Vienna, where she is buried in the central cemetery.

Andrée Maja Jellinek, her younger half sister by 17 years, remembers: "Mercedes was a great, smart person and we got on wonderfully. She was theatrical and would have loved to have become an actress."

Mercedes Jellinek never actually owned an automobile, but her name wrote automobile history and coined one of the most well known brand names in the world. Her father Emil Jellinek, who was very involved in motoring, bought his first Daimler car in 1897 and demanded ever faster and more powerful vehicles from DMG. From 1898, he increasingly used his position as a businessman to advertise and sell Daimler cars, in particular in society's highest circles. To help sales, he entered the vehicles in race meetings - the most important being the Nice week - where he would race under a pseudonym. He used his daughter's name. The pseudonym "Monsieur Mercédès" was commonly heard in motoring circles. In April 1900, when Jellinek and DMG made an agreement about the sale of cars and engines, the name was also included as a product designation. It was decided that a new engine would be developed which would "bear the name Daimler-Mercedes".

A good fourteen days later, Jellinek ordered 36 cars with a total price of 550,000 marks - truly a huge order in view of the circumstances of the time. Several weeks later, he placed a renewed order for 36 cars, all with 8 hp engines. The first vehicle to be fitted with the new engine, a 35 hp racing car, was supplied to Jellinek on December 22nd, 1900. This first "Mercedes", developed by Wilhelm Maybach, the chief engineer at DMG, is regarded today as the first modern automobile.

The Nice week in March 1901, at which the Mercedes entered were unparalleled in practically every discipline, helped Jellinek and the Mercedes to unusual publicity.

On June 23rd, 1902, the name "Mercédès" was announced as a trademark, and was legally registered on September 26th.

In June 1903, Emil Jellinek obtained permission to call himself Jellinek-Mercedes from then on. "This is probably the first time that a father has taken his daughter's name," commented Jellinek.