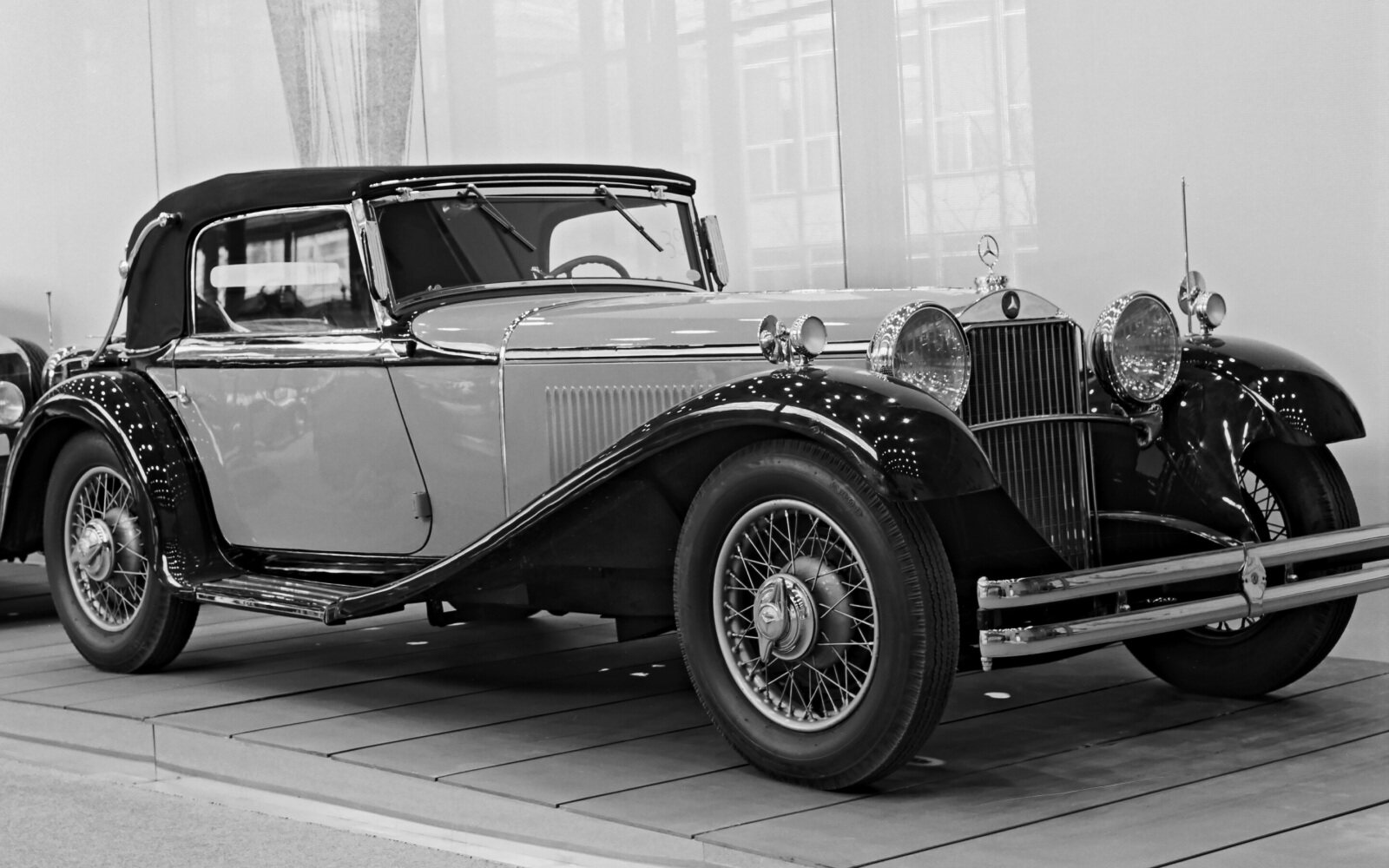 In October 1929, just one year after Ferdinand Porsche had left Daimler-Benz AG and Dr Hans Nibel had assumed sole responsibility as chief designer, a revised version of the 350 was unveiled at the Paris Motor Show. Bearing design code W 10, the new model had a power output of 70 hp and was given the name 14/70 hp Mannheim 350. This meant that, one year after the Nürburg and Stuttgart models, the W 10 was the third Mercedes-Benz passenger car to be named after a town. Today, the entire model family from W 03 to W 10 is often referred to collectively as the Mannheim model, although this really applied only to the W 10. Nibel had radically slimmed down the vehicle. The saloon had been made more graceful and lighter. It weighed 200 kg less and had a 230 mm shorter wheelbase. Despite the dimensions of the engine remaining unchanged, the power output had been raised to 70 hp. On account of the extensive modifications, the engine was given the new designation M 10. However, the transmission had now been downgraded to a gearshift box with three forward gears instead of the previous four. The choice of body variants comprised a four-seat open tourer, two saloons with four or six seats, a six-seater pullman saloon as well as the four-seater Convertibles C and D. Of course, the chassis-only version was also available.

February 1931 saw a new addition to the Mannheim model family when two sportily elegant variants were unveiled at the Berlin Motor Show: a Convertible NC with a shorter 3025 mm wheelbase and a sports convertible with lowered chassis and an even shorter 2850 mm wheelbase. Both variants were powered by a yet further modified engine, which, with cylinder dimensions of 82.5 x 115 mm, boasted a displacement of 3.7 litres with a power output of 75 hp. The convertible NC carried the official model designation 14/75 hp Mannheim 370 K (internal: WK 10), the K standing for "Kurz" (Short).

The sporty version with still shorter wheelbase was called the 14/75 hp Mannheim 370 S (internal: WS 10) and was available as a sports convertible or sports roadster. The low-slung two-seater bodies are reminiscent of the legendary SSK. Although the 370 S had nominally the same power output as the 370 K, its lower weight and twin carburettors gave it significantly livelier performance than the other 3.7‑litre models - without this fact immediately transforming it into a racing car like its big brother, the SSK.

In autumn 1931, the standard-wheelbase versions of the Mannheim 350 were also provided with the 3.7‑litre engine and were consequently renamed Mannheim 370. The three-speed transmission was optionally available with overdrive. The choice of body variants was unchanged from the Mannheim 350, except for the four-seater saloon, which was dropped from the range.

From the beginning of 1934, apart from the chassis-only version, the available range included just the pullman saloon and the Convertible C. At the same time, the 370, as it was now quite matter-of-factly called in some of the literature, was given a subtly pointed radiator and equipped as standard with overdrive. Despite these added benefits for the customer, the sales price was even further reduced: instead of RM 10,800 without overdrive, the pullman saloon with its new additions now cost just RM 9,000. Those customers who were happy with the flat radiator were able to make a further RM 250 saving. Also, the previous year's model without overdrive was on offer for just RM 7,950 - according to the official price list, without bargaining over price. In June 1934, the Convertible C, too, was removed from the model range. The Mannheim 370, or simply 370, continued to be manufactured as a pullman saloon until December 1934. It thus achieved the longest production span of all members of this overall somewhat erratic model family.

The successor to the Mannheim 370 was the 290 long (W 18), which had been unveiled in February 1934. The basic version of this modern swing-axle vehicle had been launched one year before together with the similarly designed Model 200 (W 21), which replaced the Stuttgart 200. The Mannheim 370 continued to feature in the price list until September 1934. The end of its production in December, five months after the Stuttgart 260, marked a watershed in the history of the still young Mercedes-Benz brand: the first two model ranges of passenger cars, based on the 8/38 hp and 12/55 hp, had now been finally phased out, thereby ushering in the first genuinely new generation of Mercedes-Benz passenger cars.