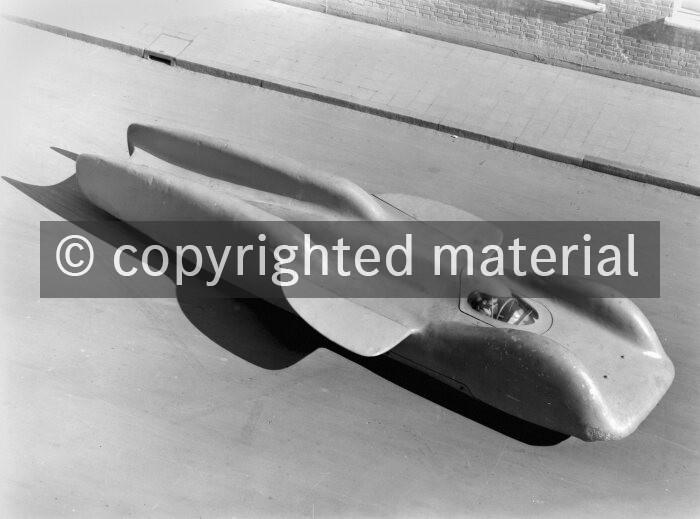 The project of the world record car T 80 goes back to an initiative of racing car driver Hans Stuck who, in 1936, wanted to become the world’s fastest man. Stuck planned to let Ferdinand Porsche design a record car while using two Daimler-Benz DB 600 series aircraft engines which were provided by the Reichsluftfahrtministerium (Air Ministry). In his search for options to realise this, Stuck reached out with his plans to Daimler-Benz chairman Wilhelm Kissel. Kissel could be persuaded, and in March 1937 Porsche presented his concept. In the late summer of 1938 Daimler-Benz had completed the components of the record car.

But the engine was still missing. Its power requirements were estimated at 2,200 hp minimum for the planned top speed of 550 km/h. In September 1938 there was a duel between George Eyston and John Cobb in the American Bonnevill area, where both repeatedly set new records with their world record cars. The top speed reached during those American world record drives of more than 575 km/h caused Porsche to set the target speed to 600 km/h; for that purpose, he calculated a performance requirement of 3,000 hp.

The DB 603, which was still being tested at that time, was an adequately powerful aircraft engine. It was meant to be borrowed for the record drive from the Reichsluftfahrtministerium. To get the power of the engine on the ground, the Porsche designers decided upon a vehicle with three axles with two driven rear axles. The total weight of the car without driver and fuel was almost exactly 3,000 kg. When the chassis and body were nearing completion in the beginning of 1939, the DB 603 was not yet able to provide the necessary performance.

Stuck didn’t think of the original plans to drive the record on the Bonneville salt lake in the US state Utah as realistic anymore because of the political situation. Instead, a segment of the Autobahn near Dessau was concreted over the whole width and was intended to be the venue for the record attempt. In October 1939 a bit of fine-tuning was still necessary until the completion of the T 80 which would have taken around one month. The Oberste Nationale Sportbehörde (Highest National Sports Agency) had set a record week at Dessau for October 1940, at which the T 80 was supposed to be the main attraction. World War II prevented this from happening; in February the DB 603 experimental engine was brought back to the aircraft engine testing facilities, and in June 1940 the car was stored away. Even at a later point in time, the T 80 was never able to prove its performance capabilities.