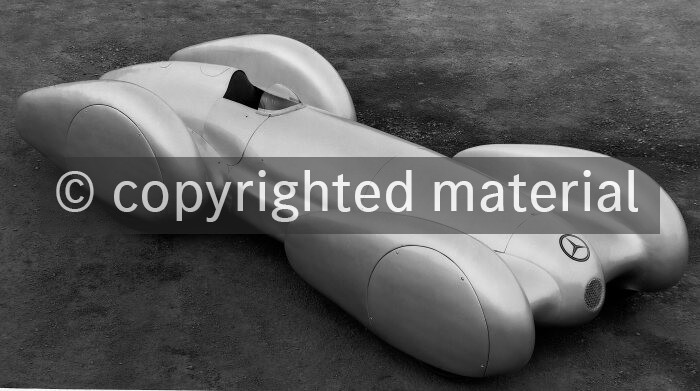 3-liter record car based on the W 154 Grand Prix racing car, used for record runs from a standing start

For special occasions outside of the racing circuits like hill climb races or record drives, Daimler-Benz had constructed a particularly lightweight chassis with serial number 11. Apart from weight and power, aerodynamics was a deciding factor for such races because of the high speeds achieved there. Already since 1935 Daimler-Benz had been doing research on that matter, not the least because of high speed tracks like the Avus, Monza or Tripoli.

The W 154 also profited from this research: A W 154 model with free-standing wheel houses and no covers resulted in a drag coefficient of 0.587, wheel covers reduced this value to 0.406. For a record attempt in 1939, a tailor-made body in two versions was constructed for the W 154 for that reason. For a dead start, a body with free-standing, but fully covered wheels was used. The fact that this significantly limited the turning circle was not an issue seeing as the record drives were driven exclusively in a straight line. For the same reason, a fully locked differential was used.

For the record drives, the focus was on systematic lightweight construction. The front wheel brakes were omitted, the drum brakes on the rear axle was made narrower, oil cooler and other components were removed. The transmission setup posed a problem because there was a conflict between the kilometre and the mile caused by different top speeds achieved respectively. Since an exchange of the transmission between drives was out of the question, different wheel sizes were chosen as a solution: For the kilometre, 19-inch wheels were used and 22-inch wheels for the mile. This way, an optimal transmission ratio could be achieved with the one and the same transmission.