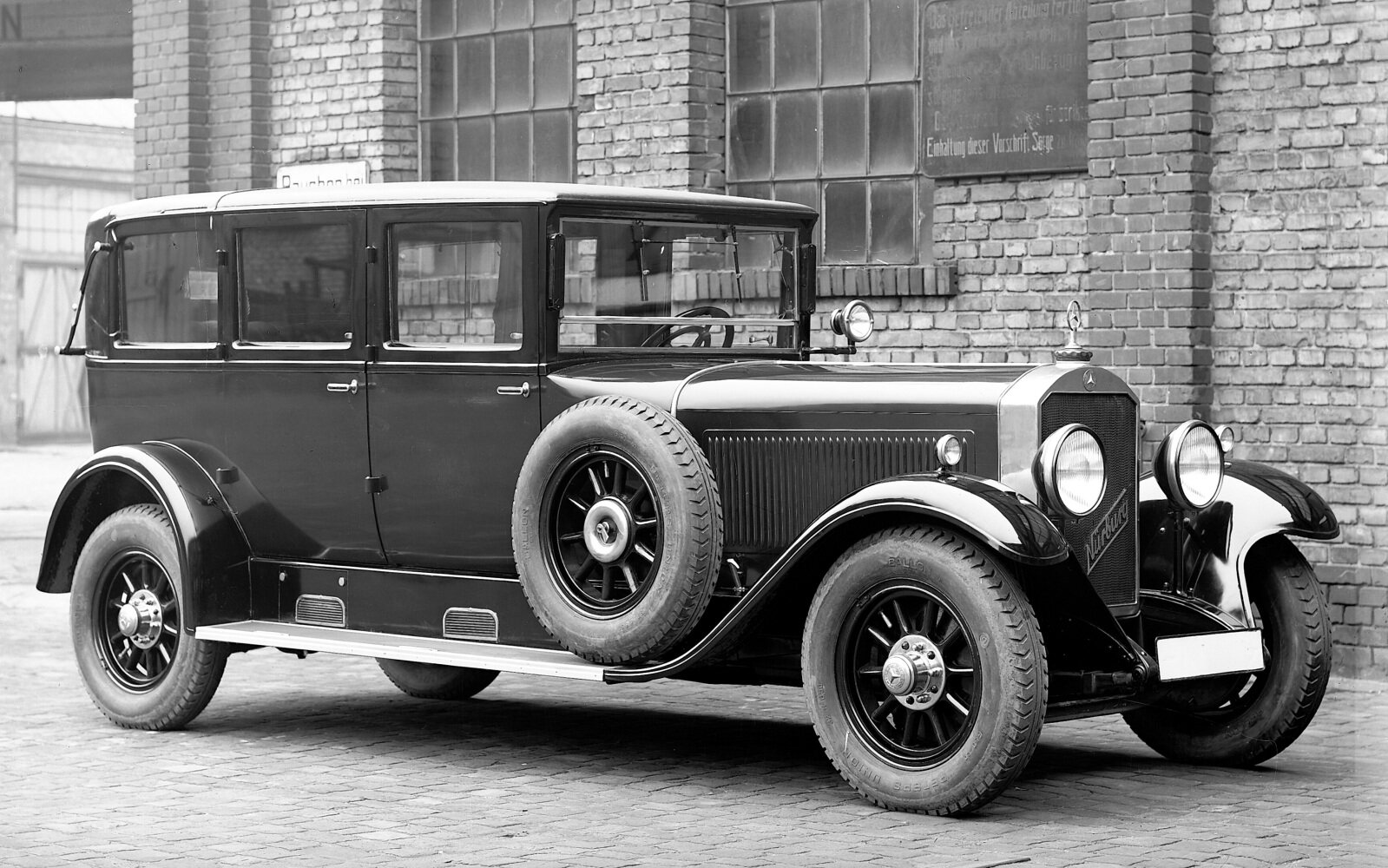 The last cornerstone of the post-merger revamp of the Mercedes-Benz passenger car range was a 4.6-litre eight-cylinder vehicle that had been developed under Ferdinand Porsche and which was called the Nürburg 460. This model owed its name not to any particular sportiness, but to the fact that it had undergone endurance testing on the Nürburgring, where a 460 had covered 20,000 kilometres in 13 days of driving.

Unveiled in October 1928 at the Paris Motor Show, the Nürburg 460 served as a successor to the six-cylinder supercharged 15/70/100 hp, which had been launched four years previously and was to remain in production until February 1929. It was the first series-produced automobile from the world's oldest automobile manufacturer to be powered by an eight-cylinder engine. For this reason, it was also referred to in some publications as the "Nürburg 8", and the cover page of early catalogues was adorned with a gold-embossed 8 inside a lozenge shape.

At its launch, the new luxury-class Mercedes-Benz with its high-frame chassis did indeed look similar to its namesake, the Nürburg: rather old and outdated. At a sales price of RM 20,000 for the pullman saloon, this did not necessarily point to a success story. Ferdinand Porsche's successor, Dr Hans Nibel, who became chief designer at Daimler-Benz AG with effect from 1 January 1929, then proceeded to revise the Nürburg for its second model year. Consequently, as early as autumn 1929, once again at the Paris Motor Show, the public was introduced to a vehicle of considerably greater appeal. Dr. Nibel had replaced the high-frame chassis with a low-frame version. The reduced height having given it a more stretched and elegant look, the vehicle was now every bit the equal of its competitors in terms of external appearance.

Alongside the variant with the standard wheelbase, there was also a short version of the early Nürburg, which was given the additional designation letter "K". In this case, however, the "K" stood not for "Kompressor" (supercharger), but for "kurz" (short). The 460 K had a 240 mm shorter wheelbase and a 50 kg lighter frame. Common to both variants were the 80 hp eight-cylinder in-line engine and four-speed transmission.

The short chassis was used for four-/five-seater bodies, which were available in saloon, open tourer and Convertible D versions. The low-frame variant of the 460 K could additionally be ordered in the form of a special Convertible C "St. Moritz". The melodious name of the winter sports resort in Engadin was bestowed upon this model in early 1930 after it had received the best rating of all entries in a car beauty competition held in that town. The raked windscreen came in for particular praise, the prize list from December 1931 describing the Daimler-Benz entry as the "Special Convertible C "St. Moritz", sloping windscreen". One special version of the Nürburg 460 on the short chassis did not feature in any brochure or price list: a two-seater sports roadster, two examples of which participated in motor sport events in 1929.Rudolf Caracciola and Otto Merz were at the wheels of these unusual sports cars in the International Alpine Rally over a distance of 2660 km and in the 8-hour ADAC long-distance race for non-supercharged touring cars on the Nürburgring.

The standard-wheelbase Nürburg 460 was available as an open tourer and as a pullman saloon, each with six to seven seats. In late 1931, the model range was augmented by a six-/seven-seater Convertible F, although this came not with a Sindelfingen body, but instead with bodies built by the third-party firms of Neuss, Erdmann & Rossi, Voll & Ruhrbeck, Papler and Gläser. In-house bodies for the other variants were produced not just at the Mannheim plant, which built all model variants of the Nürburg, but in some cases also in Sindelfingen. For a handful of VIP customers such as Pope Pius XI, the Nürburg was also fitted with the pullman body of the "Grand Mercedes". As was usual at the time, customers could also purchase a bodyless chassis with a view to having an external coachbuilder fit it with a custom-built body. To this end, the chassis was available in both wheelbase lengths.

A very particular variant of the Nürburg was built in February 1931 - a special armour-plated pullman saloon, which was documented by a series of contemporary archive photographs. The armouring consisted of movable steel plates with which the windows could be protected from the inside. It is not clear from the photographs whether the roof and doors were also armour-plated. The windscreen was protected by a folding steel plate, which, when unfolded, left just a small slit for the driver to see through. As for the passengers, a roof-mounted periscope allowed them to survey their surroundings when the protective plates were deployed. Unfortunately, it is no longer possible to establish under what circumstances or for which customer the vehicle shown in the photographs was produced. However, the fact that it is a right-hand drive version might indicate that this vehicle was delivered to Japan - like two armour-plated "Grand Mercedes" pullman saloons in August 1932 and January 1935.

From February 1931, the Nürburg 460 was optionally available with overdrive. Although this optional extra cost an additional RM 2,000, it included Zeiss headlamps as well as an engine with a larger displacement. The price list from February 1931 stated: "This includes the installation of a somewhat more powerful engine with a cylinder capacity of around five litres. [...] It is expressly pointed out that this option must be ordered simultaneously with the vehicle, as subsequent installation of the more powerful engine is not possible." This was the birth of the Nürburg 500, even though this name was not initially used. Scarcely one year after the launch of the overdrive, the five-litre variant became a separate model, with the price list of December 1931 noting: "As the demand for our "Nürburg" model with overdrive and economy gear has increasingly grown, we have seen it necessary to embark on series production of this model. This vehicle is an example of sheer engineering excellence, furnished with all the achievements of modern automotive technology. Powered by an engine of approximately five litres capacity, this model gives a special élan to our already most highly revered Nürburg. Equipped with an overdrive and economy gear as well as Bosch-Dewandre braking system, this model now attains the highest perfection. This is a first-class vehicle with incomparable road handling characteristics."

Less emphatically, it might equally well have been conceded that market pressure had required a higher-powered addition to the model range. Widening the bore to 82.5 mm increased the displacement to 4.9 litres. In combination with the use of a Solex twin side-draft carburettor, the power output was increased from 80 hp to 100 hp. The standard-installed overdrive could be combined with each of the four forward gears. Externally, there was no difference between the higher-displacement model and the Nürburg 460. The choice of bodies was identical for both variants, apart from the fact that the six-/seven-seater F‑convertibles were initially unavailable for the Nürburg 500. This was to change in September 1932, when this version, albeit with an in-house body, was added to the model range. Costing RM 21,800, it was the most expensive variant of the Nürburg. Likewise from September 1932, the Nürburg 460 was also available with overdrive at an additional price of RM 1,400.

Production of the Nürburg 460 came to an end in December 1933, while the five‑l itre variant was renamed the 500 in February 1934. Some confusion was caused by the fact that, just one month later, the 蛄 with supercharger", today better known as the 500 K, was unveiled. The designations 500 K and 500 N were soon introduced in an effort to distinguish the two five-litre models. The "N" can be interpreted as an abbreviation of "Nürburg" or "Normal" (i.e. without supercharger) and was not used consistently.

On the technical front, there were only minor differences between the Nürburg 500 and the 500 N. More eye-catching was the low-key modernisation of the bodies, which, however, had begun as a continuous process in the final model year of the Nürburg 500. A clearly visible, yet equally subtle innovation was the slightly raked wedge-shaped radiator, which, in the 500 N, replaced the flat radiator grille of its predecessor. The factory-built bodies now also featured at least slightly raked windscreens, which had previously been more or less the preserve of the "St. Moritz" convertible and third-party coachbuilders. Summer 1935 saw the launch of a further revised design, this time with a more pronounced rake of both the windscreen and radiator grille. In mid-1936, a further technical modification was introduced: the compression was raised to increase engine output to 110 hp. Throughout the entire production span, the 500 was available as a pullman saloon and as an open tourer. Originally also available, the Convertible C, D and F models were discontinued one by one at the start of model years 1937, 1938 and 1939.

When the last seven examples of the 500 rolled off the production line in October 1939 after a run of 931 vehicles, this marked a significant watershed in more than one way. After eleven years in production, it was the end of the longest production period for any passenger car series built at Daimler-Benz during the pre-war years. On top of that, the 500 N was also the last Mercedes-Benz passenger car to be equipped with a rigid axle, and the last passenger car worldwide to be supplied with wooden-spoked wheels. Finally, the 500 N brought to an end the historic production of passenger cars at Daimler-Benz's Mannheim plant.