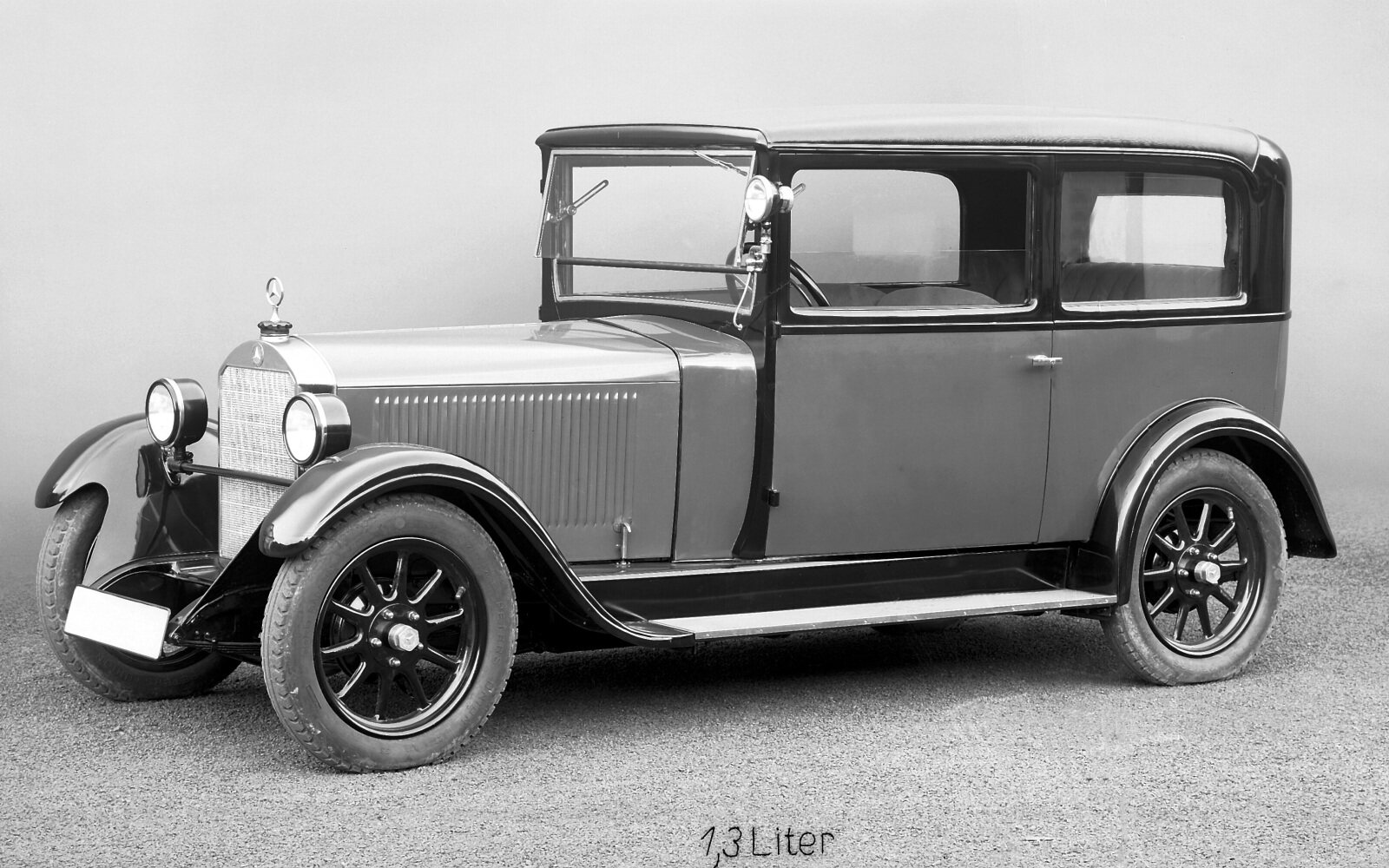 To round off the Mercedes-Benz passenger car range, chief designer Ferdinand Porsche had planned to build a 1.4‑litre car with 25 hp as an entry-level model. According to the system of nomenclature in use at the time, this vehicle would have been given the designation 5/25 hp. Porsche developed the small car along with the new mid-sized models that were unveiled as the 8/38 hp and 12/55 hp in October 1926. When a new system of in-house design codes was introduced at the still young Daimler-Benz AG, the 1.4‑litre project headed the list and was given the designation W 01. The concurrently developed models with displacements of 2.0 and 3.0 litres were called W 02 and W 03.

The 5/25 hp was conceived by Porsche as a rugged everyday vehicle devoid of special technical refinements. Thus, weighing over a tonne, the smallest Mercedes-Benz model came with rigid axles at front and rear as well as a three-speed transmission designed for a top speed of 88 km/h. A notable exception was the engine. Ferdinand Porsche had planned that the small 1.4 litre unit should likewise have six cylinders with a power output of 25 hp. Eight experimental vehicles, photos of which are unfortunately no longer available, were built in 1926. The model never went into series production. With its high production costs, the six-cylinder engine would have pushed the sales price into scarcely realistic territory for a vehicle of this power output class.

Two years later, Dr Ferdinand Porsche made another attempt to introduce a small Mercedes-Benz passenger car into the sales programme. This time, the chief designer had planned a 1.3-litre four-cylinder engine, once again with a power output of 25 hp, but now with a four-speed transmission. Like the six-cylinder prototype of 1926, the new vehicle was given the designation 5/25 hp, its displacement and output being virtually identical. The in-house design code given to the small four-cylinder model was W 14.

With a top speed of 84 km/h, the new 5/25 hp, which would today doubtless be dubbed "Baby Benz", was astonishingly lively. On the chassis front, Ferdinand Porsche's technical layout, with rigid axles at front and rear, continued to be on the conservative side. With 28 experimental vehicles having already been built and satisfactorily proved themselves in a tough day-to-day testing environment, the Board of Management decided to begin production at a rate of 1000 vehicles per month. In view of the general economic situation, however, the required capital investment of around RM 10 million failed to gain the approval of the Supervisory Board. This signalled the end of the road for the hopeful baby Mercedes-Benz.

In September 1935, Hans Gustav Röhr, chief designer at Adlerwerke in Frankfurt am Main until May 1935, was engaged by Dr. Emil Georg von Stauss, then chairman of the Supervisory Board of Daimler-Benz AG, as head of passenger car design. Röhr was joined at Daimler-Benz by, among others, chief engineers Joseph Dauben and Otto J. Winkelmann as well as engine designer Willy Syring.

Röhr set himself the task of modernising the Daimler-Benz range of passenger cars. A key role within that sales programme was played by a new generation of water-cooled, horizontally opposed engines, which Röhr called "system engines". Designed according to the modular construction principle, this range of engines comprised a 1.3-litre four-cylinder unit with 35 hp, a 1.9-litre six-cylinder unit with 50 hp and a 2.6-litre eight-cylinder unit with 70 hp.

Röhr designed the 130 VB (W 144), 190 VB (W 145) and 260 VB (W 146) with front-wheel drive, five-speed transmission and steering column gearshift, while the four-door saloons of this model generation came with pillarless bodies. The new line-up was completed by the 400 V (W 147), a conventionally designed four‑litre model with side-valve V8 engine. In 1936/37, the three models with horizontally opposed engines served as a basis for developing several experimental vehicles, which underwent extensive tests. The 130 VB, of which a total of 18 units were built, was the furthest-advanced of these experimental vehicles.

Following Röhr's sudden death in August 1937, work on these promising projects was stopped. All the experimental vehicles were scrapped.

In the late 1930s, Daimler-Benz worked intently on renewing its range of passenger cars. The various projects that reached the experimental stage between 1938 and 1942 have three things in common. The first is that they share the same engine designer, Wilhelm Syring, who joined the company in September 1935 with Hans Gustav Röhr. The second is the uniform combustion chamber concept with V‑configured overhead valves, and the third is that each of the new models was intended as a replacement for a predecessor that had already attained almost legendary status. What the market wanted in the late 1930s was more modern engines offering higher power output with lower fuel consumption - an issue that has never gone away to this day. Using a modular construction system with as many common components as possible, Wilhelm Syring's goal was to produce his more complex designs at a price no higher than that of the heterogeneous range of engines that had powered the predecessor models.

The 260 (W 159) was powered by a 68 hp six-cylinder engine with a displacement of 2594 cc and cylinder dimensions of 80 x 86 mm. It was conceived as an addition to the sales programme while at the same time superseding the six-seater variant of the old 230 (W 143). For this purpose, two different chassis versions (with wheelbase lengths of 3050 mm and 3450 mm) were under development for 4/5‑seater and 6/7‑seater bodies. Also in the case of this model, the war was to thwart a generation of new vehicles. In an ironic twist of fate, 9,004 units of the M 159 engine were nonetheless produced between 1941 and 1944. They were used in fire-fighting vehicles and bucket seat Kübelwagen based on the 1.5‑tonne L 1500 truck, where they gave outstanding service. There was also a three-litre variant of this engine (bore x stroke 82 x 95 mm) that was specially developed to run on wood gas and which was used in small numbers in the wood gasifier version of the 230 (W 153). After the war, the engine as well as a few body variants of the W 159 served as a springboard for developing the Mercedes-Benz 300, which, launched in 1951, enabled Daimler-Benz to reassert its presence in the top flight of automotive engineering.

The 600 V (W 148) would have been the first Mercedes-Benz series-produced passenger car with a 12-cylinder engine. Its 170 hp V12 powerplant M 148 had a displacement of 6020 cc with cylinder dimensions of 82 x 95 mm. The 600 V was to be positioned in a segment previously covered by the 500 N and the "Grand Mercedes". Eight experimental vehicles were built, and its development was on the verge of completion in 1941. Firm orders had been received for delivery to the German government. However, this development work, too, was to fall victim to the events of the war.

The 600 K (W 157) was planned as the actual successor to the 540 K. The V12 engine from the 600 V was equipped with a supercharger and given the designation M 157. In supercharged mode, the new powerplant was to deliver 240 hp. It was therefore also viewed as a possible alternative to the 7.7-litre eight-cylinder in-line engine in the "Grand Mercedes". Although at least six experimental vehicles were built, this project similarly being very far advanced, the 600 K was to share the same fate as the 600 V.

A further irony of fate was that the V12 engine M 148 underwent an increase in displacement to 6.5 litres and indeed went into series production. However, it was never used in vehicles, serving instead as a "floodlight engine" for powering generator sets for floodlights. An appreciable 3 420 units of this powerful V12 engine were produced between 1938 and 1943, doubtless a higher number than would ever have been built for use just in passenger cars. Or at least that is the conclusion one must arrive at when one recalls that all the eight-cylinder supercharged models on offer from Daimler-Benz in the 1930s reached an aggregate production volume of just 1,119 units.