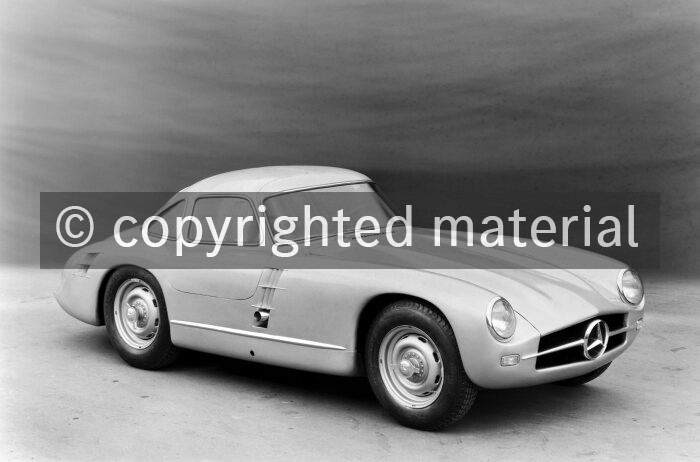 The 300 SL produced in 1953 was a further development of the successful racing sports car of 1952. Its development was based on the decision to participate in sports car racing during the 1953 season after all, contrary to the resolution adopted by the Board of Management in August. Rudolf Uhlenhaut immediately set to work and by 1 December 1952 had already put his thoughts down on paper in a memorandum. The key elements of the specifications included an increase in performance by using direct petrol injection, a reduction in aerodynamic drag by decreasing the track width, an enhanced rear axle and a more balanced weight distribution. Uhlenhaut's concept was enough to win over the chief design engineer Nallinger, who arranged to have 10 vehicles produced, designated with the code W 198.

Uhlenhaut immediately put his theoretical considerations into practice. This led to a fundamentally improved 300 SL, the first experimental version of which was built in the guise of the W 194 with chassis number 11. Also referred to internally as the "plane" on account of its square front section, this car remained a one-off item, however, after the decision was taken at Daimler-Benz to venture into Formula 1 in 1954, a move which resulted in participation in sports car racing during the 1953 season being ruled out due to capacity reasons.

The experimental car was equipped with direct petrol injection, as developed by Hans Scherenberg and Karl-Heinz Göschel, and achieved a power output of 214 hp, a good 40 hp more than the carburettor-equipped version. Other highlights included a single-joint swing axle with low pivot point, used here for the first time, and a transmission flange-mounted to the differential in a transaxle configuration. In conjunction with a shortened 2300 mm wheelbase, these measures produced a balanced axle load distribution and excellent handling characteristics.

Today the W 194/11, which was never used for racing, is one of the showpieces of the vehicle collection at the Mercedes-Benz Museum.