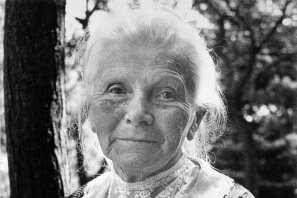 Born as Cäcilie Bertha Ringer on May 3rd, 1849 in Pforzheim.

The invention of the automobile and its success in the early years would be inconceivable without Bertha Benz, Carl Benz's resolute wife. She was born as Bertha Ringer on May 3rd, 1849 in Pforzheim and married Carl Benz on July 20th, 1872 at the age of 23. Without her strong will and unwavering belief in her husband's success, the Benz & Cie. company would probably never have existed.

Bertha Benz gives her husband the support that allows the ingenious inventor and constructor to hold on to the correctness of his life's work in difficult times of severe setbacks and emerging self-doubt. Thanks to her unwavering optimism and the ability to analyze difficult situations carefully, she always finds a way.

During her engagement, when Carl Benz had found himself in an almost hopeless economic situation through his business partner August Ritter, she made a selfless, but existential decision for Carl Benz: Bertha Benz had her dowry paid out early. The sum is just enough to pay off the debts and pay off the business partner, so that, in the future, all decisions can be made by himself.

In his memoirs, Carl Benz later wrote about his marriage to Bertha: "In marrying, I was joined by an idealist who knew what she wanted in all things, from the insignificant to the weighty."

Thanks to Bertha's unshakable trust in her husband and in his invention, Carl Benz continued his work regardless of recurring setbacks. On January 29th, 1886 the time had come: Carl Benz applied for a patent for his three-wheeled "vehicle with gas engine operation".

Bertha Benz played a major role in this success, which is important for mobility as a whole. The patent specification DRP 37435 is now considered the birth certificate of the automobile.

Carl Benz builds further variants of his patent motor vehicle with improved details. But although the public was overwhelmingly enthusiastic about the invention, the hoped-for economic success did not materialize. Benz is again plagued by doubts. And again it is his wife who knows a way out. She recognizes that the public is still suspicious of the functionality and thus also the reliability of the driving machine, which is moved by "mysterious forces". So Bertha Benz took the first advertising tour without further ado.

She boldly takes the steering crank of the “Patent Motor Car” into her own hands. She is convinced that the public should be made aware of the everyday suitability of the motor vehicle in practice. Without her husband's knowledge, Bertha Benz went on an advertising tour in the early hours of the morning in August 1888: she drove the 100 km route from Mannheim to her mother in Pforzheim with her sons Eugen (15) and Richard (14). Her vehicle is model 3 of the “Patent Motorwagen”, equipped with solid wooden spoke wheels and a more powerful engine. After an adventurous journey in which Bertha Benz and her sons' talent for improvisation is in demand several times, the travelers arrive safely in Pforzheim at dusk. With a telegram they let Carl Benz know that the first long-distance journey with his motor vehicle was a success.

The return journey leads five days later via Bretten, Bruchsal and Schwetzingen back to Mannheim. Word of the then sensational event got around in no time and Bertha Benz achieved what she wanted: The critics were at least convinced of the reliability and everyone was talking about the Benz patent motor car.

Without Bertha Benz's commitment and daring, the automobile would certainly not have been successful on its journey into the future.

Carl Benz later wrote in his memoirs: “Only one person stayed next to me in the ship of life in these days when things were about to end. That was my wife. Brave and courageous she hoisted new sails of hope."

Bertha and Carl Benz support the Benz & Cie. Company founded in 1883. with a multitude of new ideas and technical innovations around the automobile. In doing so, they have ensured the company an outstanding position among the automobile manufacturers of their time for many decades. Both experience the merger of Benz & Cie. with Daimler-Motoren-Gesellschaft to form Daimler-Benz AG, which took place in 1926.

On May 5th, 1944, two days after her 95th birthday, Bertha Benz died in Ladenburg, Baden, the family's last residence.