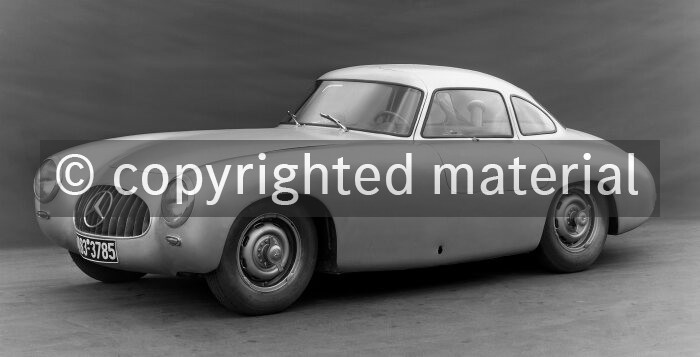 When after the Second World War Mercedes-Benz planned to return to motor sports, this comeback could only be contemplated for sports car races: a new set of rules was announced for Formula One, to come into effect in 1954, and limited resources prevented the development of a Grand Prix vehicle according to the previous formula before then.

The new 300 SL racing sports car (W 194) had to make use of existing components: axles, transmission, and the basic engine were taken from the Mercedes-Benz 300 (W 186) representative saloon. Entirely new was an extremely lightweight yet highly torsionally rigid spaceframe, clad in an elegantly curved, streamlined bodywork made from aluminium-magnesium sheet metal. Since the spaceframe reached quite far up the sides, the W 194 could not be equipped with conventional doors – this was how the racing sports car got its characteristic doors, pivoting from the roof. From 1954, this feature was also adopted by the 300 SL (W 198) series-produced sports car based on the racing car. This was the reason for the nickname given the car in the English-speaking world: the “Gullwing”. The car is powered by an M 194 125 kW (170 hp) in-line six-cylinder engine with a displacement of 2,996 cc. The 300 SL was unveiled in March 1952 and celebrates its première at the Mille Miglia in May 1952.

Among the great successes it enjoyed in its only racing season can be counted its threefold win in the Berne Grand Prix in Switzerland, the spectacular double victories in the 24-hour race of Le Mans (France) and in the Carrera Panamericana in Mexico, as well as the fourfold victory at the “ Nürburgring Jubilee Grand Prix for sports cars”, in which an open-top version of the 300 SL was entered.