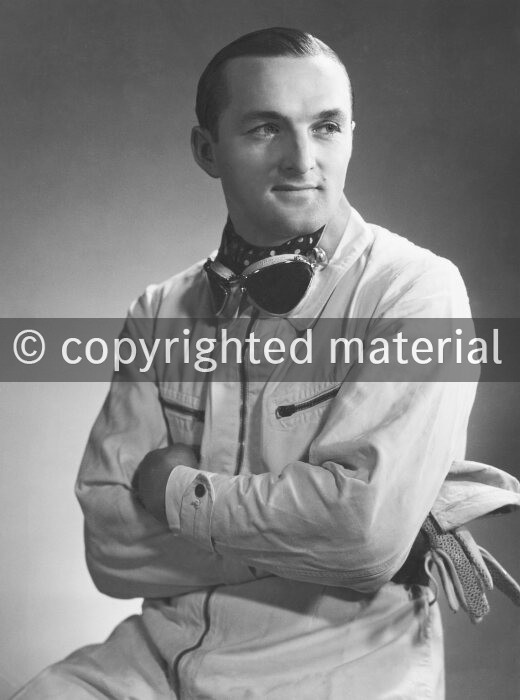 His racing career Hermann Lang, born in Cannstatt 1909, began on a motorcycle. As a mechanic apprentice he won in a competition at Solitude on the old „Norton“ in 1927. As a factory driver of the motorcycle manufacturer “Standard” Lang became sidecar specialist and in 1931 guaranteed victories for himself in different leading German mountain racing championships for sidecars.

In 1933 Hermann Lang got a position of a mechanic in racing and test department of Daimler-Benz AG. Occasionally during warm-up driving on one of the 750kg-Formula car, his driving talent was promptly discovered and he was allowed to take part in a test drive for young professional racing drivers. In 1935 Hermann Lang started for the first time as a racing driver on Mercedes-Benz at international Eifel Race and reached 5th place. Great success came in 1937 with the victory at the two fastest racing in the world – Grand Prix of Tripoli as well as Avus Racing. In the racing season 1938 with continued success in Tripolis as well as 1st place at Coppa Ciano Lang was able to build further his position at Mercedes-Racing department as a triumphing driver. Together with Manfred von Brauchitsch and Rudolf Caracciola he built competitor frightening driver-trio on the Mercedes Silver Arrow. In 1939 he won in a row and with a long distance records Grand Prix of Pau und Tripolis, the Internatnional Eifel Race and Vienne High Road Racing. At the Grand Prix of Belgium, Mountain Grand Prix of Germany as well as Grand Prix of Switzerland he leaded as a winner, which guaranteed him the title of mountain racing and Europe champion of the year 1939. Lang continued his racing driver career also after the end of the war. At the first serious after war racing Hermann Lang was again on the start and triumphed at Ruhestein on 328th Mille-Miglia-BMW. After comeback of Daimler-Benz AG to motor sports, after 12 years racing break, in 1951 Hermann Lang took 2nd and 3rd places at Argentinian Spring Race. With the 300 SL (W 194) Lang celebrated long anticipated comeback. In Bern 1952, being still the second after Karl Kling, Hermann Lang together with Fritz Ries became overall winner at 24-hours of Le Mans. After Grand Prix of Europe in August 1954 Lang stepped back from racing sports, but he still worked as client service inspector for Daimler-Benz until his retirement. He died on 19.10.1987 in his swabian hometown Bad Cannstatt.