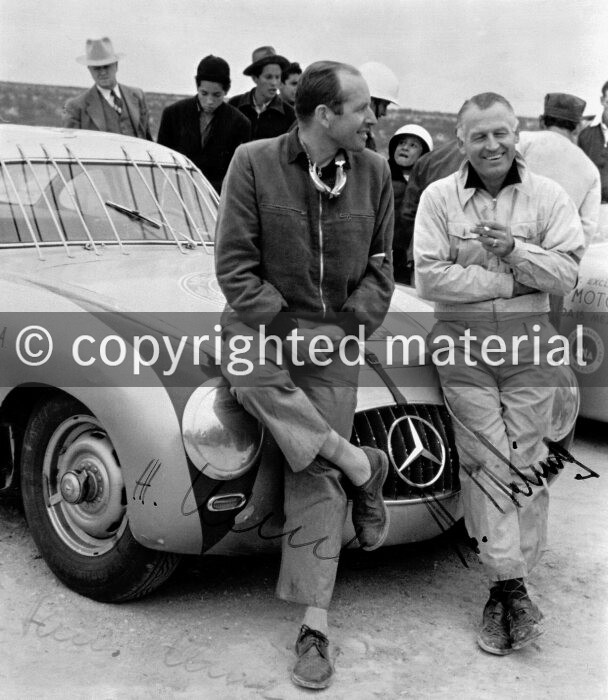 Hans Klenk was born on 18th October 1919 in Künzelsau, Hohenlohe and, being eleven years old, started gliding in his hometown Schwäbisch-Hall-Hessental. A personal contact with well-known plane engine constructor Willy Messerschmitt kept Klenk away from the dream job as a surgeon and he began to study aircraft and motor mechanics in Munich. During the war Hans Klenk was a fighter pilot on the Messerschmidt Bf 109 and was located in Schleswig-Holstein and Italy. In the early 1950s he opened his own engineering company and built sports cars in small series with BMW-components. Since spring 1951 he started successfully on his Meteor sports car at the national formula circuit racing, so that in 1952 he was allowed to drive for Mercedes-Benz one of the three sports racing cars 300 SL (W 194) at the 24-hours of Le Mans. Though the car of Karl Kling and Hans Klenk with the starting number 22 was out of competition because of some lighting generator damages, the racing brought double victory to Mercedes.

At the long distance racing in year 1952, at Mille Miglia in Italy and at Carrera Panamericana in Mexico, Klenk took part as a co-driver of Mercedes driver Karl Kling. New double victory of Mercedes was not least influenced by Hans Klenk´s invention of “ long distance book” or “prayer book”. He drove meticulously the 3200 km route beforehand and noted the danger spots according to his car´s mileage in order to inform the driver during racing.

One accident during a training session on the Nürburgring ended Klenk´s racing career in Juli 1953. Hardly escaping the death, he had such a severe walking disability that he had to look for career alternatives. He was first a racing manager at Continental Gummiwerken Hannover and PR manager until his retirement.