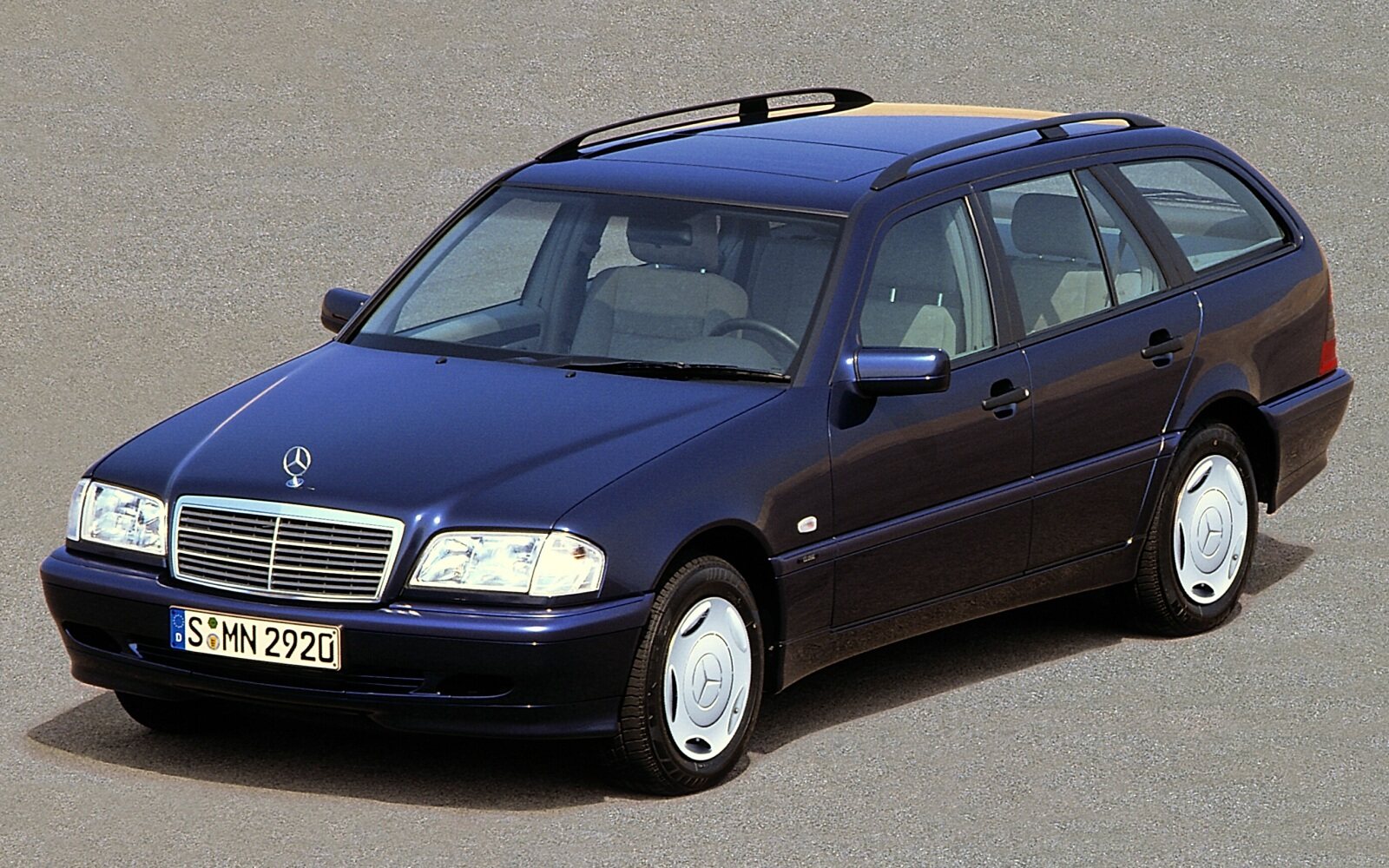 In June 1997 alongside the saloons, Mercedes‑Benz also unveiled the C‑Class Estates with a revised design, enhanced standard equipment and advanced technology. The improved specification delivered significant benefits in terms of safety and comfort across all four lines. Sales prices, however, remained unchanged in line with the company's value for money strategy.

The facelift focused on deploying two new V6 engines with displacements of 2.4 and 2.8 litres, thus adding two six-cylinder models to the portfolio. For domestic German sales, the 125 kW (170 hp) C 240 succeeded the four-cylinder C 230 model and gave Mercedes customers affordable access to the six-cylinder class. When it came to exports and the delivery of components to assembly plants outside Germany (CKD, completely knocked down), the C 230 continued to be produced until June 1998. The 2.8‑litre unit which gave its debut in the E‑Class in March 1997 now became available for the C‑Class too.

Both V6 engines were produced in the advanced, newly constructed engine plant in Bad Cannstatt and featured a range of groundbreaking innovations. An intelligent selection of lightweight materials achieved considerable reductions in weight. The light-alloy cylinder liners used for the first time anywhere in the world helped to reduce fuel consumption due to their exceptionally low-friction surface. Deploying three-valve technology and dual ignition significantly reduced emissions. Dispensing with an exhaust valve reduced heat loss in the exhaust gas flow while at the same time creating enough space for a second spark plug. This was beneficial in terms of faster flame propagation and optimising combustion control.

There was another engine variant besides the two V6 models which also enhanced the C‑Class Estate portfolio: the C 230 KOMPRESSOR available from June 1997. This contained the supercharged engine known from the saloon.

As well as discreet stylistic retouching on the bodywork and interior fittings, the facelift included a considerable enhancement of the standard equipment. Examples were sidebags in the front doors, high-performance emergency tensioning retractors with belt force limiters for the front seats and the electronic BAS (Brake Assist System). All facelifted C‑Class Estates excluding the entry-level C 220 Diesel and C 180 models were equipped with acceleration skid control as standard.

Also new for the C‑Class was the Mercedes‑Benz drive authorisation system ELCODE for enhanced anti-theft protection and convenience. This was operated using the electronic key for the doors and ignition. Another new addition was the Active Service System ASSYST to adjust service intervals as necessary to suit actual operating conditions, thereby extending intervals from 15,000 kilometres to an average of 22,500 kilometres.

Besides the improved standard equipment, a host of optional extras became available for the C‑C lass for the first time in June 1997. Examples included the electronic parking aid PTS (Parktronic System) and the destination-finding system APS (Auto Pilot System), variable cruise control (in conjunction with automatic transmissions only), a rain sensor for the windscreen wipers and xenon headlamps with dynamic range control.

Mercedes‑Benz presented two more C‑Class Estates at the Frankfurt International Motor Show in September 1997. The C 43 AMG was the first exceptionally high-performance "T version" in model series 202. This was a top model thanks to its newly developed 225 kW (306 hp) 4.3‑litre V8 engine featuring three-valve technology and dual ignition. It also came with comprehensive standard equipment such as an automatic transmission, automatic climate control and the Electronic Stability Program ESP®.

Although the second new model was at the opposite end of the performance spectrum, its debut was no less spectacular. Like the corresponding saloon, the C 220 CDI – still known as the C 220 Turbodiesel when presented at Frankfurt – was the world's first series production car to have a direct-injection diesel engine based on common rail technology. Its 92 kW (125 hp) OM 611 four-cylinder engine developed a respectable torque of 300 newton metres from as low as 1800 rpm. Not only was the C 220 CDI the diesel car with the highest torque in its displacement category, it also set new standards in fuel consumption and emissions.

The chief reason for this was the new common rail system developed jointly with Bosch, which had key differences from other direct injection systems. Whereas conventional systems generate the pressure for each injection process as a separate operation, CDI engines use a "common rail" in which the pressure is stored and distributed to the injection nozzles via solenoid valves. Availability of high injection pressure of up to 1350 bar from low engine speeds and also variable injection control resulted in a much improved mixture formation process and therefore lower fuel consumption and exhaust gas emissions. The C 220 CDI Estate was launched onto the market in December 1997 at the same time as the saloon.

Another CDI model joined the C‑C lass diesel range in June 1998: for both the saloon and estate, the C 200 CDI replaced the existing C 220 Diesel which was powered by a naturally aspirated engine with prechamber combustion. The new model was equipped with a derated version of the engine used in the C 220 CDI with the same displacement. In particular, this new model distinguished itself from its predecessor due to its high torque in the lower engine speed range, significantly improved performance and lower fuel consumption and emission figures. Following the launch of the C 200 CDI, both the saloon and estate versions of the previous C 220 Diesel became available as a taxi variant with derated engine (55 kW or 75 hp) for use with biodiesel only. Production of the C 200 Diesel export model was also discontinued at this time.

In August 1999 the Electronic Stability Program ESP® became standard equipment for all C‑Class models. Unveiled as a world first four years before, this driving safety system was thus standard equipment on all Mercedes‑Benz passenger car models except the G‑C lass, the V‑Class and the ML 230.

When the new C‑Class Saloons were launched in May 2000, modifications to the engine line-up also came into effect for the estate vehicles of model series 202: all petrol engines were combined with a new, six-speed manual transmission characterised by low gearshift forces and fast shift travel which was likewise used for the saloons of model series 203. Fitted with an automatic transmission as standard, the C 43 AMG was an exception. Production of the most powerful estate ended in July 2000. This was because the 4.3-litre engine for the C‑Class of model series 203 was no longer in use – the saloons of this successor generation to model series 202 were presented in March 2000 and launched onto the market in May.

Coinciding with the C‑Class Saloons, E‑Class Saloons and Estates, and CLK Coupés and Convertibles, in May 2000 the estates of model series 202 also received new, four-cylinder engines and a V6 engine with a displacement of 2.6 litres and higher torque. The more advanced four-cylinder engines of the M 111 EVO series comprised three variants with displacements of 2.0 litres and 2.3 litres, with the two 2.0-litre engines being used in the C‑ Class. The 2.3‑litre engine was reserved for the SLK, which had the new four-cylinder engine from January, and the CLK models.

The 2.0‑litre naturally aspirated engine of the revised engine generation was distinguished by a range of technical modifications which, first and foremost, improved torque, quiet running and driving dynamics. In the C 180, it replaced the previous 1.8‑litre unit with ten percent higher torque and delivering output of 95 kW (129 hp), an increase of 3 kW (4 hp).

The newly developed two-litre engine with mechanical supercharging, which replaced the naturally aspirated engine in the C 200, output 120 kW (163 hp) with the maximum torque of 230 newton metres which was available from 2500 rpm and remained constant until 4800 rpm. As a result, the new C 200 KOMPRESSOR achieved significantly improved performance compared to the previous C 200 while keeping fuel consumption the same. When the new C 200 KOMPRESSOR Estate was launched, both the C 230 KOMPRESSOR and the existing C 200 KOMPRESSOR export model fitted with the original engine design were discontinued.

A modified V6 unit was also used at the same time as the four-cylinder M 111 EVO engines. With displacement increased from 2.4 to 2.6 litres but with no change in output, this resulted in roughly a seven percent rise in torque. This made the estate (still designated the C 240) even more agile and powerful at low revs than before.

Despite these improvements, the revised estates were not built for long because the next-generation model series S 203 was unveiled in January 2001. That same month, the final estates of model series S 202 rolled off the production line at the Bremen plant. A total of 243,871 units were manufactured within approximately five production years. Like for the saloons, the undisputed top seller was the entry-level C 180 model which sold 69,242 estates.

Do you want to set this media object as main picture?
A97F1356 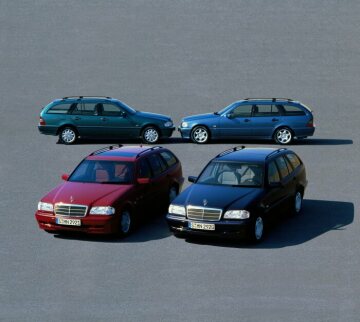 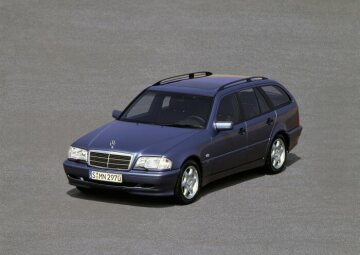 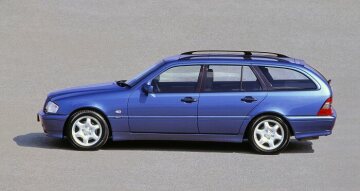 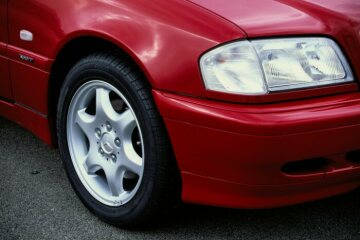 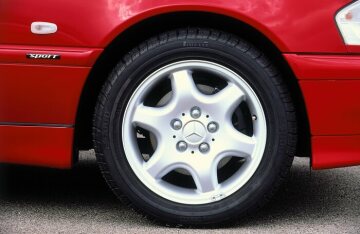 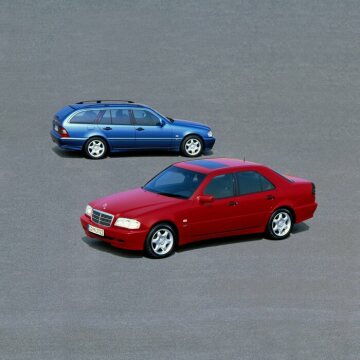 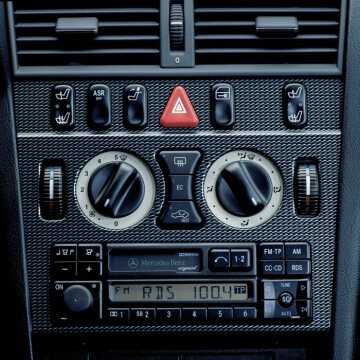 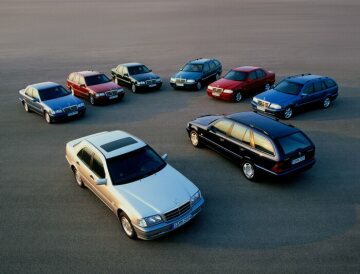 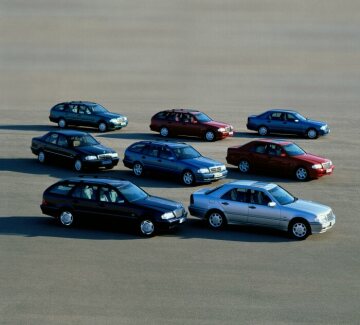 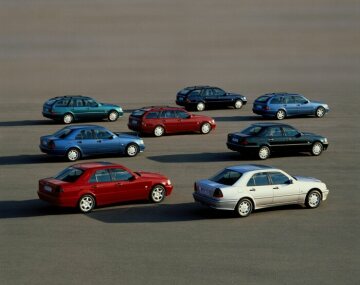 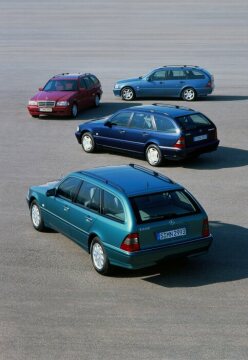 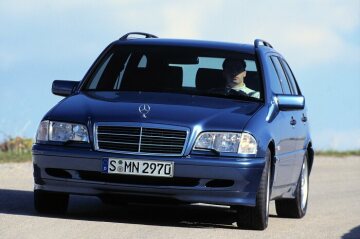 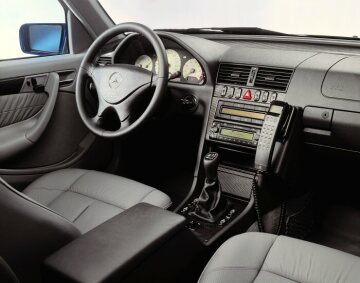 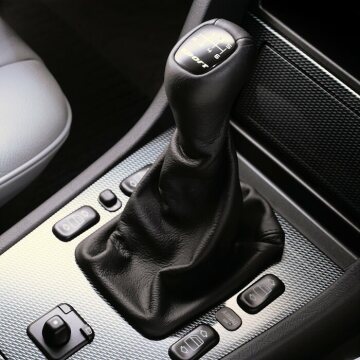 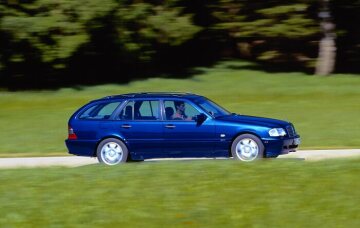 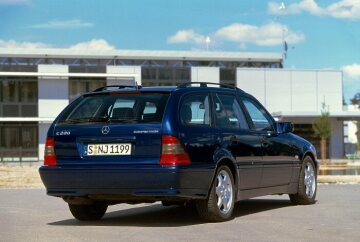