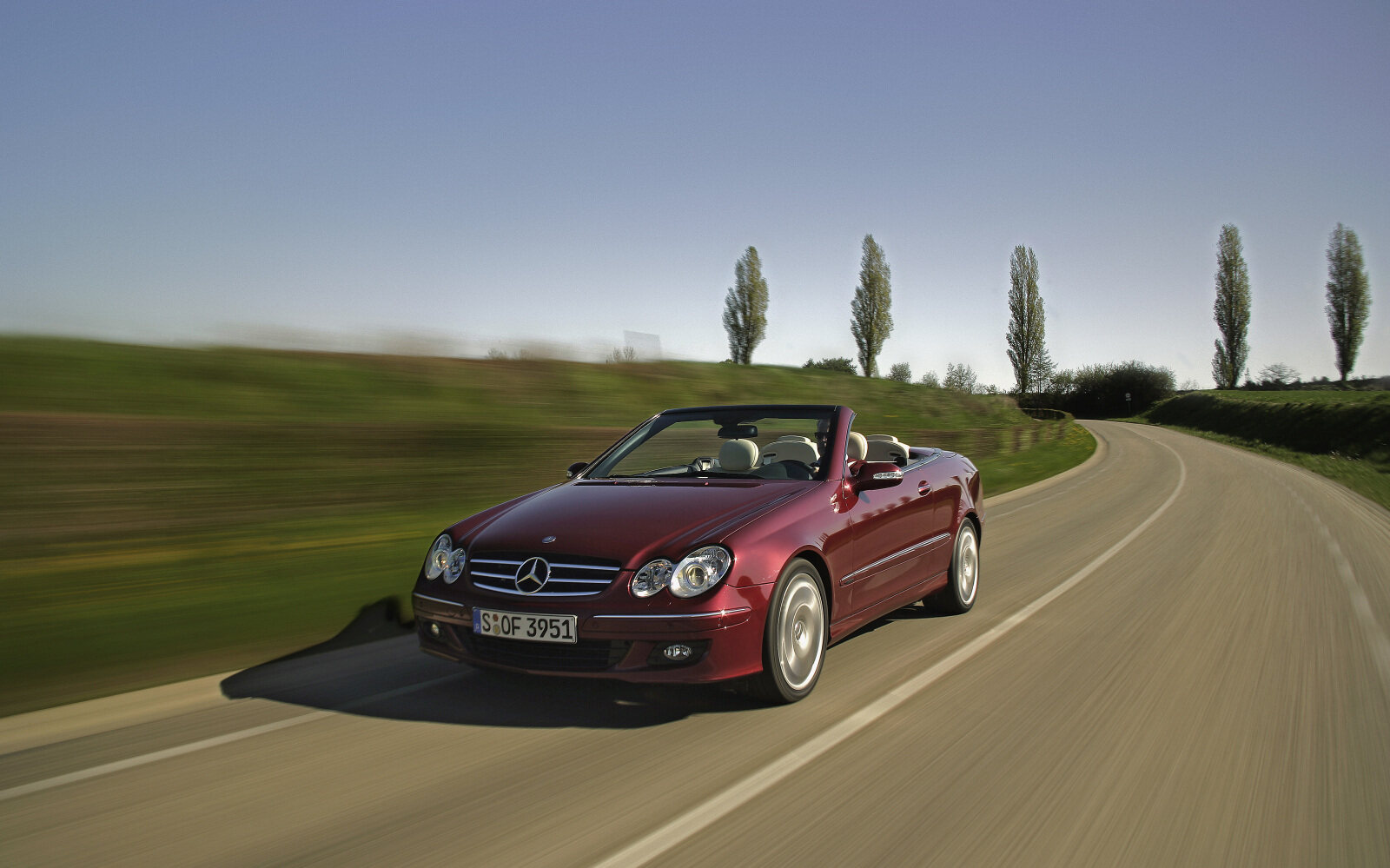 In the early summer of 2005 Mercedes-Benz put the second generation of the CLK-Class through a comprehensive model refinement. To begin with, three newly developed six-cylinder engines made the convertible even more powerful and sportier: the new CLK 350 with standard-fit seven-speed automatic transmission (200 kW/272 hp) replaced the previous CLK 320, exceeding it in power by 25 per cent and in torque by about 13 per cent. New was also the CLK 280, whose 170-kW (231-hp) V6 engine had even 36 per cent more power compared with the preceding CLK 240 and an increase in torque by 25 per cent.

Diesel fans could now select a compression-ignition engine for the CLK Convertible. The new CLK 320 CDI with state-of-the-art diesel direct-injection engine was impressive both in output (165 kW/224 hp) and torque (510 newton metres with 7G‑TRONIC). In Germany, the Netherlands, Austria and Switzerland Mercedes‑Benz fitted the diesel models of the CLK-Class with particulate filters as a standard feature.

As of June 2005 Mercedes‑Benz upgraded the comprehensive standard safety equipment of all CLK models with newly developed, crash-responsive NECK-PRO head restraints. They optimised protection of the driver and front passenger in a rear-end collision: if the sensor system detected a rear-end collision with a defined severity of impact, it released pre-compressed springs inside the head restraints that in a fraction of a second moved the head restraints forwards by about 40 millimetres and upwards by 30 millimetres, in order to support the front seat passengers' heads in due time. The front seat passengers' heads were then duly supported and the risk of whiplash injuries reduced. After a NECK-PRO deployment the head restraints could be unlocked using a supplied tool and manually pushed back into their original positions. Effectively immediately, the automatic tyre pressure loss warning system and ISOFIX child seat attachments were also standard on the CLK. Bi-xenon headlamps with active curve lights were optionally available.

The CLK Convertible's appearance also indicated its increase in power after the comprehensive model refinement: the newly designed front bumper with distinctive V-shape and larger air inlets as well as the modified radiator grille with three (instead of the previously four) louvres added up to a more dominant look. The characters of the two equipment lines were now also more clearly highlighted: In the ELEGANCE model the louvres of the radiator grille were silver-coloured, and black in the AVANTGARDE line.

Mercedes‑Benz consistently extended this differentiation to the side view. For example, the CLK-Class in the AVANTGARDE line now had silver-coloured 17-inch light-alloy wheels with a five‑double-spoke design as a standard feature, while the ELEGANCE line was distinguished by nine‑spoke light-alloy wheels (16 inches) painted sterling silver. Newly designed brilliant-finish tail lamps with more pronounced horizontal structure supported the powerful design idiom of the CLK-Class. In the AVANTGARDE line the cover plates were dark-tinted.

With their great love of detail, Mercedes‑Benz designers had upgraded the interior of the CLK-Class and attended to even greater expression of the individuality of the lines. For example, new black seat covers made from a combination of ARTICO man-made leather and fabric were standard on the models of the AVANTGARDE line. Alternatively a new leather interior was available, with seats, door centre panels and rear side elements appearing in a contrasting colour. Available were basalt grey, pebble beige, tundra brown, flamenco red and cappuccino brown. Instead of the standard aluminium trim, a black ash wood trim was also possible in the AVANTGARDE line. The roof liner of the AVANTGARDE line appeared in black. Also new was the instrument cluster of this equipment line. It was distinguished by a front cover of matte aluminium, white dials with special lettering and chrome rings on the round gauges.

The colour and material concept of the ELEGANCE line was also upgraded all round. A new fabric design in black or basalt grey, optionally a new leather interior in black, basalt grey or pebble beige, and new dark ash wood trim underscored the restrained elegance of the interior. For both lines the leather interior received a new grain with a higher-quality, softer character.

Mercedes‑Benz accommodated the desire of many customers for a sportier touch with two new equipment packages. They included not only visual equipment features but also technical modifications for even more vehicle dynamics. That's why the Sports package offered, besides 18-inch light-alloy wheels with a multi-spoke design, wide-base tyres at the front of size 225/40 R 18 and 255/35 R 18 at the rear, chrome-plated exhaust tips and an exhaust system with a special sporty sound for the four and six-cylinder petrol models, also cross-drilled brake discs, brake callipers with Mercedes-Benz lettering and a sports suspension including a body lowered by 15 millimetres, among other items. In the interior there were multicontour seats in front for even better lateral support, steering-wheel shift buttons (with automatic transmission equipment), sport pedals with an aluminium look and velour floor mats with silver-coloured edging.

On choosing the AMG Sports package, customers received additional features like AMG bodystyling with newly designed front apron, the AMG spoiler lip on the boot lid, the chrome-plated AMG exhaust dual tailpipe and floor mats with stitched AMG logo. Another special feature of the AMG Sports package was 18-inch light-alloy wheels painted sterling silver with a five-spoke design. The tyre sizes were 225/40 R 18 at the front and 255/35 R 18 at the rear.

The 2006 Geneva Motor Show witnessed the première of the exclusive high-performance CLK 63 AMG Convertible, which thanks to its powerful 8-cylinder engine and elaborate suspension technology offered an especially fascinating driving experience. Under the bonnet of the CLK 63 AMG operated the AMG 6.3‑litre V8 engine: with a peak power output of 354 kW (481 hp) and a maximum torque of 630 newton metres, the CLK 63 AMG provided more power and torque than any other vehicle in this segment. A perfect companion to the dynamic power development was the AMG SPEEDSHIFT 7G‑TRONIC.

A new front apron with more distinctive contours and side air outlets signalled the dynamic AMG bodystyling and underscored the CLK 63 AMG as a sporty top model combining dynamics and exclusivity. These properties were also reflected in by the interior by a new ergonomic AMG sports steering wheel, AMG sports seats with multicontour function and exclusive nappa leather upholstery.

The Sport Edition of the CLK-Class Convertible, available from April 2007, made a new splash with its sporty look and outstanding equipment. Especially impressive were the 18-inch wheels with an exclusive six‑d ouble-spoke design (225/40 R 18 at the front, 255/35 R 18 at the rear), and AMG bodystyling elements. Inside, the ergonomic AMG sports steering wheel with its excellent grip, sport pedals with an aluminium look and special velour floor mats especially shaped the sporty and exclusive ambience.

The design of the special model also included a front apron with distinctive contours as well as a rear apron and side sill panels characteristic of AMG models. In addition, the front axle had cross-drilled brake discs. The brake callipers of the Sport Edition models bore 'Mercedes‑B enz' lettering.

The basis of the Sport Edition was the previous sporty, high-quality AVANTGARDE equipment line. The interior of automatic transmission vehicles featured an AMG sports steering wheel with perforated leather in the grip areas and steering-wheel shift paddles for an even sportier flair. Depending on the engine version, a further technical highlight was available - the 7G‑TRONIC Sport seven-speed automatic transmission with shift times shortened by up to 30 per cent.

The sporty ambience underscored a black upholstery combination in high-quality ARTICO man-made leather, combined with fabric. A black leather interior was optionally available. Striking were also the sports pedals with an aluminium look and studs for a good grip as well as velour floor mats with silver-coloured looped edging. The Mercedes‑Benz Sport Edition special CLK models were available as convertibles in six powerful engine variants, qualifying as the most economical models of their category.

The customer delivery of the 300,000th vehicle of the CLK-Class on 30 May 2007 marked an important milestone for the successful second generation of this 209 model series. Since the world première in May 2002, over 200,000 CLK coupés and 100,000 CLK Convertibles (from May 2003) had been delivered. The milestone car was a CLK 200 KOMPRESSOR Convertible. The outstandingly smooth running characteristics of the dynamic V6 engine in the CLK 350 with standard-fit seven-speed automatic transmission had so far enthused around 40 per cent of the convertible buyers. Especially popular was the CLK Convertible in Germany, the US and the United Kingdom.

The CLK Convertible of the second generation, initially manufactured as of 2003 for one year at Karmann in Osnabrück, rolled off the assembly line in Bremen as of 2004  - the centre of competence for open-top vehicles

Do you want to set this media object as main picture?
PRMIT24302 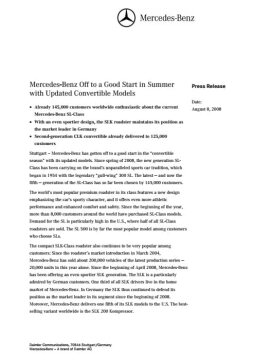 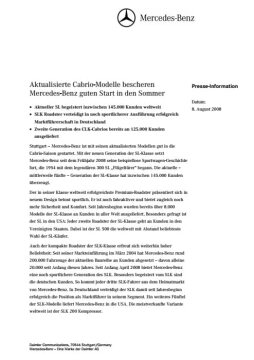