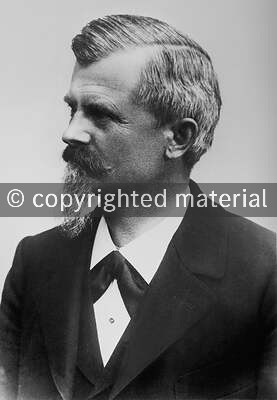 Wilhelm Maybach, the son of a master joiner, was born on February 9th 1846 in Heilbronn and christened August Wilhelm. The family, with five sons, moved to Stuttgart after the father was forced to give up his joiner's workshop. Both parents died three years apart and Wilhelm Maybach was an orphan by the age of ten.

A notice published by friends of the family in the Stuttgarter Anzeiger in 1856 prompted the Reutlingen Bruderhaus, a Christian social institution, to take him in. The same institution also provided schooling for Wilhelm Maybach. Gustav Werner, founder and head of the Bruderhaus, recognised Maybach's technical talent early on and encouraged him. In addition to beginning an apprenticeship in the design office of the organisation's engineering works in 1861, the orphan was taught English, French and mathematical and scientific subjects.

In 1864, some time after Gottlieb Daimler came to Reutlingen, he and Maybach became acquainted. Maybach was a pupil in a Pietist welfare institution and Daimler a worldly engineer who had been given the task of restructuring the engineering works of the Bruderhaus. Despite their shared appreciation of all things technical, there was no denying that these were two fundamentally different individuals. Nevertheless, they were to enjoy a successful working relationship founded on mutual respect and loyalty which lasted decades. Wilhelm Maybach was to accompany Gottlieb Daimler from this point on and remained closely linked with him until Daimler's death on March 6th 1900.

In September 1869 Maybach went with Daimler to Karlsruhe and in 1872 to Deutz, near Cologne. At Gasmotoren-Fabrik Deutz AG he started out as a draughtsman in July 1872 and was appointed chief engineer in January 1873. From a very early stage Wilhelm Maybach and Gottlieb Daimler reflected on the universal applications for a light, high-speed internal combustion engine – in the mechanisation of craft-based industries, for example. Maybach's trip to the World Exposition in Philadelphia in 1876 may have both encouraged this vision and confirmed it, for during a visit to the new William Steinway factory he had an opportunity to study the US approach to production technology based on the division of labour and mechanisation.

On September 5th 1878, Maybach married Bertha Pauline Habermaas, a friend of Emma Daimler's from Maulbronn, whom he had met at Daimler's wedding. Their first son Karl was born in Deutz in 1879.

When Daimler left Gasmotoren-Fabrik Deutz in a dispute, Wilhelm Maybach followed him to Cannstatt in October 1882 to develop the light, high-speed engine there. This town near Stuttgart was where Wilhelm Maybach was to work for the next 25 years. His son Adolf and daughter Emma were also born there in 1884 and 1892 respectively.

In April 1882 Daimler concluded a contract with Wilhelm Maybach, which specified that the latter was to take up a "position as engineer and designer responsible for the development and realisation of various mechanical engineering projects" for a basic annual salary of 3600 Marks. To ensure his long-term collaboration, Daimler offered Maybach a 30,000-Mark share of the business, "to link permanently the interests of Mr Maybach with those of Mr Daimler".

During his extensive research work, Wilhelm Maybach discovered a patent by an Englishman named Watson, which referred to the possibility of an unregulated hot-tube ignition system – an important requirement for attaining higher engine speeds, without which a light and powerful engine could not be realised. The horizontal test engine of 1883 was followed by the "grandfather clock", an engine with a vertical cylinder that was particularly light and compact and therefore also suitable for installation in vehicles. The new engine was first fitted in a wooden two-wheeler in 1885 before being installed in a carriage the following year. However, Maybach quickly realised that it would not be enough simply to produce engines for carriages.

He thought further and, in the motorised quadricycle, developed the first motor car of completely independent design to come out of Daimler's workshops. On account of its steel spokes the four-wheeled vehicle was also called the "wire-wheel car". Its drive was the first two-cylinder petrol engine based on the "grandfather clock" and designed as a V-engine. Maybach can also be credited with introducing toothed gear transmission to automotive design in this vehicle.

Presented at the Paris World Exposition in 1889, Maybach's design was also instrumental in bringing about the emergence of the French motor vehicle industry. The firm Panhard & Levassor began producing the two-cylinder V-engine under licence in autumn 1889 and from March 1890 also supplied these Daimler-licence engines to Peugeot, a renowned manufacturer of tools, machines, household appliances and bicycles. The long-established French company mounted the two-cylinder unit in a motorized carriage based on the "wire-wheel car" and in so doing became an automotive manufacturer. In 1981 Panhard & Levassor also began using the "Système Daimler" engine for its own vehicles and so became the second French manufacturer of petrol automobiles after Peugeot.

When Daimler set up Daimler-Motoren-Gesellschaft (DMG) in November 1890 with Max Duttenhofer and Wilhelm Lorenz, Wilhelm Maybach was to become chief engineer. But he left DMG in February 1891owing to unsatisfactory contract terms.

What then followed was an astonishing stopgap solution: Maybach continued to work secretly for – but not with – Daimler, who remained with the investors at DMG, despite continuing conflicts. A design office was set up at Maybach's private residence in Cannstatt, where Maybach worked purposefully to advance automobility. In autumn 1892 Maybach, funded by Daimler, rented the ballroom of the former Hotel Hermann in Cannstatt. There, with a small team he developed such important designs as the belt drive, the "Phoenix" engine and the spray jet carburettor, which was to be used for decades in the automobile industry.

The insistence of the British industrialist Frederick R. Simms, who concluded a major licence agreement with DMG, made it possible for Gottlieb Daimler and Wilhelm Maybach to return to DMG in November 1895. Maybach was appointed Technical Director on November 8th 1895 and received shares worth 30,000 Marks, to which he was entitled under the 1882 contract with Daimler. The foremost concern for Maybach was now to restore the competitiveness of DMG with technically advanced and reliable products. This marked the beginning of extensive development activities, and the designs thought out at the Hotel Hermann were able to be put into series production. The most important result was the so-called belt-driven car, the first automobile manufactured by DMG in appreciable numbers. It was equipped with the two-cylinder Phoenix engine and a belt drive. Maybach developed the tubular radiator with fan in 1897 and improved it in 1900 with the honeycomb radiator design. These efficient radiator systems enabled the first closed cooling circuits and therefore more powerful, more reliable vehicles.

His untimely death prevented Gottlieb Daimler from witnessing one of Maybach's most outstanding designs for the joint company: the first Mercedes, which caused a sensation at Nice Race Week in March 1901. It was a light and powerful vehicle with a low centre of gravity, distinctly different from all previously built vehicles. The 35 hp Mercedes gave the automobile a form of its own and put an end to the carriage era in motor vehicle manufacture. This seminal design, regarded as the first modern automobile, owed its creation not only to the design engineering genius of Wilhelm Maybach, but also to the initiative of Emil Jellinek. This businessman and automotive enthusiast with residences in Baden, near Vienna, and Nice, bought his first Daimler car in 1897 and thereafter demanded ever more powerful and faster vehicles from Maybach and DMG.

With spectacular race victories and equally impressive sales successes, the Mercedes rang in a new era and brought DMG an unexpected boom. Its creator, respectfully called "roi des constructeurs" (king of design engineers) in France, nevertheless did not get the appreciation due to him and became a victim of intrigues. After the death of Supervisory Board Chairman Max von Duttenhofer in August 1903, his position was undermined step by step: Maybach was relieved of his duties as Technical Director and restricted in his activities to an "inventor's office" away from direct product development. An embittered Maybach finally left DMG in April 1907.

A year and a half later an accident was to trigger the start of something new. On August 5th 1908, the Zeppelin LZ 4 airship was destroyed when attempting to land in strong gusting winds at Echterdingen near Stuttgart. The entire nation donated money to enable Count Ferdinand von Zeppelin to build a new airship, and Wilhelm Maybach proffered his contribution to the "national cause": he suggested to the Count the use of a new improved airship engine designed by his son Karl.

Count Zeppelin thought this a marvellous idea, and on March 23rd 1909 Luftfahrzeug-Motorenbau-GmbH with its main office in Bissingen, near Ludwigsburg, was set up with the participation of Luftschiffbau Zeppelin GmbH, Friedrichshafen. The technical director was Karl Maybach, who was outstandingly qualified for the post thanks to his very close working relationship with his father and through his time at DMG. On June 26th 1911, the Zeppelin LZ 10 Schwaben took off with three new Maybach engines on its maiden flight. In February 1912, renamed "Motorenbau GmbH", the company relocated to Friedrichshafen on Lake Constance, where Luftschiffbau Zeppelin GmbH was also headquartered.

In 1918 the company was renamed "Maybach-Motorenbau GmbH". The Treaty of Versailles prohibited the production of airships and aircraft in Germany, so Maybach turned to motor vehicle manufacture. The 22/70 hp Maybach (W 3) debuted at the Berlin Motor Show in September 1921 and went on to enter series production in Friedrichshafen in 1922. This first Maybach car was followed by more powerful, more luxurious models. One of the first highlights was the development of the Maybach 12 model of 1929. It was the first production car to feature a V12 engine and was regarded as the German counterpart to the Rolls-Royce. Wilhelm Maybach lived to see the presentation of this landmark car, which had been designed by his son.

For his life's work the "king of design engineers" received a number of distinctions: in 1915 the King of Württemberg conferred on him the title "Royal Chief Engineer", and one year later the Technical University of Stuttgart awarded him an honorary doctorate. Finally, in 1922, the Association of German Engineers (VDI) conferred its highest award – the Grashof Memorial Gold Medal – on him at its annual meeting in Dortmund. This distinction was given "in recognition of the outstanding contribution made by this epoch-making design engineer to the creation of the modern motor vehicle and the development of the high-speed internal combustion engine." On December 29th 1929, Wilhelm Maybach passed away in Cannstatt at the age of 83. The automotive pioneer was also buried at Cannstatt's Uff-Kirchhof cemetery, alongside Gottlieb Daimler.