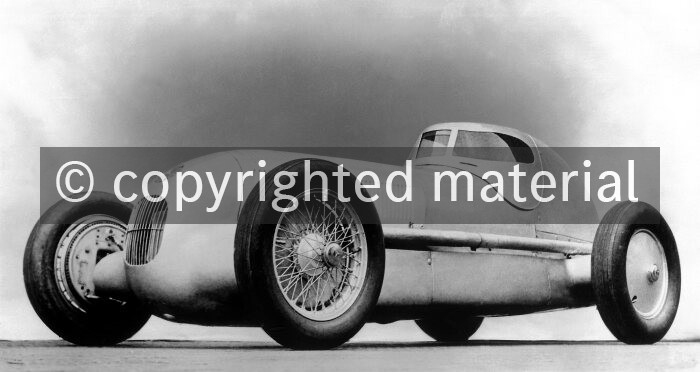 Record car based on the W 25 Grand Prix racing car

In 1934 the debut of the new supercharged-engine MB racing car, built according to the 750 kg formula by the two designers Nibel and Wagner, marked the beginning of the most successful racing epoch yet in the history of the Daimler-Benz company. The car, well-known under its factory designation W 25 – later called "silver arrow" – started its successful career by winning the first race in which it was entered, which was held on the Nürburgring.

In the same year, Mercedes-Benz sent the W 25 on a record hunt in Gyon near Budapest and on the Avus. The record car was equipped with the M 25 B engine (bore/stroke 82/94.5 mm, displacement 3980 cc, 430 hp at 5800/min), the body was modified for the each event. In both record attempts, the usually quite prominent grille opening was significantly reduced for improved aerodynamic drag in combination with a lower need for cooling air.

There were two versions of the bonnet: In Gyon, it had neither air intake nor outlet, only two crescent-shaped apertures on each side were fitted at the end of the bonnet. On the Avus, a bonnet with a lower roof line and a wider middle pane was used, and it possessed air intakes and outlets.

Caracciola dubbed these cars “racing limousines”, a designation which was adopted by the press office and immediately became common.