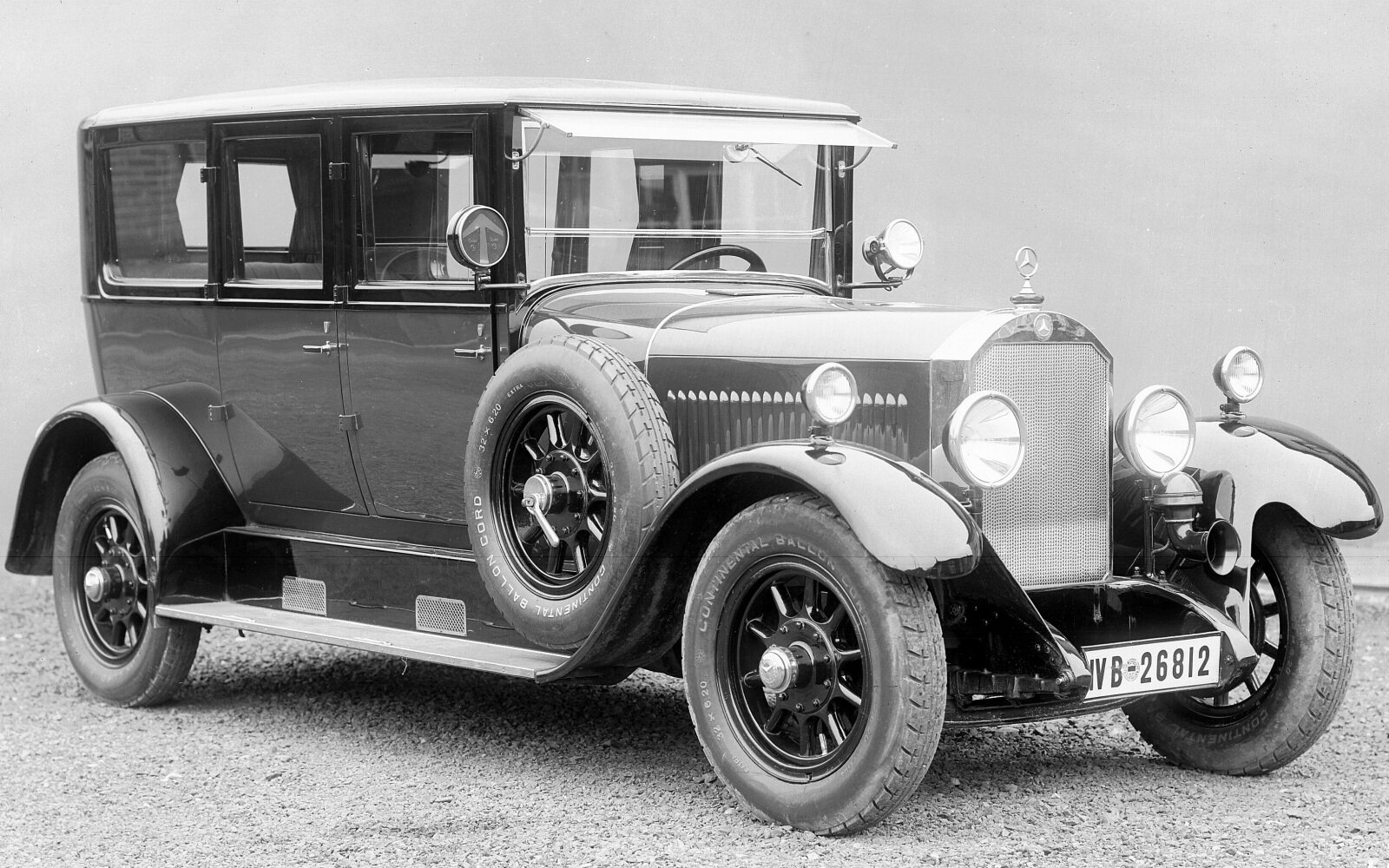 In May 1924, Benz & Cie. and Daimler-Motoren-Gesellschaft brought an end to over than 30 years of competition in the interest of customers and, under the pressure of the economic situation, entered into a community of interest. The ensuing period of consolidation was characterised by efforts to standardise the design and production processes and to amalgamate the administrative and field organisation functions to the maximum possible extent - measures that amounted to a de facto merger without, however, the last formal step being taken. One of the key concerns was to create a homogeneous product range of competitive vehicles whose production was to be shared between the existing plants.

By 1 May 1924, the date when the joint venture agreement came into effect, DMG had manufactured a total of 407 passenger car chassis units. Two thirds of these were for the four-cylinder supercharged vehicles launched in 1923, the remainder consisting of pre-war models production of which had resumed in 1919 after a more or less long interruption. Two other models that were being developed under the direction of Ferdinand Porsche were just short of production readiness. Out of the top drawer in terms of automotive engineering, these were totally new six-cylinder supercharged models with displacements of 4.0 and 6.3 litres. Launch and production start-up were scheduled for autumn 1924.

At the same time, the passenger car range of DMG's former rival Benz & Cie. was made up of three extremely solid, yet technologically uninspiring mid-size models: the four-cylinder 10/30 hp and the two six-cylinder models 11/40 hp and 16/50 hp.

In these economically challenging times, it was important to offer attractive, competitively priced products with which to win market share, especially in the mid-size segment. Clearly belonging to the luxury class, the two new Mercedes six-cylinder models did not enter into consideration for this purpose. The existing Benz models not only lacked front wheel brakes, which had begun to gain broad acceptance in 1924, but they also failed to meet the new trend of delivering the engine power demanded by customers from as small a displacement as possible. Consequently, the task facing the joint venture's single design office was to develop a new model with which to occupy the key, potentially lucrative upper mid-size segment. This project very soon began to place a heavy strain on the community of interest, as both partners had sharply diverging views on this issue.

Alongside the two luxury-class automobiles, in 1924 DMG was also developing a third model which, although designed according to similar principles, was not yet as far advanced as the large-displacement six-cylinder models. Likewise featuring a six-cylinder supercharged engine, it was designed to produce around 40 hp from its two-litre displacement, and as much as 60 hp with the supercharger in operation. At the board meetings of the community of interest, the two‑litre car was a source of heated debate. While DMG had planned to produce its small supercharged model in Mannheim, Benz claimed that the Untertürkheim design was not suited to the existing manufacturing facilities and would make production considerably more complicated and costly. Whereas Benz's objective was to achieve high unit sales through low prices, what DMG had in mind was a technically sophisticated, commensurately high priced automobile. Apart from that, Mannheim had already completed the design of a naturally aspirated two-litre swing-axle model.

In January 1925, Benz & Cie. decided to build not DMG's two-litre vehicle, but a 2.6‑litre side-valve model. However, DMG was to complete its development of the two-litre overhead-valve model in order to allow the start of production at a later date. The two-litre project had actually been resumed in July/August 1925, albeit under different circumstances than originally planned: in the months that followed, it became clear that Benz's long-standing preference for a low-cost model was the correct strategy, and design work was begun at top speed.

In January 1925, when it was decided to build a 2.6‑litre model in Mannheim, the start of series production was scheduled for January 1926. If possible, the development process was to be accelerated to enable the new model to be unveiled at the Berlin Motor Show, which was scheduled for autumn 1925. Neither goal was realised. By September 1925, it remained unclear as to whether the new vehicle should be built with four or six seats. It was, however, decided to make the new model lighter and cheaper, with a target sales price of below RM 13,000 for the open tourer version. Friedrich Nallinger, fearing that the 2.6‑litre model made no sense next to a two-litre six-cylinder engine, suggested the design of a more powerful engine for the 2.6‑litre chassis. Following various delays, it was the turn of the year before the newly designed powerplant went into testing. In January 1926, it was unanimously decided to install a three-litre engine in the same chassis instead of the 2.6‑litre unit, which is sometimes described in the existing literature as having a displacement of 2.5 litres. This decision gave the actual green light for the 12/55 hp model. Just one month later, the new engine was successfully tested and installed.

In October 1926, the three-litre Mercedes-Benz 12/55 hp finally made its debut at the German Motor Show in Berlin. The brochure characterised the "new, medium-power Mercedes-Benz six‑cylinder model", which had the internal designation W 03, as "the ultimate expression of the modern automobile". Its particular benefits included its "outstanding ride comfort, supreme acceleration and plentiful reserves of power" as well as "fast and safe braking, excellent suspension and secure road holding". Nevertheless, this model was not born under a lucky star. Despite all good intentions, it was quite simply too heavy, its chassis weighing over 40% more than that of the simultaneously unveiled two-litre model. This led to hectic activity on the design front.

The vehicles on show in Berlin, a pullman saloon, an open tourer and a chassis version, were powered by an in-line six-cylinder side-valve engine with a two-piece engine block (engine design code M 03). While the crankcase was cast from light alloy, the cylinder block and cylinder head were of cast iron. The bore/stroke ratio was initially 74 x 115 mm, equivalent to a displacement of 2968 cc. The M 03 was the last production passenger car engine from Daimler-Benz to be equipped exclusively with magneto ignition. Still in November 1926, just a few days after the Berlin Motor Show had closed its doors, the Board of Management decided to add 2 mm to the bore in order to increase displacement to 3131 cc and to make full use of the 12 fiscal hp limit. The same change was also to be implemented on previously produced engines in order to prevent different versions being delivered to customers. The main purpose of the increased displacement was to improve the elasticity of the engine, there being no change in power output. Nor, however, was there any change in the slightly unrefined running of the engine.

Already in January 1927, therefore, the Board of Management decided to subject the engine of the 12/55 hp to further modification. Although the new powerplant used from October 1927 onwards retained the same bore/stroke ratio of 76 x 115 mm, it had been radically modified in its overall design. The engine block was now of one-piece cast iron, while only the bottom part of the crankcase was still of light alloy. In an effort to reduce vibration, the crankshaft had been redesigned and provided with seven main bearings instead of the previous four. The somewhat antiquated high-voltage magneto ignition was replaced by battery ignition. In view of such radical modifications, the engine was given the new design code M 04, the vehicle consequently being named W 04. From February 1928, the three-litre vehicle, which actually had a displacement of 3.13 litres, was known as the 12/55 hp 320 model.

In autumn of the same year, the M 04 engine was superseded by the M 09. The cylinder dimensions were now 80 x 115 mm, which increased the displacement to 3.5 litres. Known within the company as W 05, the vehicle powered by this engine was given the official designation 14/60 hp 350. Yet this version, too, proved to be short-lived. All vehicles of this model family were available as open tourers or saloons (each in 4/5‑seater or 6‑s eater versions) or as 2/3‑seater or 4/5‑seater convertibles. Alternatively, it was possible to order just the chassis for the mounting of a third-party body by the then numerous coachbuilders.